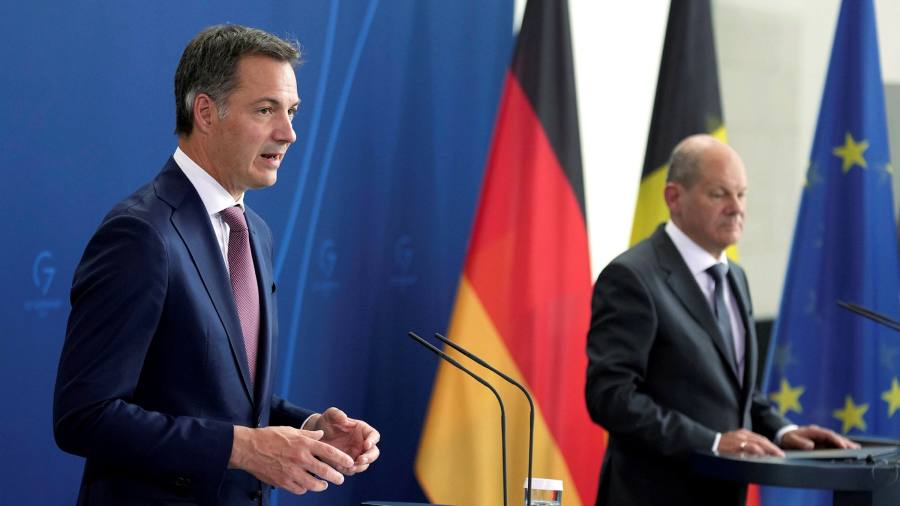 Guten Morgen from summery Berlin, where the political atmosphere is clouded not just by the war in Ukraine, but also by what officials regard as the last thing Europe would need right now: the UK unilaterally scrapping the Northern Ireland protocol. We will bring you up to speed with what the leaders of Germany and Belgium had to say about Boris Johnson’s latest threat.

In energy transition news, we are exploring why major oil companies lobbying the European Commission have come in the crosshairs of transparency watchdogs.

And after having secured a one-on-one meeting with Elon Musk, EU internal market commissioner Thierry Breton claims that the richest man in the world was receptive to his regulatory explanations. But just a day later, Musk appeared to have learnt very little from his exchange with the Frenchman.

This article is an on-site version of our Europe Express newsletter. Sign up here to get the newsletter sent straight to your inbox every weekday and Saturday morning

Boris Johnson’s latest threat with scrapping the post-Brexit arrangement for Northern Ireland is testing the limits of EU leaders’ patience, write Valentina Pop in Berlin and Jude Webber in Dublin.

Johnson, UK prime minister, told his Irish counterpart Micheál Martin that the current agreement with the EU was “not sustainable in its current form” and two senior government insiders said the UK was preparing to announce legislation to rescind elements of the Northern Ireland protocol as soon as next week.

“[The protocol] is something that the British have asked for,” said Belgium’s prime minister Alexander De Croo during a joint news conference with his German counterpart in Berlin yesterday. “They asked for that element and now it seems to be a problem,” De Croo said, noting that it was not the first time such London had made such threats.

“Our message is clear: ‘Don’t touch it. This is something we agreed on and agreements need to be respected’,” he said.

Germany’s chancellor Olaf Scholz struck a more diplomatic note, but the message was the same: “We carefully discussed Brexit, we found a good way forward for Northern Ireland. No one should call off the agreement unilaterally.”

Scholz warned that cancelling the protocol would threaten peace on the island of Ireland.

Martin, Ireland’s taoiseach, who spoke to Johnson yesterday, said he warned the British prime minister against “any unilateral action at this time, which would be destabilising for Northern Ireland and erode trust”.

Asked if the EU would compromise, Thomas Byrne, Ireland’s minister for European affairs, said last night that “the protocol is the compromise”.

“The European Commission has proposals on the table to reduce the checks going into Northern Ireland,” Byrne said. “There is a huge opportunity to make adjustments within the protocol and the British so far haven’t grasped those opportunities.”

From a geopolitical standpoint, a collapse in EU-UK relations would undermine western unity in the face of Russian aggression, said an EU diplomat, warning that it would delight Vladimir Putin.

Read more here on why Europe’s largest asset manager is betting that the euro will fall to parity with the US dollar this year as the mounting threat of recession prevents the European Central Bank from lifting interest rates above zero.

Big fossil-fuel companies that for years increased their reliance on Russia are now being closely consulted on how far and fast to reduce it, writes Andy Bounds in Rotterdam.

According to Corporate Europe Observatory (CEO), a transparency campaign group, the commission met the bosses of Shell, Vattenfall, Eon, Eni, Total and BP on three occasions in March ahead of the commission’s REpowerEU strategy publication on March 23.

The meetings were arranged by the European Round Table (ERT) business lobby group, it says. Meeting notes from March 21 and 23, compiled by commission president Ursula von der Leyen’s office, include several measures that were in the commission’s REpowerEU plan.

The majority of bosses also warned against agreeing to demands from Spain and other member states to decouple gas prices from electricity prices, which has driven them far higher than the cost of production and brought windfall profits to generators.

They opposed a gas price cap, as favoured by Italy, Greece and Belgium. The commission rejected a price cap but Spain and Portugal won temporary permission to decouple prices after appealing to European leaders.

The commission and the companies also set up a joint task force to determine “what is feasible” in terms of other policies. Brussels is currently working on a new REpowerEU energy plan, scheduled for May 18, that will have to be even more ambitious given the planned oil embargo on Russia.

Pascoe Sabido, researcher for CEO, said the task force should be scrapped.

“The European Commission has been in bed with these corporations for decades. If we want to end our reliance on gas, Russian or otherwise, then we need to end the relationship between the fossil-fuel industry and decision makers, cutting fossil-fuel interests out of our political system.”

A commission spokesperson said that when drawing up policy, the commission speaks to “all relevant stakeholders who are crucial to make the shift happen on the ground”.

However, he added: “At the end of the day, it is the commission that decides on the policy orientation, always acting in the common European interest, and not in the interest of one or another sector.”

A spokesman for ERT said: “The business leaders in the ERT delegation provided their perspectives on the myriad implications of the war, in particular on the question of how to address the complexities of EU energy dependence on Russia gas and how best to accelerate the green transition.

“Each of these meetings was communicated publicly, either by von der Leyen or by ERT.”

Thierry Breton, the EU’s commissioner for the internal market, has added arguably the most high-profile tech chief executive to his collection of meetings in a two-hour encounter with Elon Musk, writes Javier Espinoza in Brussels.

Today @elonmusk and I wanted to share a quick message with you on platform regulation 🇪🇺#DSA pic.twitter.com/nvP5FEXECY

The meeting emerged just days after Breton warned Musk that he has to follow EU rules if he buys Twitter. The commissioner and the entrepreneur met at the Tesla factory in Texas on Monday after a series of exchanges over text messages, Breton told Europe Express.

Breton said Musk was very receptive to his philosophy behind the Digital Services Act, a piece of legislation aimed at clarifying the role of social media on how they police content online, including disinformation and hate speech.

But yesterday, Musk struck a defiant stance when he said that it was “morally wrong and flat-out stupid” to ban former US president Donald Trump — a decision that Twitter took in the wake of the storming of the US capitol in 2021 when the social media platform found that Trump’s tweets amounted to “incitement to violence”.

Are you enjoying Europe Express? Sign up here to have it delivered straight to your inbox every workday at 7am CET and on Saturdays at noon CET. Do tell us what you think, we love to hear from you: europe.express@ft.com. Keep up with the latest European stories @FT Europe