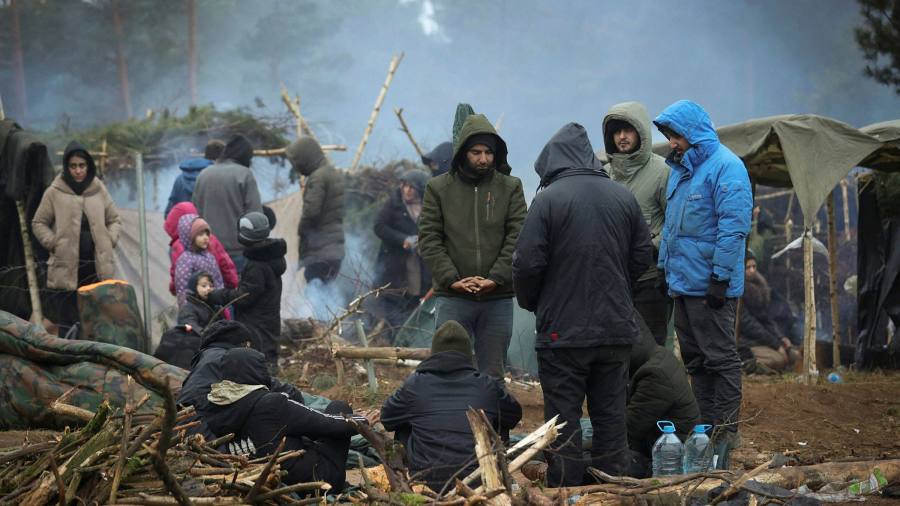 A packed week is ahead of us, with foreign ministers gathering today to discuss a fresh batch of sanctions against the Belarusian regime and hold talks with their counterparts from other eastern neighbours, amid warnings from Ukraine that Russia is preparing another offensive. After the FT’s scoop on Friday on what the Belarus sanctions will entail, we’ll give you the rundown of what to expect today.

On the Brexit front, fisheries ministers are also in Brussels today and will receive an update from the European Commission on the negotiations with the UK for the 2022 shared quotas — including the dispute with France over fishing rights.

Having failed to come to a compromise with the European parliament last week, finance ministers are having another attempt today at pushing the bloc’s 2022 budget over the finish line.

And the arrival of Santa Claus in Dutch-speaking cities took place over the weekend with a slight change to the character of ‘Black Pete’ following years of anti-racism protests over people wearing blackface. While the actors are now mostly smudging grey paint on their faces to suggest the character’s trip down the chimney, I’ll look at why activists remain unimpressed.

This article is an on-site version of our Europe Express newsletter. Sign up here to get the newsletter sent straight to your inbox every weekday morning

Trouble in the neighbourhood

EU’s foreign affairs councils are often a hand-wringing exercise, but today’s meetings about the eastern neighbourhood — notably on Belarus — will be more consequential than usual, write Mehreen Khan in Brussels and James Shotter in Warsaw.

Foreign ministers today are expected to approve a new legal basis for a fifth round of sanctions against Minsk. As the FT wrote on Friday, more than two dozen Belarusian officials are likely to be added to the sanctions list, as well as Syrian airline Cham Wings for running flights to Belarus, Hotel Minsk for housing migrants in the country, and possibly Minsk airport.

Diplomats said the final list of people and entities would take weeks to finalise as the EU co-ordinates the measures with the UK, Canada, and the US.

EU foreign policy chief Josep Borrell said yesterday that foreign ministers are expected to approve the widening of the sanctions framework as part of measures to press authoritarian leader Alexander Lukashenko to stop the flow of migrants to Europe’s borders.

Borrell said he had held a phone call with the Belarus foreign minister Vladimir Makei to raise the “precarious humanitarian situation” at the border with the EU. “The current situation is unacceptable and must stop. People should not be used as weapons,” he tweeted after the call. The Belarusian foreign ministry confirmed the call had taken place and said it was prepared for “mutually respectful dialogue” with the EU.

Fears about the humanitarian situation at the border are only growing. Grupa Granica, a group of organisations helping migrants, said that those arriving at the Polish-Belarusian border were subject to disinformation by the Belarusians “who distribute forms which suggest the possibility of settlement in Poland or Germany”. The group added that it had also received information about attempts to force migrants to use violence against Polish forces guarding the border.

Later today, ministers will also hold an exchange with their counterparts from the so-called Eastern Partnership countries (Armenia, Azerbaijan, Georgia, Moldova and Ukraine). Several of them have been experiencing various degrees of Russian pressure and are looking to the EU for help.

Ukraine’s deputy defence minister told the FT that western intelligence suggests a “high probability of destabilisation” of the country by Russia as soon as this winter after Moscow massed more than 100,000 troops at its border.

Moldova recently declared a state of emergency after being threatened by Russian state-owned group Gazprom to face a winter with no gas supplies. A new gas contract was signed only when the pro-EU government agreed to delay some EU-inspired reforms to the country’s energy market.

Discussions with Georgian officials are likely to be difficult after the country’s former president Mikheil Saakashvili, a strong western ally, was recently taken to hospital while in detention and after files published in local media alleged the country’s secret services had spied on the EU ambassador.

Tomorrow, foreign ministers will be joined by defence ministers and Nato chief Jens Stoltenberg to discuss the EU’s new ‘strategic concept’ (We wrote about it here).

In recent weeks, Covid-19 cases in Europe have risen to their highest 14-day rolling average for nine months, casting doubts over the region’s economic recovery. While some countries, including Austria and the Netherlands are reimposing lockdowns for the unvaccinated and limiting the opening hours of shops, economists are confident that full-blown lockdowns as seen in 2020 can be avoided.

The return of Black Pete

Ten years after the start of a campaign dubbed “Kick out Black Pete”, cities in the Netherlands and Belgium this weekend celebrated the arrival of Santa Claus together with his medieval-era-costumed helpers, who are now in large part rebranded as “Sooty Pete” or just “Pete”.

Wearing blackface for Zwarte Piet, complete with curly black wigs and golden ear hoops is still considered an untouchable tradition in rightwing nativist circles (the party of Geert Wilders, for instance here). Pro-Black Pete demonstrators in past years have clashed violently with protesters who say Black Pete is a racist symbol.

But after last year’s Black Lives Matter protests in Amsterdam and other major Dutch cities, Prime Minister Mark Rutte has acknowledged publicly that the Black Pete tradition needs to change, and that he himself has been ignorant as to how hurtful this symbol can be to adults and children of colour.

Local authorities in major Dutch cities and in the Belgian port of Antwerp have now changed tack and insist the celebrations only include helpers with grey, “soot”-smudged faces.

Nevertheless, about 100 anti-racism protesters gathered in the Dutch city of Breda, chanting “Kick Out Black Pete”. Jerry Afriyie, co-founder of the campaign, who was arrested in 2011 when he first protested peacefully against the tradition, said some progress had been made in the decade since. “But we are not there yet,” he told reporters in Breda.

The moves taken by the EU will also have global consequences, and such moves might create further stress to the global supply and industry chain

Are you enjoying Europe Express? Sign up here to have it delivered straight to your inbox every workday at 7am CET. Do tell us what you think, we love to hear from you: europe.express@ft.com.