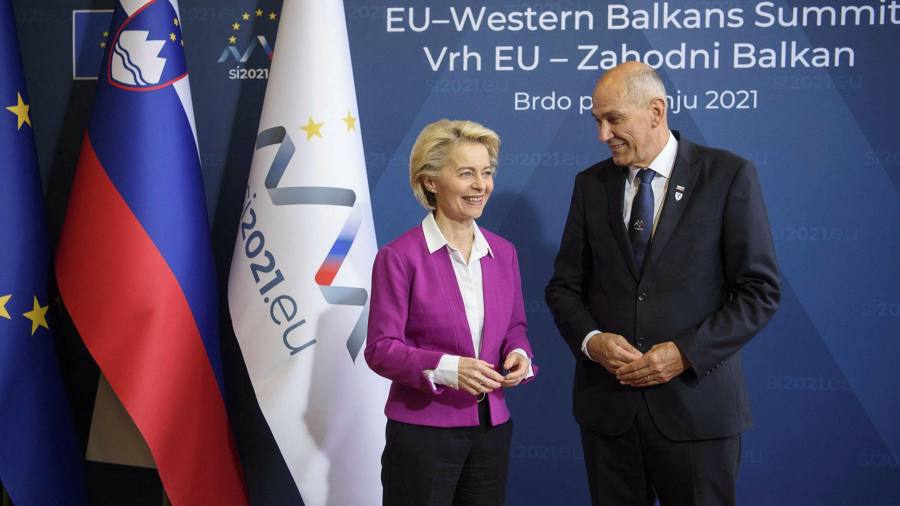 The EU on Wednesday committed nearly €30bn to the western Balkans to aid development and propel its countries towards membership — but stopped short of committing to a date for an enlargement.

Expanding the EU to include the six countries remains a contentious issue across much of the 27-nation bloc. Slovenia, holder of the EU’s rotating presidency, last month urged the EU to admit the six countries by 2030. Some member states, including Germany, resisted the idea of deadlines.

The EU said it would provide €9bn in grants and €20bn of investment over seven years, and reaffirmed a commitment to expand.

“The western Balkans is part of the same Europe as the European Union,” European Commission president Ursula von der Leyen told a press briefing after a joint summit of the member states and the six countries — Albania, Bosnia, Kosovo, Montenegro, North Macedonia and Serbia.

“We want the western Balkans in the EU,” von der Leyen said. “There cannot be any doubt.”

The €30bn package can be used for investments in energy, digital networks, roads and other sectors. The EU is keen to preserve as much influence as possible in the region as rivals including China also step up investment.

The six prospective member states are at various stages of development, some held back by formalities, while others face more serious hurdles.

North Macedonia’s EU talks cannot start because of a veto by Bulgaria, a member state. That also halts talks with Albania, whose accession is handled together with North Macedonia’s.

“We are sorry that only one of the 27 member states is blocking the process for North Macedonia,” North Macedonian prime minister Zoran Zaev said at the summit.

Bulgaria holds general elections next month — its third this year after two inconclusive votes in April and July — and a new government will hopefully end the stalemate soon, Zaev said.

Serbia should work out an agreement with Kosovo, its former province that broke away in 2008 and which Belgrade refuses to recognise, leaders said.

Von der Leyen said last week’s agreement to de-escalate tensions between Belgrade and Pristina were an example of the EU’s pacifying effect.

Serbian president Aleksandar Vucic acknowledged that the issue must be resolved before EU accession becomes a reality for his country.

Slovenian prime minister and summit host Janez Jansa said the alternative was undesirable. “If that (enlargement) perspective is not ensured, certain tragic events from history could be repeated, and I don’t think anyone wants to repeat that,” he said, alluding to the violent conflicts engulfing the region after the break-up of Yugoslavia in the 1990s.