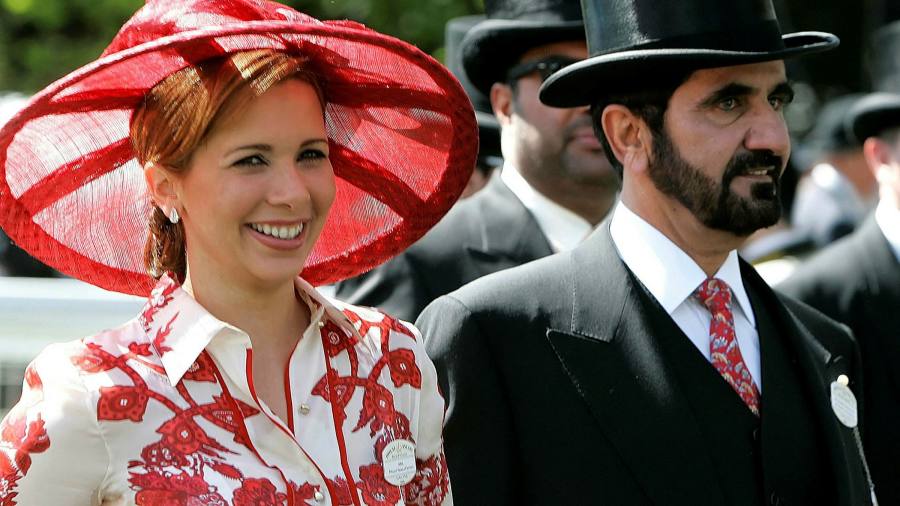 So bad were relations between Princess Haya and her estranged husband Dubai’s billionaire ruler that she felt “hunted all the time” and that there was “nowhere for me to go to be safe”, even in the UK, where she had built a new life after their relationship imploded.

The bitterness of the battle between her and Sheikh Mohammed bin Rashid al-Maktoum became clear in eleven explosive court rulings made public in London this week that threaten to tarnish the international reputation of one of the Gulf’s most important leaders.

The rulings set out how Sheikh Mohammed was “prepared to use the arm of the UAE State to achieve his own aims in relation to the women in his family” and to wage a wider “campaign of fear and intimidation” against Princess Haya.

The findings of a High Court judge that Sheikh Mohammed was prepared to use his “immense wealth, political power and international influence” against Haya — including allowing his agents to hack her phone using NSO Group’s Pegasus military-grade spyware — have repercussions beyond the Gulf state.

The vice-president and prime minister of the United Arab Emirates has deep ties to the British establishment. He has been a guest of the Queen at Royal Ascot and he is a major player in the horseracing world through his massive Godolphin stables. The rulings also come as post Brexit Britain hopes to build stronger ties with the Gulf, already a big trading partner.

But during the past two years darker details of Sheikh Mohammed’s personal life have been thrust into the public arena as a result of his long running court battle with Princess Haya over their children. The princess fled to Britain in 2019 with their two children. The High Court has already found as part of the case that the ruler of Dubai orchestrated the abduction of two of his adult daughters Sheikha Latifa and Sheikha Shamsa, the former in international waters off the coast of India in 2018 and the latter from England in 2000.

This week brought further revelations. One court ruling sets out how the Sheikh and his agents plotted to keep tabs on Princess Haya, his sixth wife and the half sister of the King of Jordan, by buying the £30m Parkwood estate in Berkshire which is close to Haya’s Castlewood mansion.

Princess Haya was so concerned about the possible proximity of her ex-husband that her lawyers successfully applied to the High Court to extend an existing non molestation order. The injunction banned the Sheikh or his associates from a 100-metre exclusion zone around her property and a 1,000 feet no fly zone above it to protect her and blocked any purchase of the 77-acre estate.

According to the ruling, Princess Haya testified: “The prospect of Sheikh Mohammed, or those on his behalf buying the properties around Castlewood is terrifying and utterly wearing. It feels like the walls are closing in on me. I feel like I am defending myself against a whole “state”.

She said: “It feels as if I am being stalked, that there is literally nowhere for me to go to be safe from (the father), or those acting in his interests. It is hugely oppressive”.

Every time I think a resolution may be in sight, the ground shifts again, and the finish line recedes further into the distance.

Haya told the court that the past two years since she left Dubai have been “beset by threats and pressures” which also included constant security threats, misrepresentation of the couple’s court case in the Arab press and by her former husband’s “violent and threatening poetry”, according to her testimony contained in another court ruling dated June 2021.

The surreptitious hacking of Princess Haya’s phone and that of five associates including Fiona Shackleton, Haya’s eminent divorce lawyer who has also represented Prince Charles and Paul McCartney, was discovered purely by chance by a US academic, according to a court ruling on the phone hacking. Later that day Baroness Shackleton was alerted to the hacking again by Cherie Blair QC, a barrister and wife of former prime minister Tony Blair who advises NSO on human rights issues.

NSO told the court it became aware of a potential hack a day earlier, but at least one of the phones in question had been targeted months previously.

Sheikh Mohammed this week denied the allegations. He said in a statement: “These matters concern supposed operations of State security. As a head of government involved in private family proceedings, it was not appropriate for me to provide evidence on such sensitive matters either personally or via my advisers in a foreign court.” He added that the court findings are “based on an incomplete picture” and based on evidence “that was not disclosed to me or my advisers” and that “they were made in a manner which was unfair.” he said.

In Britain the hacking has prompted calls for action by members of the opposition Labour party. One Labour MP Chris Bryant has urged the foreign secretary Liz Truss to review the relationship with Dubai. There has been concern that Shackleton, a member of the House of Lords, had her parliamentary email targeted. The UK Foreign Office described the “UK-UAE bilateral relationship as strong” and said cyber capabilities should be used in a way that “is legal, responsible and proportionate”.

The Metropolitan Police opened a five-month investigation into the phone hacking last year but closed its probe in February without charges being brought.

But back in the Middle East, the revelations have gone unreported by the local media, with Sheikh Mohammed’s private life seen as no one else’s business. He is revered in the UAE as a modernising and visionary leader who changed Dubai from a regional trade entrepot into a global business and tourist destination.

The UK-UAE relations slumped to a nadir in 2018, when British student Matthew Hedges was detained in solitary confinement for months, accused of being an MI6 spy before being convicted and later pardoned.

Since then, the pandemic has reaffirmed the importance of resetting the historic relationship, culminating in the signing last month of a “partnership for the future” that included a UAE pledge to invest £10bn in clean energy, technology and infrastructure in the UK.

On Friday Boris Johnson’s UK government kicked off preparations for a post-Brexit trade deal with the Gulf Cooperation Council by launching a 14-week consultation ahead of formal negotiations starting in 2022. The UAE is the second-biggest economy in the six member GCC. The chair of a UK parliamentary group on human rights in the Gulf accused the government of “hypocrisy” over the talks because of the repression of civil society and the persecution of dissidents in Saudi Arabia, Bahrain and the UAE.

Against that backdrop, the court battle between Sheikh Mohammed and Princess Haya is set to rumble on.

As she told the court: “Every time I think a resolution may be in sight, the ground shifts again, and the finish line recedes further into the distance. At times, I am exhausted by trying to keep my balance and a level head in the face of the magnitude of what I face.”