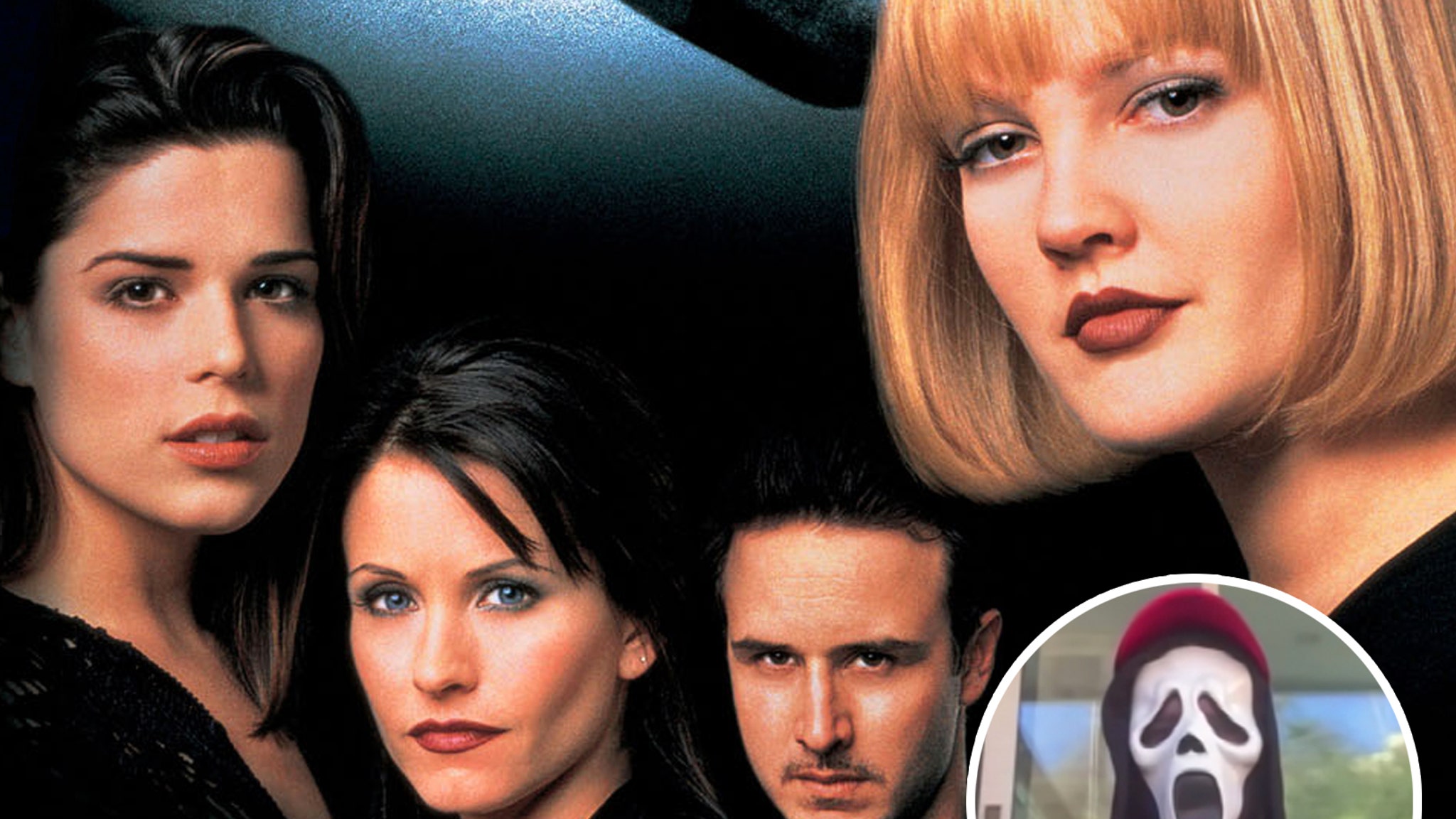 Neve, Courteney and David talk about how the franchise changed their life … and those bangs.

Drew Barrymore may not have lived past the first five minutes of the OG “Scream,” but 25 years later, she reunited with her former costars for a week-long celebration of the franchise on her talk show.

On Mondaym, Neve Campbell, Courteney Cox and David Arquette joined the 46-year-old to promote the fifth movie and reminisce on how the slasher series has changed their lives.

During a segment where fans had the opportunity to ask the stars a question, the group was met with a mystery fan under the iconic Ghostface mask who asked, “Do you think the character of Randy died too soon?”

“For sure, of course!” Neve replied, while her two cast members nodded in agreement, “We’d love to have Randy back.” Barrymore then asked the fan to remove the mask to reveal a surprise guest, Jamie Kennedy. Kennedy, of course, played Randy in the first film and was killed off midway through the sequel.

Kennedy stroked his beard after his reveal and joked with the cast, “Sorry guys, I didn’t get to shave yet!” Drew then asked Jamie to share “a fly on the wall memory” — or, one thing about his scream experience that no one knew.

The 51-year-old actor joked that he had always felt like the fourth or fifth wheel when it came to hanging out with his cast members, some of whom were in budding relationships with each other at the time.

Later in the show, when Barrymore asked Campbell how the film had changed her life, she said the original “gave me everything, it was a spring board I think for all of us.” She added, “Its success really helped pave the way for all of us in our careers and my life would be very very different without ‘Scream.’

Arquette revealed that while the iconic 2000s horror movie had also served as a boost to his acting ventures, he credited the franchise for one of his greatest joys in life: 17-year-old daughter Coco, who he shares with Cox. “We had a daughter out of it and she’s the greatest thing in my life,” he said earnestly. “Yeah, so that really is the most impactful thing that has ever happened to me in this business.”

As for Cox, the “Friends” star jokingly admitted that the franchise had left a more apprehensive mark on her life. “Well besides the obvious, I will not go to the bathroom in a movie theater or just about any sports arena,” she joked, referring to Scream 2’s opening kill.

“I always look underneath and prefer just not to go. I will not go into a parking lot by myself and if I do my heart is racing and I am constantly looking,” she added, likely referring to Alison Brie’s death in the fourth film.

Although Cox remains grateful for the experience, the 57-year-old actress does have one regret when it comes to the films — those bangs.

In an effort to bring her character to life, Courteney revealed that she would try a different hairstyle for each of the films, but cutting bangs for “Scream 3” was a decision that she labeled as “the worst.”

“Each ‘Scream’ I would try to come up with a different look for her that was just over the top gross, or ugly or too much,” she said.

“There was nothing worse. That was a big lesson in life because that will forever be on film and we only had one set. One set of bangs. I remember they were cut on the set,” Cox revealed. “You are supposed to have a thing that starts back here, far back and that’s where the part goes for the bangs. For some reason they put it here and started cutting it and I was like, ‘Well I don’t have a choice now.'”