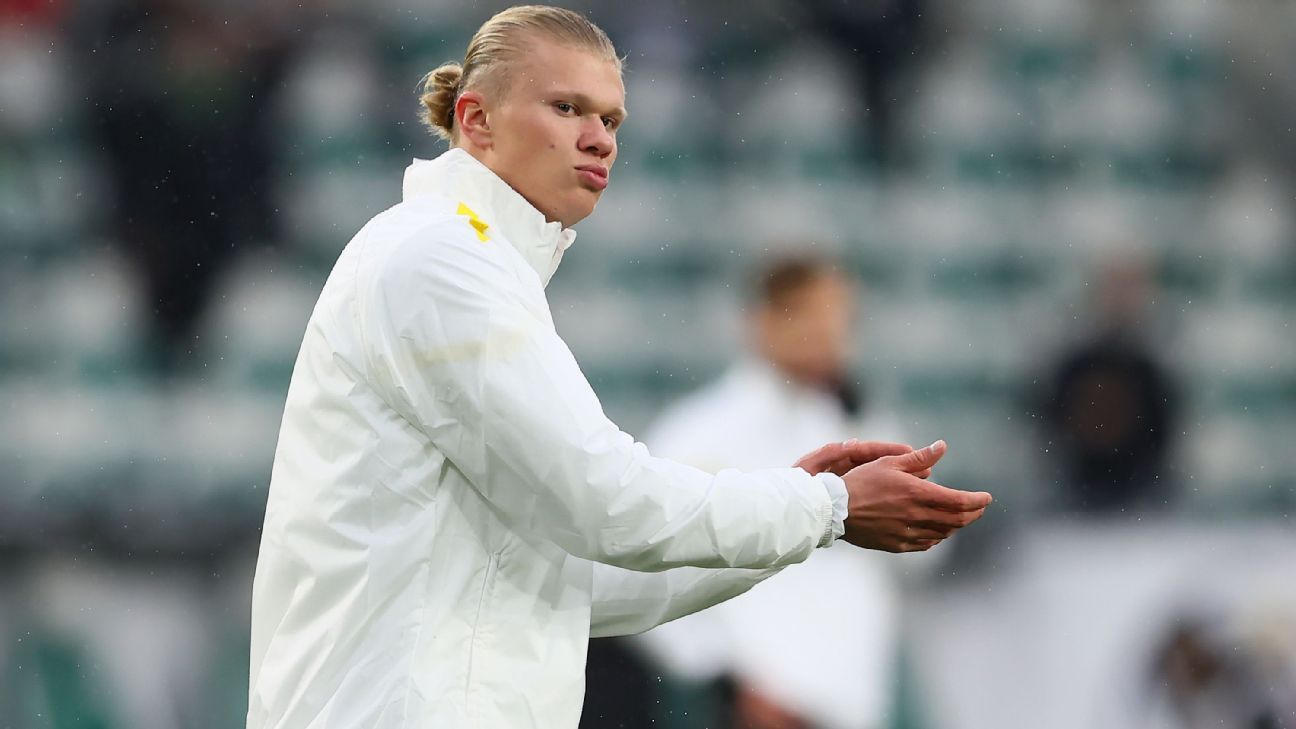 The 2022 January transfer window is open (find out when it closes here), and there’s plenty of gossip swirling about who’s moving where. Transfer Talk brings you all the latest buzz on rumours, comings and goings and, of course, done deals!

Borussia Dortmund are preparing for contract talks with striker Erling Haaland, his father Alf-Inge and agent Mino Raiola next week, reports SportBILD. And they reportedly want him to make a decision about his future by the end of January.

Haaland, 21, can reportedly leave Dortmund at the end of this season if a club triggers his €75 million release clause. Sources have told ESPN the fee will be inflated by a significant payment to Haaland’s representatives for brokering a deal, while senior figures from interested clubs have been made aware that the striker expects wages that would see him earn in excess of €550,000-a-week.

Manchester United, Manchester City, Chelsea, Bayern Munich, PSG, Barcelona and Real Madrid are all in the race to sign the Norway forward, with Raiola holding talks with some of Europe’s top clubs last year.

“Maybe this summer, maybe the summer after. But there is a big chance that Erling will leave this summer,” Raiola told Sport1 in December.

Haaland has scored 76 goals in 76 games for Dortmund after joining from FC Salzburg for around €20m midway through the 2019-20 season, despite attempts from Manchester United and former manager Ole Gunnar Solskjaer to bring him to the Premier League.

Sources told ESPN that Haaland will consider interest from a range of clubs when he leaves Dortmund, but Real Madrid are the leading contenders to sign the player, while the Spanish club are also trying to land Kylian Mbappe as a free agent when his PSG contract expires at the end of this season.

09.50 GMT: Ousmane Dembele will not leave Barcelona in the January transfer market, despite the player’s refusal to sign a new contract, according to El Larguero.

Dembele, 24, becomes a free agent this summer and Barca are keen for the player to extend his deal. The club gave him an ultimatum to accept their latest offer or leave this month.

However, the France forward will only continue at Barca if his requests are met and intends to join a Premier League club this summer if not.

09.41 GMT: Atletico Madrid are already planning for the 2022-23 campaign without Luis Suarez, Cadena Cope reports. The Uruguay forward has not signed a new contract with Atletico with his current deal ending this summer.

Suarez, 34, has scored nine goals in 24 appearances in all competitions for the Rojiblancos this season. The former Barcelona and Liverpool star joined Atletico in September 2020 but is a reported target of MLS clubs, including Inter Miami.

09.22 GMT: Tottenham Hotspur are interested in signing Jesse Lingard on a free transfer from Manchester United in the summer, sources have told ESPN.

Lingard will be out of contract in June and Tottenham are among a host of clubs who are keen to sign the 29-year-old England international.

There has been interest from other Premier League clubs as well as clubs in Spain and Italy including Barcelona and AC Milan.

Sources have told ESPN that Tottenham have registered their interest in Lingard but are yet to make a formal offer.

09.04 GMT: Jesus ‘Tecatito’ Corona is closing in on a move to Sevilla, sources have told ESPN’s David Cartlidge.

The Spanish side are in the final stages of the deal with Porto and sources said that the Mexico International will leave for a small fee given that his contract expires in June.

The 29-year-old has been a long-term target for sporting director Monchi, as well as Julen Lopetegui, who coached Corona when he was in charge of Porto. Lopetegui has stressed the importance of Corona’s versatility and experience as Sevilla continue to push on in various competitions.

08.30 GMT: Manchester United will prioritise a new contract for Marcus Rashford this summer, sources have told ESPN, despite concerns within the club over the forward’s ongoing search for his best form.

The 24-year-old’s present current at Old Trafford expires in June 2023, although United have the option of extending those terms by a further 12 months which, sources have said, they fully intend to do in order to secure the England international to the club until the end of the 2023-24 season.

Having seen midfielders Paul Pogba and Jesse Lingard both enter the final six months of their contracts at United this month and prepare to leave as free agents in the summer, the Old Trafford hierarchy are determined to avoid a similar situation arising with Rashford, who has become one of the club’s most high-profile players since scoring twice on his debut as an 18-year-old against FC Midtjylland in Feb 2016.

Sources have told ESPN that United are confident that Rashford is prepared to commit his future to the club, but the player’s loss of form is an issue that coaching staff and senior figures are determined to address.

– Real Madrid are continuing talks with midfielder Luka Modric over a new contract, but Tottenham Hotspur could offer the Croatia international a return to north London if he’s unable to agree fresh terms with Los Blancos, according to Ekrem Konur. The 36-year-old is out of contract in the summer, with January providing the opportunity to negotiate a pre-contract with clubs abroad.

– Newcastle United are eyeing two potential alternatives to transfer target Lille centre-back Sven Botman, reports Calciomercato. The Magpies have reportedly had a move turned down for Botman and are now looking at AS Monaco‘s Benoit Badiashile and Everton‘s Mason Holgate as fallback options to bolster their defence.

– Juventus have joined the race for Lyon midfielder Bruno Guimaraes, writes Calciomercato. The 24-year-old has been linked with a number of clubs this month, with the Old Lady thought to be the latest as they look to reshape their midfield, but OL are reportedly holding out for a transfer fee of €50m before sanctioning the Brazil international’s departure.

– AS Roma were heavily linked with a move for Arsenal midfielder Granit Xhaka last summer, but they could be back in for him this year, according to Gazzetta dello Sport. Jose Mourinho is reportedly looking to revisit a move for the Switzerland international at the end of the season, having already signed Gunners midfielder Ainsley Maitland-Niles on loan for the remainder of the campaign.

– Newcastle United are set to sign Burnley striker Chris Wood, according to Fabrizio Romano. The New Zealand international is said to have a £20m release clause, which the Magpies are willing to meet, and aim to complete a deal soon amid the absence of the injured Callum Wilson.