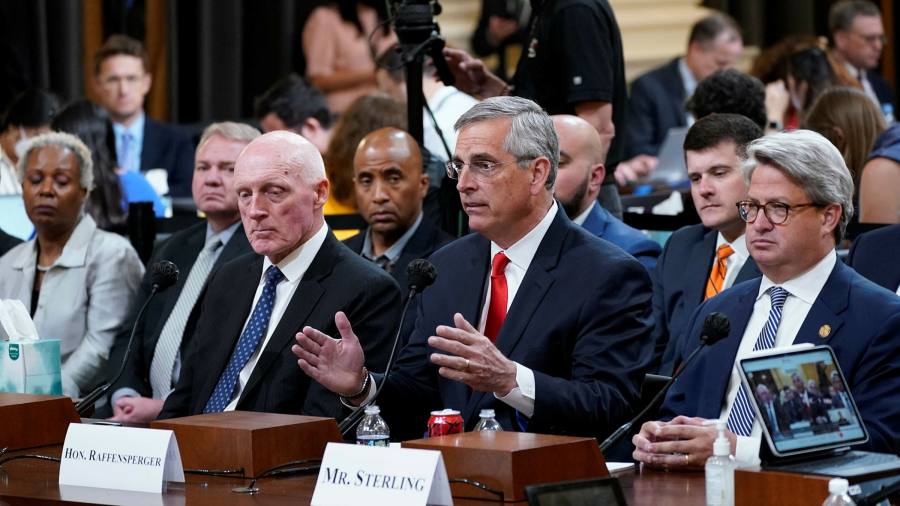 Donald Trump and his lawyers bombarded Republican state officials with telephone calls as they put pressure on them to overturn the 2020 election, a congressional committee heard on Tuesday.

Several senior Republicans in swing states told members of the bipartisan panel investigating last year’s attack on the US Capitol they had been called multiple times by the former president himself or by his senior lawyers in the aftermath of the vote.

Some described how lawyers including Rudy Giuliani, the former New York mayor, called on them to decertify their states’ results or to send false slates of electors to Washington DC in an attempt to announce Trump the winner.

Rusty Bowers, the Republican speaker of the Arizona House of Representatives, said he told the former president: “You’re asking me to do something that is counter to my oath, which I swore to the constitution to uphold, and also to the constitution and the laws of the state of Arizona. This is totally foreign.”

Brad Raffensperger, the Georgia secretary of state, went into detail about a now-famous 67-minute telephone call with Trump in which the former president urged him to “find 11,780 votes”.

Raffensperger described how he had repeatedly told Trump his claims of electoral fraud were wrong, but said that the president did not listen and even refused to look at evidence that Raffensperger said helped prove his case.

Trump and his lawyers pushed officials to reject election results as part of a scheme to have him falsely declared the winner of the 2020 election. The pressure campaign formed part of what committee members have previously said was an attempted coup by the former president.

“This pressure campaign brought angry phone calls and texts, armed protests, intimidation and all too often threats of violence and death,” said committee member Adam Schiff, referring to state officials’ accounts of threatening behaviour from constituents who believed the election had been stolen.

Trump’s plan relied on the arcane system of certifying US presidential elections, which requires states to choose slates of electors who will officially submit their results to the Congress in Washington DC.

The former president pushed state officials to choose “alternative” slates of electors who would declare him the winner even in states where he had lost the vote. When they refused, his campaign put together teams of fake electors to submit their results anyway.

Schiff said: “State legislators were singled out. So too were statewide elections officials, even local elections workers diligently doing their jobs were accused of being criminals and had their lives turned upside down.”

Several witnesses described receiving death threats after being targeted by the former president.

In an emotionally charged appearance, Wandrea Moss, who was an election officer in Georgia, told members of the committee that she had barely left her house since Trump began claiming she and her mother were part of a conspiracy to defraud voters.

Trump supporters targeted Moss and her mother Ruby Freeman after the then-president and Giuliani started claiming falsely that they had illegally fed fraudulent votes through voting machines.

“I don’t want to go anywhere,” she told members of the committee. “I second-guess everything that I do. It’s affected my life in a major way, in every way — all because of lies and me doing my job.”

In video testimony, several state-level Republicans described how their contact information had also been published by Trump or those close to him in an attempt to increase the public pressure on them.

Mike Shirkey, the Republican majority leader in the Michigan senate, told members that he was deluged with messages after Trump tweeted his personal telephone number. “All I remember is receiving just shy of 4,000 text messages over a short period of time calling to take action,” he said.

“[They were saying] ‘We hear that the Trump folks are calling and asking for changes in the electors and you guys can do this.’ Well, you know, they were believing things that were untrue,” he added.