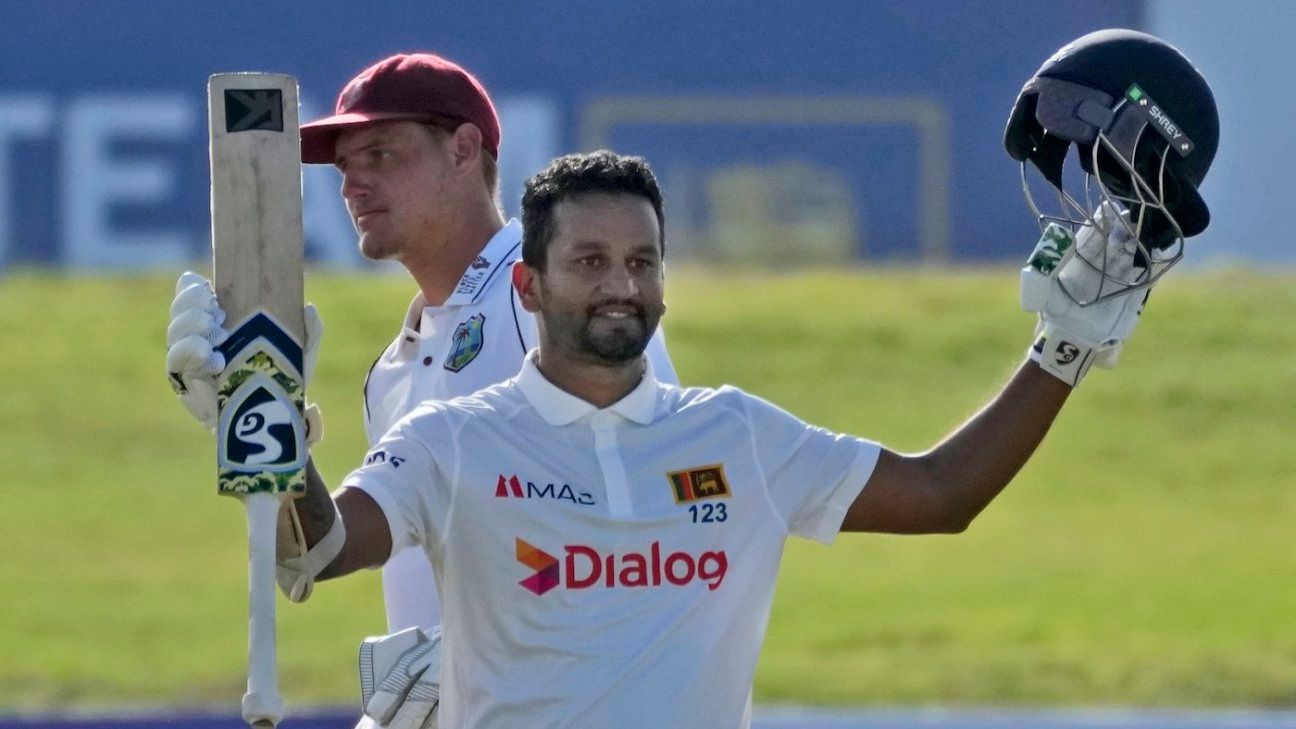 He has scored 854 Test runs at an average of 77.63 in 2021, but as good as he has been this year, Dimuth Karunaratne has bigger goals in mind. Of Sri Lanka’s Test batters, only Kumar Sangakkara and Mahela Jayawardene have hit more than 10,000 runs. Karunaratne only has 5406 in the bank at present, but wants to be Sri Lanka’s first opener with a five-figure tally to his name.

“Scoring 10,000 runs is my main target. I don’t know if I’ll be able to achieve that, but that’s what I’ve got in my mind,” Karunaratne said after hitting 147 and 83 in Sri Lanka’s 187-run victory over West Indies in Galle. “If I can continue this form, I’ll be able to get close to 10,000 runs. I like to improve as much as I can, and whenever I finish a match, I’ll go and check where I am on the Sri Lanka run charts, to figure out how many I need to score to pass someone.”

Karunaratne is within touching distance of three of Sri Lanka’s best ever batters, in Thilan Samaraweera (5462 runs), Tillakaratne Dilshan (5492), and Marvan Atapattu (5502). Although he is already 33, what is encouraging about his record is that since 2018, he averages 47.97, when he had averaged 37.08 before that.

His outstanding run tally in this match had come despite a long layoff from top-flight cricket – Sri Lanka having played their previous Test in early May (Karunaratne is no longer picked for ODIs). And although there was a domestic 50-over competition scheduled for October and November, many of those matches were washed out by the north-east monsoon, and in the games Karunaratne did play, he made only 17, 7 and, 18.

“I was quite worried before the Test because I hadn’t been able to train. I started training in October, and we were mainly doing fitness work. There weren’t a lot of skill sessions – only about five or six because of the rain. The weather didn’t give us a chance to play many domestic matches either, and even in the games I did play, I didn’t make a lot of runs. From the day I came here to Galle I worked really hard, but there was definitely a doubt as to whether I can score runs.

“With my calibre, I think if I get a start I can convert it into a big score. There was a nervous start in the first innings, but eventually I came into rhythm and that carried through into the second innings. I still think I haven’t reached my peak form though.”

Having now hit six consecutive 50-plus scores in Tests, Karunaratne is one shy of equalling the world record for such a streak. He has also struck four centuries since January.

“I think it’s a lot to do with experience,” he said of his consistency. ” When it comes to conditions, I know now when there’s going to be a lot of turn, or when there will be a little less. I’m sharing that information with the youngsters as well.

“And knowing that I had scored a lot of runs earlier in the year, there was less of a fear of failure also.”