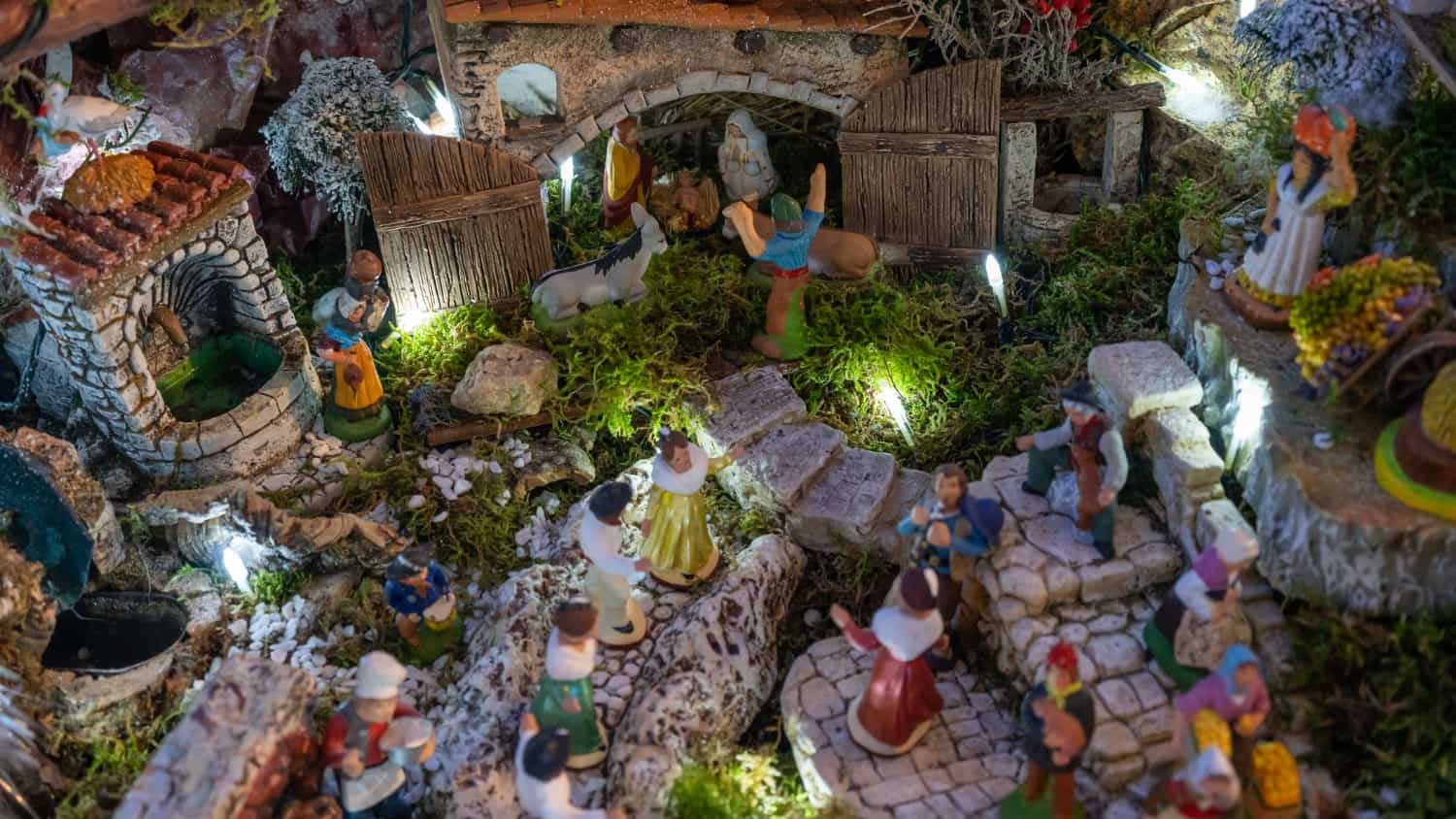 In southern Provence, especially this time of year, you might run across these itsy-bitsy figurines, and you might not know what they are. Upon questioning the store/market owner, you are told they are Santons. Well, you still don’t know what they are so let’s try to find out and get a better understanding of these colorful figurines.

Asanton, or santous, or santouos, or “little saints” are petit hand-painted figurines made out of terracotta (clay) from Marseille or Aubagne in the Provence region of Southeastern France.

Some believe that the original santons arose from the first living nativity scene said to be created in 1223 by St Francis. For sure we do know that the santons of today were created by the French people during the French Revolution in the 18th century as a counterrevolutionary movement.

During the beginning of the French revolutuion, the government closed down all churches and banned the display of nativity scenes in homes. Consequently, in privacy, commoners started making their own small figurines out of anything they had at hand – cloth pieces, paper mache and even dried bread. At great risk, these dedicated people still continued to display their beloved santons in their homes.

In Marseille, Jean-Louis Lagnel started his own kind of revolution in 1797 by molding small figures out of clay. Lagnel’s goal was to make the santons affordable for the ordinary person. By using clay instead of wood carvings, Lagnel was able to keep the price down. Unfortunately, Lagnel’s santons were not fired as the santons are today and broke easily.

Everyday life has always been represented in a santon set. You will find traditional colorful tradesmen and women represented in their work skills in their villages. Bakers, tailors, milkmaids, gardeners, vegetable sellers, chestnut sellers, candlestick makers and children are all common figures.

Animals such as dogs, ducks, cows, geese, sheep, donkeys, cats and chickens just to mention a few appear everywhere. Structural buildings, barns, bridges or anything that might be needed to form a village will also be displayed.

To begin with, the making of a santon is indeed a labor of love and patience. An artist, called a “Santonnier” will go to great trouble to bring his newly made figure to life. It is not uncommon to find them spending hours searching for twigs or plants to glue to their creations.

Once the just right “accessory” is found, he will “santonnifie” the santon, in other words, bring the santon to life. Many Santonniers work in family business, passing the trade down from generation to generation.

The Santonnier starts his creation by carving the original figure from clay. Once carved, a two-piece plaster cast is made and several more figures are made although never mass produced. Later, the drying process is finished in a kiln and the hand painting process begins.

The traditional bright colors of Provence are always present – yellow, green, red and blue. Santons will come in many sizes but mostly between two to 15 cm in height.

I found my prized set at a flea marketin a Provencal town called L’Isle-sur-la-Sorgue. Also, during the months of November and December in southern France, there are several holiday regional fairs and exhibitions selling santons, and of course in Aix-en-Provence and Marseille, where they originated.

Marseille even holds a Santon festival, which has been going on since 1803. It’s called the “Foire aux Santons (Santon Fair). Of course, you will also find retail stores specializing in nothing but santons.

Do you have a prized santon set? If so, where did you get yours? What does your set depict?