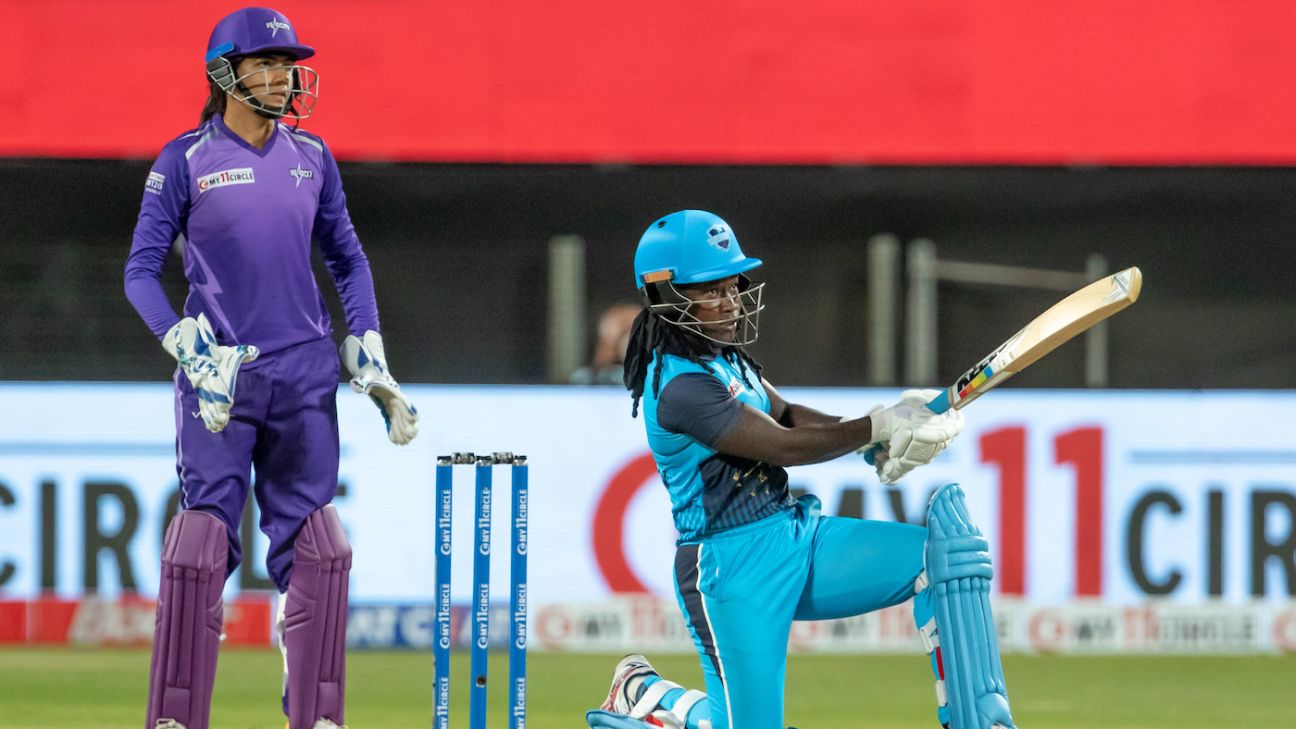 It’s no secret that Deandra Dottin can turn a match on its head single-handedly. And that’s usually the outcome if she clicks in just one department.

But there are days when Dottin metamorphoses into a three-dimensional force of nature. What hope might the opposition have in such contests, then? Ask Velocity, whose pursuit of a maiden Women’s T20 Challenge title was thwarted by the West Indies allrounder’s chief-destroyer act for Supernovas in the final at Pune’s MCA Stadium on Saturday.

All that was missing from Dottin’s phenomenal day at the office was a blinder or two to add to her electric ground fielding and match-winning returns of 62 off 44 and 2 for 28. In her best performance yet across two successive seasons and as many appearances in the final, Dottin World-Bossed her way through the ebbs and flows of a box-office encounter that ended in Supernovas clinching a four-run win in a humdinger of a finish.

The numbers alone don’t entirely tell just how wily Dottin, named Player of the Match and the Series, was on the night. In the face of tight bowling from seamers Kate Cross and Ayabonga Khaka and offspinner Deepti Sharma in the powerplay, Dottin traded run-scoring pace for circumspection at the start of her innings. The result: she scored just 16 off her first 15 balls, with a solitary four, a let-off by Sneh Rana on 13, and a close shave against a DRS umpire’s call to her name.

Rana’s introduction in the sixth over flicked the switch for Dottin. Two imperious sixes came off the first two balls as she found in the arc between deep midwicket and cow corner her backyard. It helped that Velocity themselves put on a brand of fielding and bowling through that phase that was more the backyard-cricket level than anything else.

With Dottin receiving another lifeline on 32 and feasting on free hits off overstepping errors, it was only a matter of time before she made them pay with her first fifty of this edition. She reached the milestone off 33 balls with a disdainful six over the cow-corner fence off left-arm spinner Radha Yadav.

“The game plan was to spend as much time on the crease as possible and survive the first six overs,” Dottin said after her innings, having added 73 with fellow opener Priya Punia and 58 with first-drop Harmanpreet Kaur. “Having a slow start is not always bad. You can’t always have a fast start all the time. The plan was to continue to stay and target bowlers from the end where the wind was strong.”

“Yeah, it’s true (that luck gave Supernovas free hits), but I wanted to cash in on one,” she said.

“To be honest, it’s fun batting with Punia. We enjoy batting together. We talk a lot and give each other encouragement after each ball and each over… It was always really nice to watch Harman hit from the non-striker’s end.”

With the ball, too, Dottin was a quick thinker. Bowling at a good pace – an element of her all-round game that flagged following a career-threatening shoulder surgery that pushed her to the brink of contemplating retirement in 2019 – she executed what seemed well-drawn up and batter-specific ploys.

Against two of the most destructive batters in the Velocity line-up, Shafali Verma and the uncapped Kiran Navgire, she unleashed a barrage of back-of-a-length deliveries and skiddy bouncers. Cramming Shafali for room was an inswinger to have her caught behind in the third over, thanks in part also to a superb diving take by wicketkeeper Taniya Bhatia.

Two legal deliveries later, she pinged Navgire, fresh off a resounding 34-ball 69 a night ago, on the helmet. Visibly rattled, though medically unaffected by the rammer, Navgire played out 12 dot balls, 11 of those against Dottin alone, before being bowled by Sophie Ecclestone for a duck.

Sprinkling her end-overs spell with a few surprise short deliveries also proved the perfect stratagem. No. 9 Cross, swinging wildly for her seven-ball 13 in a bid to decisively swing the momentum Velocity’s way, edged Dottin behind, unable to negotiate the pace or the spite in the delivery.

“She’s an incredible cricketer, an incredible T20 player,” South Africa batter Laura Wolvaardt, whose 40-ball unbeaten 65 nearly got Velocity over the line in their chase of 166, said. “She’s so powerful with the bat, and then she bowls as well, and bowls really well.

“I think she bowled really well today, especially upfront. She had a lot of change-ups and variations and was bowling bouncers and yorkers, so it was hard to predict what she was doing.

“And she had a couple of different fields as well, which we don’t really see too often. So, I think it’s great the way that she plays her game and goes about it and when she is in form, like she is now, she’s very destructive.”

At the presentation ceremony, Dottin described herself as a shy person by nature, an antithesis to her style of play and the self-adopted moniker, “World Boss”. As the heady Saturday night drew to a close, and the cheers of a raucous 8621-strong Pune crowd quieted, Dottin trudged along the boundary barricade near the Supernovas dugout, autographed her cap and handed it to a teen female cricketer in flannels waiting on the other side.

On a night when she shattered the opposition’s dreams, giving wings to a young fan’s might have been the most Dottin way to cap it.