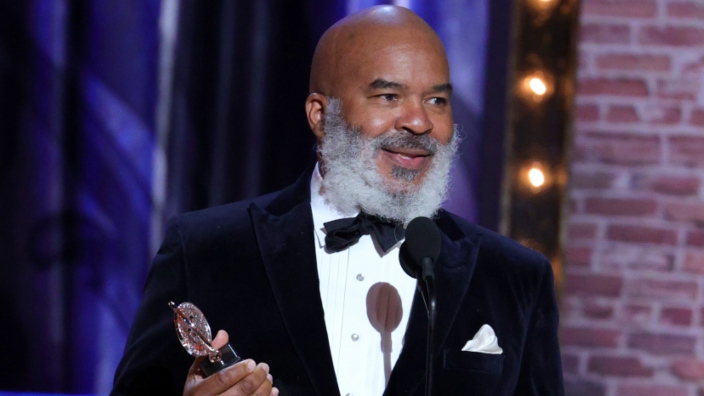 Veteran screen and stage star David Alan Grier won a Tony Award for Best Performance by a Featured Actor in a Play Sunday night for his turn as Tech Sergeant Vernon C. Waters in A Soldier’s Play.

Charles Fuller‘s drama won a Pulitzer Prize in 1982 before being adapted into an award-winning 1984 film, A Soldier’s Story — in which Grier played a smaller role, as Corporal Cobb, alongside a cast that included Howard E. Rollins Jr., Adolph Ceasar and Denzel Washington.

The murder of Grier’s character on Broadway, Sergeant Waters, kicks off an investigation that dives deep into race and tension in what Variety has called “a knock-your-socks-off drama.” A Soldier’s Play also stars Blair Underwood, who was also nominated for a Tony Sunday night.

In his acceptance speech, Grier fought back tears as he thanked Douglas Turner-Ward, an acclaimed playwright, actor, director and theatrical producer, who came to see the show before its Broadway run and before his passing earlier this year.

“This man’s passion, his commitment, every word he uttered,” Grier said of Turner-Ward, “was teaching and science of theater.”

He also thanked the Roundabout Theater, which was the play’s home, as well as its director, Kenny Leon. “I don’t know if I was the first call or the last call (for casting in the role), but I’m just glad you called, baby!” he exclaimed.

The Yale-trained Grier also shouted out Audra McDonald, a six-time Tony Award winner and one of the show’s hosts, saying, “I finally got one.”

Grier is a beloved actor and comedian who may be best known for his time on the legendary early-’90s sketch comedy show, In Living Color, however, he has been featured in dozens of films and more than 50 television shows. He also played Joe Carmichael on the short-lived Carmichael Show. Known for his comedic acting, Grier’s turn in A Soldier’s Play is a rare dramatic character, played to apparent accolades.

In her introductory remarks at the start of the Tony Awards, McDonald proclaimed, “You can’t stop the beat of Broadway, the heart of New York City. I’ve always thought of the Tonys as Broadway’s prom, but tonight, it feels like a homecoming.”

On Twitter, Grier posted a picture with the award, writing, “I can’t believe this sh*t! I fu**ing won a Tony!”

A Soldier’s Play also won the Tony Award for Best Revival of a Play at Sunday night’s ceremony.