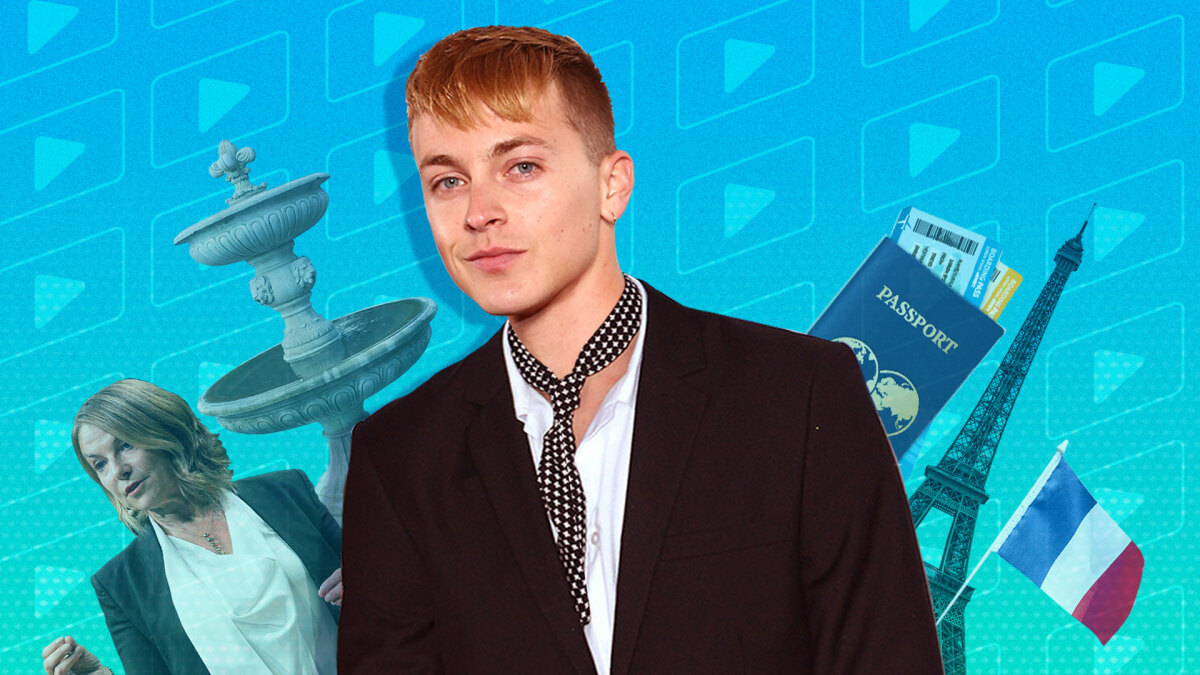 Damon Dominique is in his solo era. For the last nine years, the 30-year-old American polyglot has made travel more aspirational, affordable, and accessible — first, as one-half of YouTuber duo Damon and Jo, and now as a Paris-based multi-hyphenate expanding his reach as one of the internet’s most relatable travel and culture vloggers.

Among other endeavors, Dominique has pitched and filmed a TV pilot, is writing a book, and launched a wildly successful, delightful quirky French course, “The French I Wish I Had Learned in French Class,” with online platform Teachables. Students say he is way easier to learn from than their professors. “They go to class, and then watch my videos to be like, ‘Alright, how do I actually do this?'” Dominique laughs, “People want to learn from real people who’ve done it, that they can relate to and see themselves in. Whether it’s me traveling the world, speaking French, or drinking red wine with my friends, I think people see that and think ‘If he can do it, I can do it.’ And that’s pretty motivational.”

“Education is coming from creators,” he observes. “The only subscription I pay for is YouTube Premium,” Forget Netflix and Prime, “you can learn everything you’ve ever wanted to on YouTube, and I’m in digital school all day long. My watch history is all over the place: real estate investments, psychotherapy, philosophy reviews and lectures. I like going to the gym and just having somebody’s, like, crypto analysis in my ear. The common thread is creators with in-your-face delivery that also say articulate, smart things. They’re like, ‘You’re not helping yourself. Let me help you see it another way.'”

In his own words, Dominique digs into his internet Watch History and reveals his internet rabbit holes, hobbies, and secret obsessions with Mashable.

The business of being Victoria Paris: The Tiktokker is on her way to making millions. How did a 22-year-old learn to make that much money?

“Rethinking infidelity… a talk for anyone who has ever loved”

Esther Perel is all about relationships. She lives in New York, but she’s from Belgium and has a French accent. I think that living in a different country gives her more of a well-rounded view. I’ve watched all of her lectures and TED Talks and every single episode of her couples therapy podcast Where Should We Begin? I like listening to therapists in general, reading their books, and hearing about their clients. It’s gotten to the point for me where when I try to watch the Netflix dating shows, I’m like, “Get some emotional intelligence!” I wish emotional intelligence were taught in traditional education just as much as, say, calculus.

I love this video in particular because all of our first reactions to infidelity is to question, “How could you ever betray our trust?” Like everything’s about you! I like grappling with these harsh truths that we don’t question or ask ourselves. Like shit, maybe I did kind of push that person away! Maybe they aren’t the same person that they used to be when we were first falling in love.

You can only meet people as deeply as you’ve met yourself, so if the person you’ve offered everybody else is the person that you’ve questioned and poked and prodded and really analyzed why you think the things you do, why you behave the way you do, then it’s really like a gift. It’s a gift you can offer to other people, knowing yourself.

Alex and Leila Hormozi popped up on YouTube maybe six months ago, and I’m like their biggest fan. I’ve traveled the world and you either meet really cool people who are emotionally intelligent, or people who are business savvy. It’s very rare that you meet somebody who is both, and I think the Harmozis are both. They’ve scaled successful businesses, but they aren’t arrogant. They know their shit, they want to help people, but also take a no bullshit approach to things.

Learning to scale a business was never a goal of mine, it was more like, let me travel the world and be free and create art. But I was freaking shocked at how well my French course did, I was like, wait, I have a scalable business. Maybe I am good at this, and I’ve never really given myself a chance. My first love was always Spanish. So I’m thinking, “Well, damn, I did a French course and it did really well. What if I did a Spanish course?” And “hey, I speak Portuguese, too.” What if I do a freaking motivation course? I’m just trying to keep shocking myself.

When I found Leila and Alex, I was like, oh shit, you can be free-spirited, down to earth, a real person but still make some really good money. It inspired me to want to inspire others. They have a company called Acquisition that helps scale businesses and I’m speaking with their team. It’s happening! I’m in my Leila Hormozi phase right now, I’m growing.

I love Amber Khan. She says things others are afraid to say in her quick and charismatic New York City style. She lives in Denmark half the year, so she also has this expat angle and knows how another society functions. She’s always cussing. I just really like her delivery. I’ve listened to every single one of her podcasts and they’re all about spirituality, pop culture, how the government’s good, how the government’s bad, Euphoria, it’s everything. But she always brings in a philosophical, WTF-are-you-guys-doing angle. In each episode, she calls a group of people out, and I’ve been called out so many times.

Amber has some views that are a little out there sometimes, but I think it’s important to hear opinions like that. It forces you to continue questioning your own thoughts. I’m of the opinion that we can’t know anything for sure so to have firm beliefs about anything is like doing ourselves a disservice.

For example, right now I am learning about Buddhism, Hinduism, Islam, all of it because I don’t think we can fully commit to one school of thought or religion until we’ve learned about them all. I’m from Indiana where you’re just Christian your entire life, and the one question I always had was, “How do you know you’re Christian if you don’t know anything about the other religions?”

Anyways, this podcast is about waiting at a meeting spot, a fountain, for the right person to come into your life. It’s about letting things come to you. Amber says whenever you see a fountain, you should remember that the universe is conspiring for you.

As much as I try to figure out what works and what doesn’t, I remain shocked at what takes off. I had this thought about how using “um” in another language makes you sound more like a native speaker, so I filmed this TikTok in one take and posted it. It’s done super well. I think iIt’s a good example of everything I bring to the table: my personality, the accessibility of TikTok and social media as a teaching tool, and my ability to learn and teach others multiple languages through my experience with those languages.

I think a lot of people see my experience and see themselves in it, and that’s a better way to learn than to be stuck in a textbook all the time. I’m not a French person, but I’ve studied French. I know how the English brain works, and now I know how the French brain works. I know where you’re going to get tripped up. That’s what I bring to my Teachables course. I can point out the little things like “um,” which I’ve never heard any French teacher say, even though it’s the one word we’re saying all the time.

A YouTuber I was listening to recently said, “People want to hear from real people who’ve done the thing they’re talking about. They don’t want to hear from experts. They don’t wanna hear from, like, professional businessmen or professors anymore. And I was like, damn, that hit deep! Because that’s exactly how I’ve always run my business. I never tried to act more superior than the next person. I’m like, look, I’ve made mistakes here and there too, but here’s how you can get around them.

“What happens after everything ends?”

Philosophy is this general term that either scares people or they think is really boring. This channel does a really good job of taking lofty philosophical concepts and boiling them down into mind-bending, trippy animated stories.

This video makes you question if our reality is really a simulation, and I think it could be possible. But my question is always the same: What is the point? We’re all going through our days doing interviews, going to work, going to dinner when, honestly, the deeper questions of reality are unanswered. They all kind of go over our head, like, what are we doing here?

There’s a philosophy I heard once that essentially says it would be foolish to spend our existence as humans questioning these big ideas that we’ll never have an answer to. But even that’s kind of ignorant because it’s like, how do you know you’ll never have the answer?

I think that’s like where I’m trying to get with all of this. I don’t know if human is our natural form, or if we’re like a spirit alien somewhere else controlling it. But we’re here in this experience, and there’s so many cool things to see in the world. And I think that’s what actually keeps me going when I’m traveling. I want to maintain a curious mindset because, whether this is a simulation or not, we’re here on earth as humans. Let’s explore the human experience as much as possible. I’ll try anything once at this point.