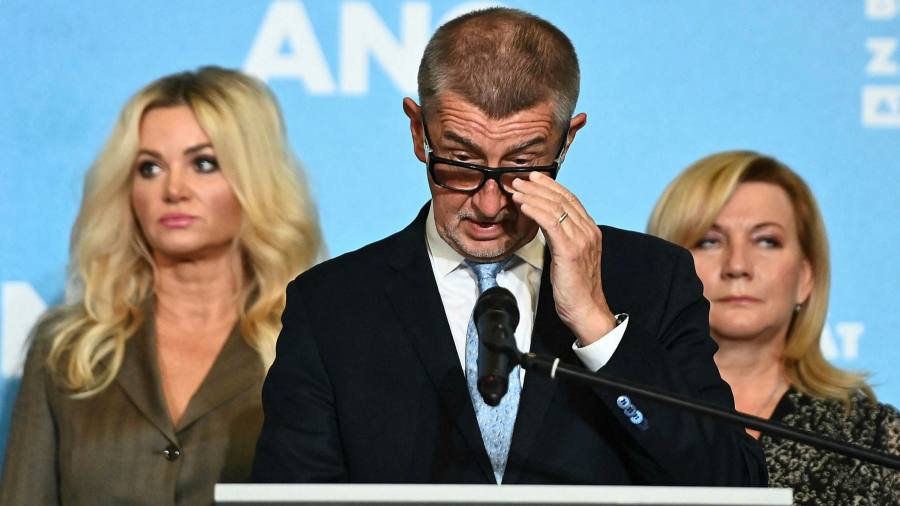 The Czech opposition won a majority of seats in Saturday’s parliamentary elections, giving them a chance to oust billionaire prime minister Andrej Babis.

With 99.9 per cent of votes counted, the rightwing Together coalition and the centrist PirStan coalition of the Pirate Party and the Mayors and Independents were on course to win 108 of the parliament’s 200 seats. Babis’s Ano was on course for 72 seats, and the far right SPD was on course for 20.

“It was a close election, but this is a huge triumph for the opposition, and in particular Together,” said Milan Nic, senior fellow at the German Council on Foreign Relations. “Tonight they got more votes than they were hoping even a few days ago.”

Petr Fiala, leader of Together, and Ivan Bartos, leader of the Pirates, both said on Saturday that their groups had a chance to form a government. But how quickly they are able to do so depends on the president, Milos Zeman.

Zeman, a close ally of Babis, said before the election that he would give the first chance to form a government to the biggest single party, even if a coalition won more votes.

If Zeman sticks to this approach, Babis’s Ano would have a chance to try to remain in power, even though the Together coalition unexpectedly won the most votes, with 27.8 per cent of the vote, putting it narrowly ahead of Ano on 27.1 per cent. But since both Together and PirStan have ruled out working with Babis, his chance of success is slim.

“There is a clear majority that would like to govern together,” said Vladimira Dvorakova, a political scientist at the University of Economics in Prague. But the process of forming a government “could be prolonged.”

Babis, a combustible billionaire who built up an empire stretching from food to fertilisers before founding Ano in 2011, came into politics pledging to use his experience to run the country like a business and pledging to fight corruption. In office, he has cut income tax and boosted state pensions, earning him the support of many older voters.

“My grandparents were in a really bad financial situation and now they are fine, so I can really see a difference,” said David, from Prague, who voted for Ano. “So I am pretty happy with what Babis actually did. Other political parties didn’t do anything in 25 years.”

However, for much of his time in power, Babis has been dogged by separate allegations of fraud and conflict of interest. He suffered a further setback this week, when the Pandora Papers leak revealed that he had used offshore companies to buy property in France before entering politics.

Babis has repeatedly denied any wrongdoing and dismissed the claims as attempts by his political opponents to undermine him.

Babis has also come under fire for allowing the state’s debt to rise sharply, albeit from a low level, and for his handling of the pandemic. More than 30,000 Czechs have died, and at one point earlier this year, the country had the highest cumulative death toll in the world in per capita terms.

“I am angry with the way Babis has run the country and . . . I believe that this is maybe almost the last chance to get rid of him,” said Martina, an IT worker from Usti nad Labem who voted for Together.

“[The handling of the pandemic] was a tragedy on all sides. Babis had four health ministers. The communication was bad. And now the campaign the for vaccination — it’s a tragedy.”

The other factor that counted against Babis was the failure of the two parties that have supported his government for the past four years, the Social Democrats and the Communists, to make it into parliament.

“There are a lot of votes that finished just below the threshold,” said Nic. “This is one of those elections that were decided at the margins.”