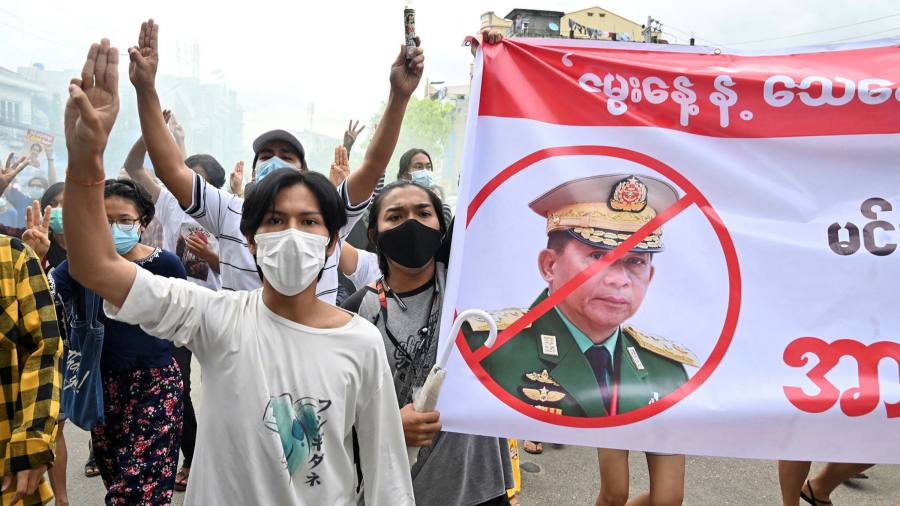 International companies are struggling to extricate themselves from military-linked investments in Myanmar following a coup in February and face the risk of reputational damage and exposure to sanctions breaches if they fail to do so. But many are finding that exiting is proving easier pledged than done.

Japanese, South Korean and Singaporean companies are among those facing the prospect of being dumped by international fund portfolios for failing to sever business links with military-controlled business partners.

But nine months after the overthrow of Aung San Suu Kyi’s government, international businesses have found few keen buyers for their local stakes and the country is suffering a deep economic slump and post-coup civil unrest.

“Exiting relationships with the Myanmar military is clearly more challenging since the attempted coup, but businesses must responsibly disengage, as this will save Myanmar people’s lives while ending complicity in the military’s atrocities,” said Yadanar Maung, a spokesperson for campaign group Justice for Myanmar.

Military forces have killed more than 1,270 people and arrested more than 10,000, according to the Assistance Association for Political Prisoners, a human rights group, and the junta is using brutal means to and crush an insurgency in north-western Myanmar.

The US, EU, UK and Canada have imposed sanctions against a number of military companies or individuals.

In the immediate aftermath of the coup, global funds sought to rid their portfolios of companies with business ventures linked to the military junta.

Companies that were in direct partnership with military companies and had long been under pressure from campaigners, such as Japanese brewer Kirin, said they would divest. Others, such as the Norwegian telecoms group Telenor, announced they would quit Myanmar because operating conditions under the junta had become unsustainable.

APG, a Dutch pension fund with $700bn under management, has lobbied Kirin and Posco, the South Korean steelmaker, to terminate joint ventures with Myanmar military-controlled conglomerates. Despite promises from both companies, APG threatened to divest if they do not make significant progress by next year.

Telenor’s efforts to exit Myanmar have been emblematic of the challenges facing foreign businesses.

The Norwegian government-backed company announced in July that it would sell its local operations to Lebanon’s M1 Group for $105m, having previously written off its entire investment in the country. But the junta-controlled telecoms ministry has soured on the deal, preferring that Telenor find a new, Myanmar-controlled buyer.

The company was already facing criticism from campaigners after being accused of failing to prevent or mitigate against potentially adverse human rights consequences from a sale to M1, a group controlled by Lebanon’s prime minister Najib Mikati and his brother.

Telenor countered that its decision to sell came after pressure by the military regime to install surveillance technology, which it said would have violated EU and Norwegian sanctions against Myanmar.

Many international companies have suspended or closed local operations but several have not, prompting campaigners and investors to question their commitments to leave the country.

Kirin and Posco, which have tie-ups with Myanmar Economic Holdings Ltd, a military-backed group, have faced some of the most intense pressure from campaign groups. They insist the companies should be ready to walk away from their investments empty-handed if they cannot divest responsibly.

“If a company cannot find a responsible buyer, they should liquidate their business and avoid making any payments to the military junta and its conglomerates,” said Yadanar Maung.

Kirin has not given a timeline for such a sale, despite its commitment to do so, and its prospective buyers will be limited by the risk of sanctions. A post-coup boycott of the company’s flagship Myanmar beer brand has further dented its appeal.

“We are taking urgent steps to implement the termination of our joint venture partnership with MEHL,” the Japanese group said. “We hope to find a way forward that will allow Kirin to continue to contribute positively to Myanmar.”

Posco has taken a different approach. A spokesperson said the company was trying to acquire MEHL’s stake in its steelmaking venture — a move designed to distance itself from military interests — while reviewing whether such a deal would breach sanctions.

“We continue to urge MEHL’s management to make a decision, but we have not yet received a response,” the company said.

But funds that own stocks such as Posco and Kirin fear such equity holdings will undermine their own responsible investing commitments.

Park said APG may soon be forced to divest as neither Kirin nor Posco had updated the fund on their progress. “I don’t think there are meaningful negotiations happening,” she said.

Against the backdrop of post-coup conflict and human rights abuses, non-government organisations have also called for greater attention to Singaporean dealings with the Myanmar military.

Foreign investment from the city-state exceeds $24bn, making the country Myanmar’s largest source of overseas financing. The US has asked Singapore to do more with its leverage over Myanmar.

Many of Singapore’s Myanmar investments are channelled via multinational and foreign companies based in the city-state.

The company told the Financial Times that its operations were in accordance with local laws but its Singapore-listed shares have been suspended since February pending regulatory reviews.

Additional reporting by Kana Inagaki and Leo Lewis in Tokyo