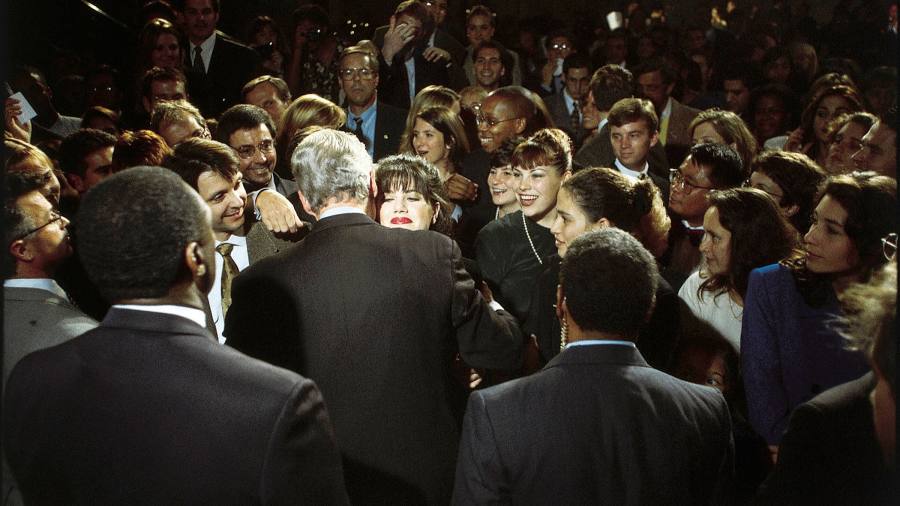 It was the first big story to break on the internet. The editors of Newsweek decided to hold off and possibly spike it. A conservative news aggregator, the Drudge Report, enthusiastically published it on what was then called the world wide web. The props instantly became part of the cultural narrative — the blue dress from Gap, the cigar, the tapes, the depositions. More than two decades later, a profane meme went viral with an illustration of Bill Clinton in stitches telling Donald Trump: “Two impeachments and no blow job?”

Impeachment, the third FX series of American Crime Story based on Jeffrey Toobin’s best-selling book, A Vast Conspiracy (1999), and co-produced by Monica Lewinsky, tells that story. Assessing from the seven episodes sent to critics — a bit like black-market vodka poured over your nervous system — the show seems to know a great deal about yearning, transgression and spiteful dispositions. Most hauntingly of all, it takes you straight back to that particular capsule in time, right on the cusp of the digital revolution.

I was still at university in 1998 when the scandal broke, living in a dorm. Even in bookish Cambridge, Massachusetts, the campus was on fire. People talked about it in the dining halls, in corridors and on cigarette breaks outside the library. In the very beginning, like everyone else, I was fascinated with the political implications of illicit sex, but then I was horrified. Not because of what had happened but because of how people reacted — the gratification in lives being dragged through the mud.

By the time I had graduated and moved to New York, it was the topic of all conversations — from David Letterman to the man behind the counter in my neighbourhood deli and my colleagues at work. Independent counsel Kenneth Starr, acting like a grand inquisitor, gave pep talks to the press while taking out the trash at his house in suburban Virginia, and we were all in it.

Imagine having your most intimate moments scrutinised by the FBI and commented on in every newspaper in the world. America’s sexually troubled president was under oath and his videotaped testimony to Starr’s grand jury was broadcast across the country. Imagine regretting everything but having nowhere to hide.

Lewinsky was legally obliged to listen through and authenticate all 20 hours of taped conversations, which Linda Tripp — the civil servant who secretly recorded her phone calls with Lewinsky — brought to the investigation. Imagine having skit after skit of Saturday Night Live made about you and the whole world laughing.

In October 2020, Jeffrey Toobin himself was brought down in a scandal of sexual misconduct when he was caught exposing himself on camera while on a Zoom call with his colleagues from the New Yorker, which cost him that job (although CNN, his other employer, only suspended him for eight months).

What are the lessons in all this? Perhaps only that humiliation is such an intensely felt emotion it can make life unbearable. Loss of dignity and reputation are excruciating experiences with devastating effects. So the message on the wall is that since invasion of privacy is punishment enough, it is better to withhold judgment.

In her 2015 TED talk, Lewinsky, trying to alert her audience to the role of empathy and the compassion deficit in online culture, said: “Imagine walking a mile in someone else’s headline.” She then joked of being the only person over 40 who would never want to be 22 again. I’m with Monica on that and so is Impeachment, which conveys how glaring the power imbalance was between an intern just out of college and the 42nd president of the United States.

The scandal nearly ended the presidency but in the end, of course, it didn’t. The stained blue dress defined the zeitgeist for women of my generation. When I ask myself if I could go on living if my most private affairs were plastered on the front page of national newspapers, the answer is yes, but this is not due to any inherent wisdom or superiority of judgment. I would not want to be 22 again because, back then, I knew so little about how to carry myself in the world.

Relishing public humiliation is an indecency in itself

The passage of time was hardly a balm to the scandal’s corroding effects, since nothing online ever goes away. And since this began a quarter of a century ago, it is a consolation to know that we now live in a very different world. Impeachment is compelling in many ways but maybe its greater strength is its subtlety in revealing what has changed since the #MeToo revolution.

Lewinsky’s story terrified me as I was leaving university because she was only two years older than me and the world’s cruel spectacle was all at her expense. But relishing public humiliation is an indecency in itself. Whoever has never made a mistake should cast the first stone.