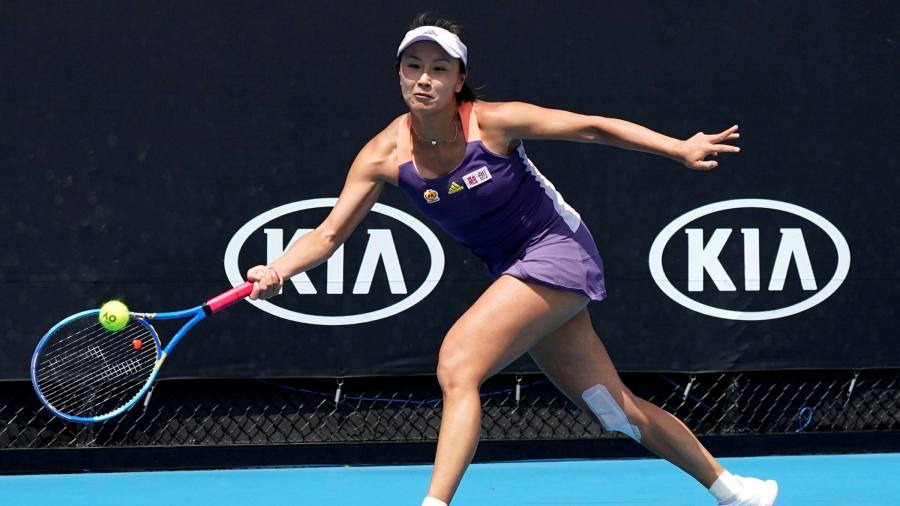 Peng had not been seen nor heard from since early November after she alleged via social media that former Chinese vice-premier Zhang Gaoli assaulted her on at least one occasion before she had a long-running affair with the powerful official.

Peng’s November 2 social media post outlining her allegations against Zhang has not been verified. The post was immediately deleted and all mentions of it by others were blocked by Chinese censors.

The case has attracted widespread attention to China’s authoritarian practices of censorship, forced disappearances and suppression of women’s rights activism.

Hu Xijin, editor of the nationalist outlet Global Times, posted a series of videos on Twitter from the Fila Kids Junior Tennis Challenger event held in Beijing on Sunday morning.

One 37-second clip showed Peng courtside alongside tennis officials. She smiled and waved after her name was introduced. Hu said the video was shot by a Global Times reporter.

Peng Shuai showed up at the opening ceremony of a teenager tennis match final in Beijing on Sunday morning. Global Times photo reporter Cui Meng captured her at scene. pic.twitter.com/7wlBcTMgGy

Hours earlier, Hu posted two other videos, claiming they showed Peng having dinner at a restaurant on Saturday with her coach and friends.

“In the past few days, she stayed in her own home freely and she didn’t want to be disturbed,” he said in a separate tweet.

Shen Shiwei, a state television employee, posted a video of Peng signing autographs at the event. He had earlier tweeted photos of the athlete surrounded by toys and claimed they were shared by her friends.

The Financial Times could not verify the authenticity of the images or videos.

Steve Simon, chief executive of the Women’s Tennis Association, said that the video from the dinner was “insufficient” to prove Peng’s safety.

“While it is positive to see her, it remains unclear if she is free and able to make decisions and take actions on her own, without coercion or external interference . . . As I have stated from the beginning, I remain concerned about Peng Shuai’s health and safety and that the allegation of sexual assault is being censored and swept under the rug,” he said.

The episode comes amid rising calls for boycotts of the Beijing Winter Olympics, due to start in February, in protest at human rights abuses in Xinjiang.

Jen Psaki, the White House press secretary, said on Friday that the US was “deeply concerned” over Peng and called for Chinese authorities to “provide independent and verifiable proof of her whereabouts and that she is safe”.

“Any report of sexual assault should be investigated and we support a woman’s ability to speak out and seek accountability, whether here or around the world,” Psaki said.

“And we know [China] has zero tolerance for criticism and a record of silencing those that speak out, and we continue to condemn those practices,” she added.

The biggest stars in professional tennis including Naomi Osaka, Serena Williams, Novak Djokovic and Roger Federer have joined the WTA in publicly supporting Peng, a former top-ranked doubles player. There have been widespread calls not only for the 35-year-old’s safety to be guaranteed but also for investigations into her claims against Zhang.

Simon, who has suggested that the association might be willing to pull events out of China, added: “I have been clear about what needs to happen and our relationship with China is at a crossroads.”

Zhang, now retired and 40 years older than Peng, joined the Chinese Communist party’s most powerful body, the Politburo Standing Committee, in 2012. Peng’s detailed accusations against a senior official are unparalleled in China and remain censored.