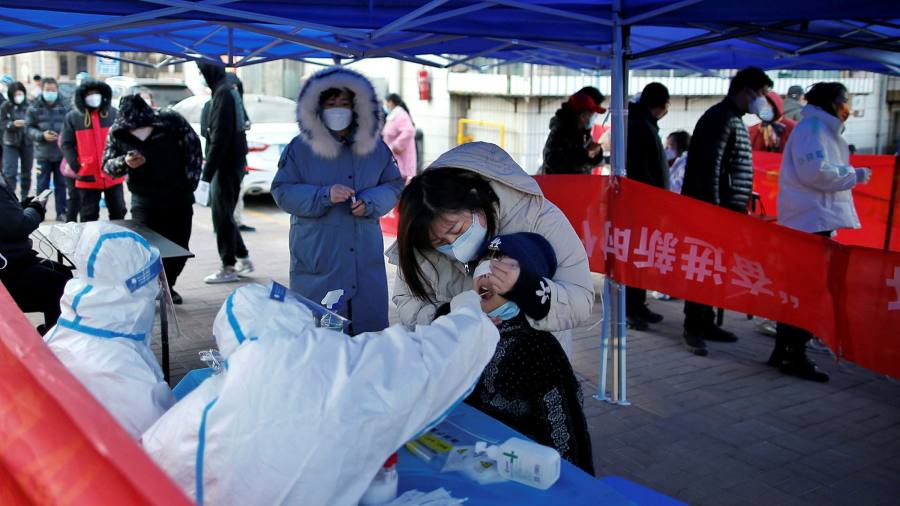 A Chinese court has sentenced three port workers to up to 57 months in prison for breaching Covid-19 containment rules, as authorities intensified efforts to stamp out the virus and companies warn about growing supply chain risks.

Three workers at a company that handles imported goods in the north-eastern port city of Dalian were sentenced to between 39 and 57 months for violating Covid containment measures, including not requiring employees to wear masks and protective clothing when handling cargo in 2020.

The lengthy prison sentences were delivered as Chinese authorities have tightened restrictions in areas hit by Omicron outbreaks in pursuit of a zero-Covid strategy.

Authorities in Tianjin, a city of 14m about 120km east of Beijing, ordered another round of compulsory testing for all residents on Wednesday after 36 symptomatic new cases were discovered, according to state news agency Xinhua.

Authorities on Tuesday placed Anyang, a city of 5m people, under lockdown after two cases of the Omicron variant were found to have spread from Tianjin.

Xi’an, a central Chinese city of 13m, has been under strict lockdown measures since last month, leading some residents to complain of food shortages.

The lockdowns have threatened to disrupt global supply chains, with companies warning of potential risks to manufacturing.

Toyota, the Japanese carmaker, said it had halted production at a facility in Tianjin until the safety of local communities and business partners was confirmed.

Samsung Electronics and Micron Technology, have previously warned that the Covid restrictions could disrupt their chipmaking operations in Xi’an.

“Given the extraordinarily high transmissibility of this variant, the risks are rising of major outbreaks across the region. Even Hong Kong and mainland China, shielded by some of the world’s toughest external quarantine measures, have seen Omicron slip through their defences,” he said.

The severe punishments in Dalian reflected China’s assertion that Covid could be spread via imported frozen goods and packaging. The claims are politically sensitive and form the basis of the government’s argument that the virus may not have originated in the country.

Additional reporting by Maiqi Ding in Beijing, Eri Sugiura in Tokyo and Edward White in Auckland