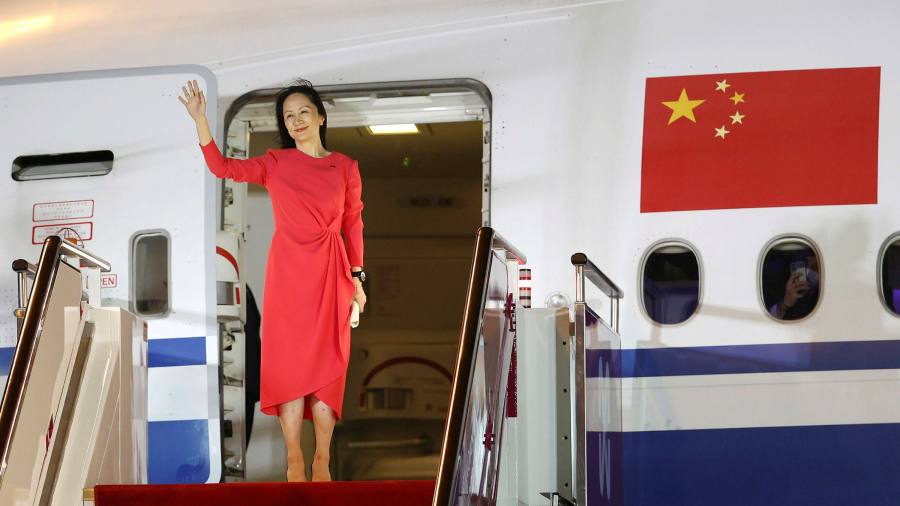 Sign up to myFT Daily Digest to be the first to know about US-China relations news.

Her release coincided with that of two Canadians, Michael Kovrig and Michael Spavor, who made a more subdued return to Canada hours after their freedom was confirmed by Prime Minister Justin Trudeau. Kovrig and Spavor had been detained in China on national security charges in apparent retaliation for Meng’s arrest in December 2018, though Chinese officials have denied any connection between the cases.

The conclusion of the long-running diplomatic impasse came after Meng agreed a deferred prosecution deal in the US over allegations of violating sanctions against Iran, and demonstrated that the geopolitical rivals were still capable of resolving difficult disputes despite the dramatic deterioration in relations in recent years.

According to people familiar with the discussions, Chinese and US diplomats agreed in July to establish a working group to discuss individual cases such as those involving Meng, Kovrig and Spavor. The people added that the agreement was the one concrete advancement to come out of otherwise tempestuous meetings between Wendy Sherman, US deputy secretary of state, and her Chinese counterparts in Tianjin.

But the nationalist propaganda blitz surrounding Meng’s return to the southern city of Shenzhen, where Huawei is headquartered, was an indication that China-US relations remain rocky, especially after Joe Biden’s announcement last week of a trilateral military pact with Australia and the UK.

After hours of official media silence on Saturday while the releases were in progress, Chinese state television broadcast Meng’s late-night return live. She was greeted by thousands of people and thanked President Xi Jinping for securing her freedom.

Hua Chunying, a Chinese foreign ministry spokesperson, condemned the US case against Meng as “political persecution against a Chinese citizen” and “an act designed to hobble Chinese high-tech companies”. Meng is Huawei’s chief financial officer and the daughter of founder Ren Zhengfei, who formerly served in the People’s Liberation Army and has insisted that the company is privately held, without state or military links.

Ned Price, US state department spokesperson, said the US called “for the immediate and unconditional release of all those whom the [People’s Republic of China] has arbitrarily detained”.

While the Biden administration would like to use the resolution of the Meng case as a springboard for more co-operative ties, Van Jackson, a former Pentagon official now at Victoria University of Wellington in New Zealand, said the move was “too small . . . when the valence of the relationship is so deeply negative”.

“Structurally, China and the US are set up as antagonists and I don’t think the administration is willing to repudiate the larger rivalry paradigm,” he said. “It’s great news, and proof that it’s possible to have co-operation within rivalry. It’s just not a game-changer.”

Jonathan Sullivan, director of the University of Nottingham’s China Policy Institute, said the episode showed that the US and the west need to realise that co-operation with China “will require compromises, probably uncomfortable ones”.

“Over the past few years, all we’ve seen is take, on both sides. And the result has been a rapid deterioration of relations, to the extent that people are already talking about a new cold war . . . I’m not arguing that China should get a free hand to do whatever it wants, but we need a defter way to manage the competitive elements,” he said.

Still, the conclusion of Meng’s case put an end to a drawn-out legal battle that had served to exacerbate fraying ties between China and the US and Canada.

“This deferred prosecution agreement will lead to the end of the ongoing extradition proceedings in Canada, which otherwise could have continued for many months, if not years,” said Mark J Lesko, acting assistant attorney-general at the US justice department’s national security division, shortly after Meng’s hearing in Brooklyn.

Though Meng pleaded not guilty and has been released, the US has cast her acknowledgment of misleading HSBC about Huawei’s relationship with Hong Kong-based company Skycom, which operated in Iran, as a win.

“Meng’s admissions confirm the crux of the government’s allegations in the prosecution of this financial fraud — that Meng and her fellow Huawei employees engaged in a concerted effort to deceive global financial institutions, the US government and the public about Huawei’s activities in Iran,” said Nicole Boeckmann, acting US attorney for the eastern district of New York.

Despite Meng striking a deal with prosecutors, US authorities do not intend to drop other charges against Huawei, signalling that Washington’s 15-year battle against the Chinese tech group — which began when it tried to enter the US market for the first time in the early 2000s — is far from over.

“Our prosecution team continues to prepare for trial against Huawei, and we look forward to proving our case against the company in court,” said Alan Kohler, assistant director at the FBI’s counter-intelligence division, after Meng’s hearing on Friday.

Huawei said it would continue to defend itself against the allegations.