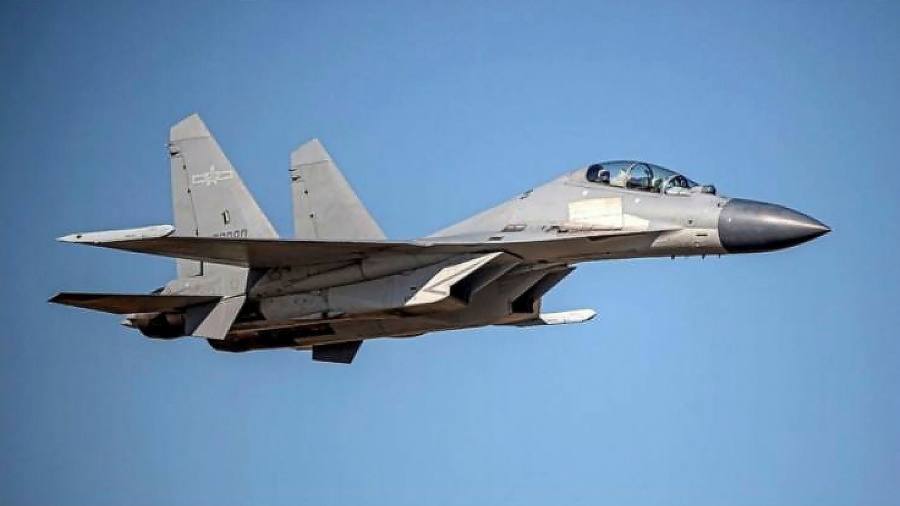 China sent a record number of warplanes into Taiwan’s air defence identification zone on Friday and Saturday ahead of a visit to Taipei by French lawmakers.

The escalation of Beijing’s intimidation against Taipei comes as China endures growing economic pressures while stepping up domestic regulatory and political crackdowns.

On Saturday, the Chinese Air Force sent 39 aircraft, including 26 J-16 fighters, 10 SU-30 fighters, two anti-aircraft planes and one early-warning aircraft, Taiwan’s defence ministry said. On both days, the numbers markedly exceed the daily record of 28 planes, which was set in June.

Military experts define the incursions as grey zone tactics, operations aimed at eroding Taiwan’s security but stopping short of war. China claims Taiwan as its territory and threatens to invade it if Taipei refuses to submit to its control indefinitely.

Last week, Beijing described Joseph Wu, the Taiwanese foreign minister as a “shrilling fly” in an unusual verbal attack that Taipei described as “slander and abuse”.

October is traditionally a politically charged season because both China and Taiwan celebrate their national days this month. On Friday, Beijing marked the establishment of the People’s Republic of China in 1949. On October 10, Taiwan celebrates the Republic of China, the state that was overthrown in mainland China by the PRC but continues to exist in Taiwan, where the ROC government fled in 1949.

Last year, however, there was no marked uptick in the People’s Liberation Army’s air incursions.

Some observers in Taiwan said the PLA’s increased harassment could be an attempt to intimidate Taiwan ahead of planned exchanges with Europe. Next week, a delegation of French lawmakers is due to visit Taipei. Later this month, Taiwan’s chief economic planner is scheduled to lead a 65-strong delegation to several central and eastern European countries.

However, military experts noted that the level of PLA air activity near Taiwan has been at a heightened level for weeks. Since Taiwan conducted its regular annual military exercise in early September, PLA air incursions frequently included fighter jets, a pattern rarely seen until now.

The PLA has been sending aircraft into Taiwan’s ADIZ on an average of 20 days per month since September 2020, when Taipei made the incursions public for the first time.

Often only one or two anti-submarine warfare or early-warning aircraft a day enter the zone for extended periods. Large numbers of fighters and bombers, like this weekend, have in the past appeared when Taiwan has enjoyed international attention or engaged in foreign exchanges.

The warplanes do not enter Taiwan’s sovereign airspace, which begins only 12 miles off the coast of its territory. But by frequently entering the ADIZ, they force Taiwan’s military to continuously scramble fighter jets, exhausting its resources and gathering intelligence in the process.