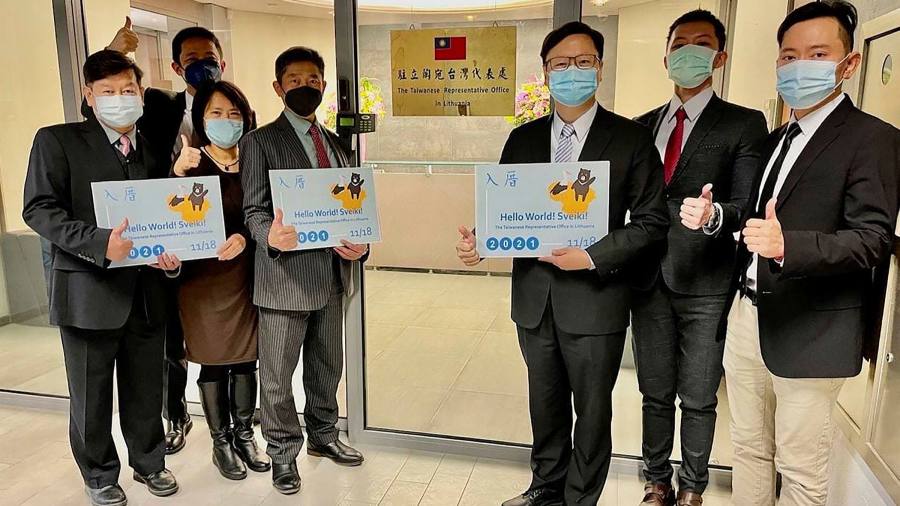 China has downgraded diplomatic relations with Lithuania after the Baltic country upgraded economic ties with Taiwan, in a sign of how EU member states risk retaliation from Beijing if they seek to deepen links with Taipei.

“This act openly creates the false impression of ‘one China, one Taiwan’ in the world, renounces the political commitment made by Lithuania in the communiqué on the establishment of diplomatic relations with the People’s Republic of China, undermines China’s sovereignty and territorial integrity, and grossly interferes in China’s internal affairs,” China’s foreign affairs ministry said on Sunday.

Beijing claims Taiwan is an inalienable part of China’s sovereign territory and regularly opposes formal engagement with the democratically elected government in Taipei.

Lithuania said it regretted Beijing’s decision and reaffirmed its commitment to the “one China policy”.

The country’s foreign ministry added that relations were based on economic interests, saying it “has the right to expand co-operation with Taiwan and to accept and establish non-diplomatic missions to ensure the practical development of such relations, as many other countries do”.

Kolas Yotaka, spokesperson for the Taiwan presidential office, rejected China’s claims. “We have every right to make friends with other countries, and no country has the right to intervene in our relationship with others,” she told the Financial Times. “We are building strong ties with Lithuania. Our friendship will continue to grow.”

Beijing’s latest reaction towards Lithuania comes amid a broader trend of warming relations between central and eastern European countries and Taiwan.

Vilnius believes it has been singled out by China even though most EU member states and western governments have similar arrangements with Taiwan.

The establishment of mutual representative offices with Taiwan had already caused a recall of the Chinese and Lithuanian ambassadors from the respective capitals.

“We urge the Lithuanian side to immediately put right its mistake and not to underestimate the Chinese people’s strong resolve, will and capability to defend national sovereignty and territorial integrity,” the Chinese foreign ministry said.

Taiwan is viewed by many security experts and officials as a dangerous flashpoint between the US and China. Beijing has ratcheted up pressure on Taiwan across diplomatic, military and economic realms since 2016 when the Democratic Progressive party led by President Tsai Ing-wen took office, replacing the more Beijing-friendly Kuomintang.

Gitanas Nauseda, Lithuania’s president, told the Financial Times in August that the Baltic state would not back down. He added that while the country was committed to defending democratic values, the approach “should not bring additional tensions”.

Vilnius has taken an increasingly assertive stand towards China in recent months. The government has pulled out of the 17+1 group established by Beijing for dealing with central and eastern European countries, condemned China’s treatment of Uyghurs in Xinjiang and banned Huawei from its telecom infrastructure.

Some governments and lawmakers are reconsidering their links with China, as they have become increasingly fearful of Beijing’s authoritarian tendencies and disillusioned over economic opportunities in the world’s second-largest economy.

A group of members of the European parliament visited Taipei this month to assert their support for Taiwan.

Separately, Australia’s defence minister said it was “inconceivable” that the country would not support the US in a campaign to defend Taiwan.

China’s foreign ministry also issued a “stern warning” to the government in Taiwan over its attempts to seek foreign support.

“No matter how ‘Taiwan independence’ forces try to misrepresent facts and confound black and white, the historical fact that the mainland and Taiwan belong to one and the same China cannot be changed,” the ministry said.

In addition, Lithuania is facing severe pressure from neighbouring Belarus, where the regime of Alexander Lukashenko has lured thousands of migrants to its border.