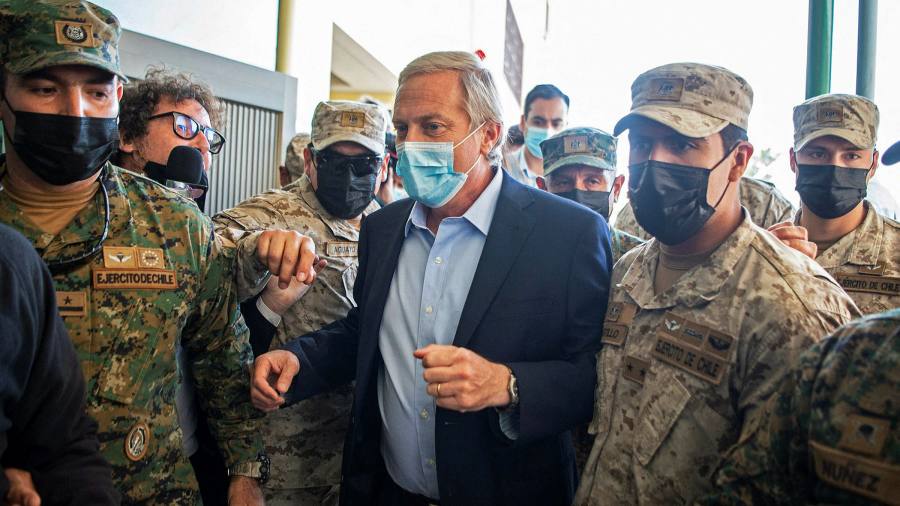 Chileans will cast their ballots on Sunday in the first general election since mass anti-government demonstrations two years ago, with voters leaning towards extremes as they reject the political establishment.

The elections, which will probably go to a run-off in December, are seen as a referendum on the Chilean economic model that has delivered some of the best growth in Latin America in recent decades but failed to share the benefits widely among the population.

“Those who are poor, die poor. The riches of our country are badly distributed,” said Carolina Cavieres, a 35-year old mother of two who was casting her vote in La Pintana, a working class suburb to the south of Santiago.

Outside the polling station, 50-year old José Peredo, who moved to La Pintana in 1983 when it was still countryside, said Chileans were disillusioned because “[the elite] want all the cake for themselves . . . they promised us equality if we became a democracy, and see what we have.” He gestured towards the lines of cramped social housing that overlooked a congested highway.

The two front runners to be Chile’s next president present starkly different visions for the country’s future.

Narrowly leading the seven hopefuls in closing polls was José Antonio Kast, a 55-year old, ultra-conservative father of nine who defends free markets and traditional values. “Chile needs peace, Chile needs order . . . I invite you this Sunday to dare yourself with me,” Kast called out to roaring crowds at his closing rally on Thursday.

Kast has spoken out against immigration, same-sex marriage and abortion. He has appealed to Chilean voters alienated by the left, promising to restore order and slash taxes under his new nationalist Republican party that he founded in 2019.

His main opponent is Gabriel Boric, a 35-year old congressman and radical former student leader. Boric has vowed to scrap the private pension system and bury the country’s “neoliberal” past of market-oriented policies that have failed to narrow social divisions. He is running as part of a broad left-wing coalition that includes the Chilean Communist party.

Boric, who would become the country’s youngest president in more than two centuries if elected, has said that the so-called “Chilean miracle” “was just for the outside world, not for us”.

The central issue is not that people are extremely poor, said Marta Lagos, a Chilean pollster and sociologist based in Santiago. “People in Chile have the basics,” when compared to other Latin American countries, she said, but they are not equally shared.

“Where is Mr Joe Average? He doesn’t exist,” Lagos said, pointing to how at least 50 per cent of the population in Chile earns less than $800 per month, below the national GDP per capita of $1,100 recorded last year by the World Bank.

“People are calling for the redistribution of wealth to change, that’s why candidates like Boric have emerged,” Lagos said.

This Sunday is the first presidential ballot since the estallido, or explosion, of anti-government demonstrations in 2019, triggered by fare increases on the Santiago metro, which quickly escalated into anger over high living costs and income inequality.

A new Congress, regional councillors and more than half of the senate is up for grabs.

With no outright presidential winner likely to be announced in the first round, the congressional vote will be key come Monday, said Claudia Heiss, head of political science at the University of Chile.

No single party holds a majority and the lower house is expected to become “even more fragmented” after Sunday, Heiss said, with as many as 13 different parties forced to negotiate to secure a majority.

“Independents further to the left and further to the right will secure more seats . . . representatives therefore will be forced to make alliances to get legislation through regardless of who is made president,” Heiss said.

Congress will need to approve a new text of the current constitution that will be put to a plebiscite in the third quarter of next year. In July, a voter-approved assembly began drafting a replacement for the current deeply divisive constitution, adopted in 1980 in the middle of General Augusto Pinochet’s regime.

The constitution favours private enterprise, which its supporters say has driven the country’s vigorous growth and lifted millions out of poverty. But for many it represents a direct link to the dictatorship, despite numerous modifications. The new assembly could weaken the president’s powers and expand the scope of the Chilean state.

Abstentions on Sunday are expected to be high. Roughly 50 per cent of the population is likely to turn out to vote, an “optimistic estimate,” said Lagos. Unlike in other Latin American countries, voting in Chile is voluntary. Low participation is driven in part by “immense” voter apathy and a “crisis of representation” within the mainstream parties, said Lagos.

Peredo from La Pintana said he had tried to convince his son over lunch to join him at the polling station. “I’ve got debts for 20 years, it takes months to see a doctor and crime is only getting worse. We have to do something.”