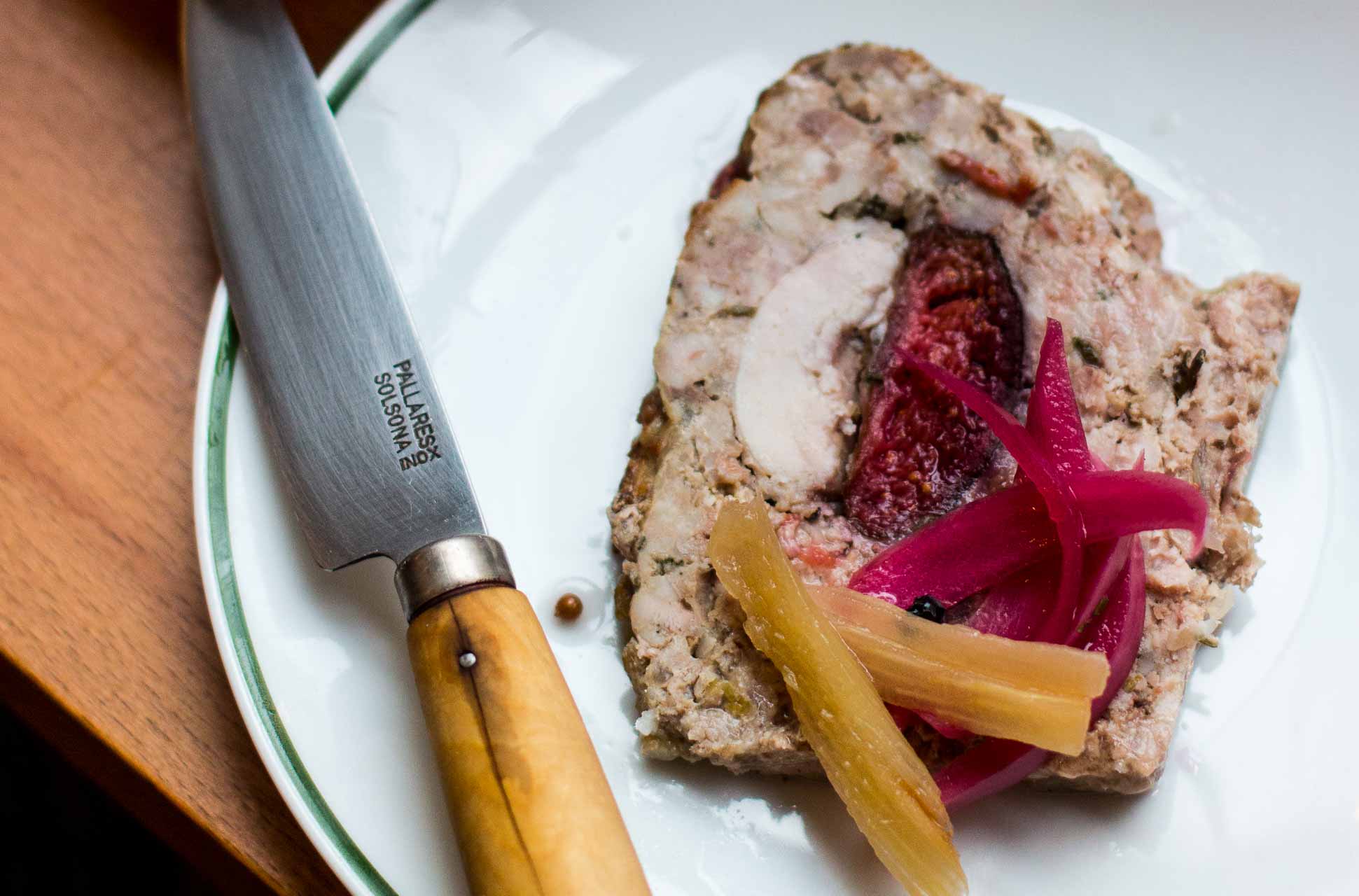 The other day, for some reason, the subject about the “decline of French cuisine” which had been much-discussed and debated about subject a decade ago, came up. At the time, books were written about it, a Time magazine cover featured a sad mime bemoaning the end of French culture, newspapers wrote articles bemoaning faltering bistros and wondering ‘‘Who could save French cuisine?’, and French television reporters rifled through the garbage of esteemed bistros and restaurants to show empty packages of pre-prepared and frozen foods that likely had been served to customers. The future of French cuisine was a subject of international interest.

People asked me to chime in on it, too. It was a rather loaded subject because there were a lot of issues surrounding any “decline,” but it was also hard to define – “What is French cuisine?” Yes, it’s Duck confit, Hachis Parmentier, œufs mayonnaise, éclairs, and Paris-Brest, but the new generation of cooks began recasting the focus of food in France, putting the quality and diversity of the ingredients first, and supporting local producers while taking cues from the various regions and cultures in France (which has always been the foundation of French cooking), rather than sticking to a codified script.

So I was excited when Chanceux opened in my neighborhood recently. I’d met Thomas Lehoux a few years ago, and featured him in Drinking French because he decided to improve the reputation of French coffee (another hotly-contested issue) and opened Belleville Brûlerie, a small-scale coffee roasting company that he founded in Paris with his business partners.

Many of these concepts – coffee roasters, bean-to-bar chocolate makers, “craft” cocktail bars, farm-to-table restaurants (which was based on the French concept of cuisine du marché, or market cooking), earth-conscious butchers, and so forth –  were taking hold in the rest of the world, and as a result, a whole new generation of bonnes adresses sprouted up in Paris.

After pioneering the now-ubiquitous wave of coffee shops around town (the list I posted in 2008 started off with less than a dozen places to find good coffee in Paris, and now is so big that I stopped updating the list), Thomas opened an épicerie, which he refers to as a delicatessen, with his personal partner, Farah Laacher, which is indeed a deli of sorts, that’s also a café, wine bar, restaurant, charcuterie, and an all-around great place to hang in…all rolled into one.

Farah spent a few years working at various restaurants and cafés in Paris, including one by the Canal St. Martin, a quartier that has exploded in popularity. The café she worked at was always packed at mealtimes, and the kitchen was miniscule, but she turned out hundreds of lunches a day, which gave her the chops to take on her own place and run her own kitchen. It’s nice to see her talent shine so brightly at Chanceux.

Everything in the shop is carefully sourced, and definitely fait maison.

As part of an initiative in France to let people know the restaurant they were dining at cooked foods from scratch, the government introduced a Fait Maison symbol a few years back to assure diners that they were getting what they thought they were. (No need to rifle around behind the restaurant for tell-tale packages…) But no one needs to worry at Chanceux and they don’t need any symbols or logos posted on the door; when I had lunch at Chanceux the other day, fresh produce teetered on my table, and the cheese and charcuterie cases listed where everything was from, and in some cases – like the cheese below – the person who made it.

If that name looks familiar, it’s because that chèvre is made by Thomas’ father Bernard, who is a farmer and makes his own goat cheese, a specialty of the region where he lives, which is available in different stages of ripeness from very fresh (soft and dewy) to disks that are sharper and more aged.

The pâtés and terrines are made in-house by Farah, and I liked that in their refrigerator case, they limited their selection to just one butter (and a great one at that!); Bellevaire raw milk salted butter with crunchy crystals of salt in it.

Right now they are open from 10am to 7pm, but that may change in the future. Lunch was busy when I went and is served from Noon to 3pm. To start off, Thomas made me an incredible mocktail, as he described it. (Another thing that’s changed in France is that people don’t habitually drink wine with lunch as they have to get back to work.) He pulled out a citrus press and began squeezing Satsuma tangerines and limes, then adding apple/quince juice as well as fait maison Makrut lime syrup to the glass. It was beautiful to behold, and so good that I finished it quickly.

While scanning the chalkboard menu, the cecina (dried beef) sandwich with onion confit, dried tomatoes and arugula sounded really good, but when I asked about the Brioche Hokkaido, both Thomas and Farah, the fellow working in the kitchen with her, all nodded vigorously that that was what I should order. So I did.

Even though Farah has sent me a slice of rabbit-fig terrine with pickled rhubarb and onions (shown at the top of the post) to taste, which was terrific, I wasn’t prepared for the copious “Brioche” that landed in front of me.

The picture I took of it doesn’t quite do it justice, so how do I say this? It was outstanding. I was surprised when I took my first mouthful and discovered the brioche wasn’t as rich or as dense as I was expecting, but was feather-light, topped with an explosion of fresh ingredients and flavors. I don’t know how she mixed so many flavors, such as roasted hokkaido (kuri) squash, pickled chiles, fresh cheese with shallots, girolles (wild mushrooms), charred leeks, buckwheat, fresh herbs, and preserved egg yolk, to work together so well, but boy, did they ever.

When I asked Farah how she got everything to taste so lively, she said that she was a big fan of seasoning with lemon and using fresh herbs (my kind of cheffe!), which is something I think more restaurants could be bolder about. Even when the food is well-prepared with good ingredients, making sure a dish has a little bit of acidity, and the right amount of salt, can be the difference between something that is just okay, and something that squarely hits the mark. Fortunately like most food shops these days in Paris, Chanceux does take-out, so I took half of the hearty lunch home. But if you go and it’s on the menu, I recommend it.

I didn’t indulge at lunch, but Chanceux does have a well-edited selection of natural wines, which is another checkbox of the younger generation of cooks and wine bar proprietors in France. Natural wines can be divisive but when I have a good one, I really like discovering the unique identity of the wine, which is more easily discernable when the wine hasn’t been over-manipulated nor is it filled with additives. When Alice Fiering told me about all the additives that can be added to wine, and Pierre Jancou published a list of them in the EU, I began to choose wine a little more carefully.

Sometimes (on their Instagram page) Thomas will announce a bottle of very special wine that he’s opened that’s available by the glass. Recently there was a Château-Chalon vin jaune, one of the most sought-after sips in the world, made in the Jura region. To make this special wine, the juice from late-harvested grapes is slowly fermented under a veil of yeast, which gives it a particular, almost sherry-like flavor. It’s nutty and unique, and even comes in a special size bottle…and it’s not inexpensive, so it’s nice to be able to get just a taste of it, which is rarely offered in restaurants.

Thomas gave me a taste of a vintage Bénédictine that I was eyeing, which had become toasty and malty and rich over the years it waited patiently in the bottle. I thought it’d be perfect with the speculoos (spice cookies) I eyed on the shelf of the épicerie.

For vintage spirits hunters, Thomas has a shelf of them on offer, which are all rarities. It’d be interesting to see how they evolved as well, like the foods and flavors coming out of the constantly emerging talents in France, too.