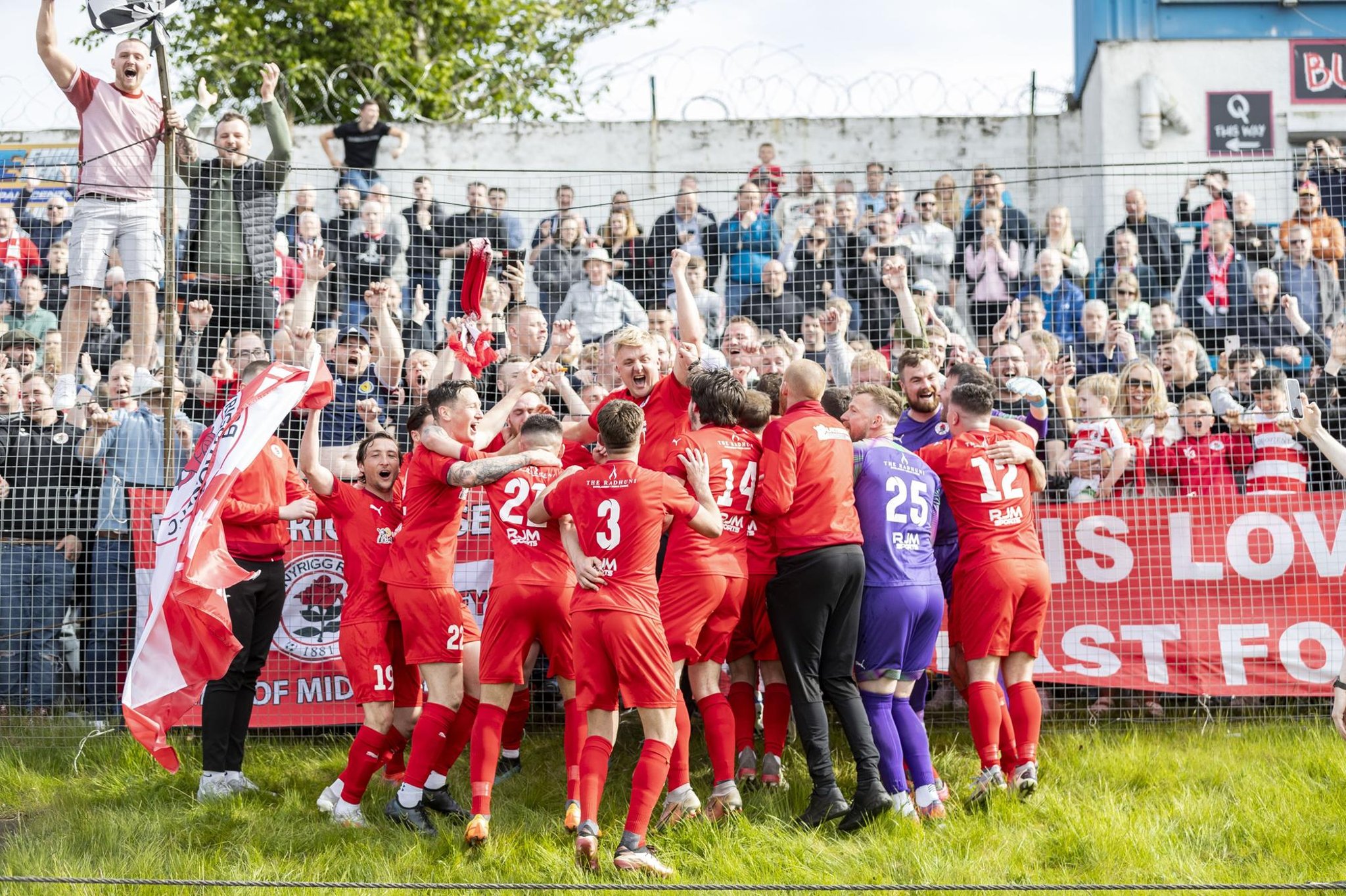 The Bonnyrigg Rose players celebrate promotion to the SPFL after overcoming Cowdenbeath.

It proved third time unlucky for Cowdenbeath, who have long flirted with falling through the trap door. A penalty shootout victory over East Kilbride and win over an eight-man Cove Rangers side saw them prevail at this stage in the recent past. But this latest assignment proved a miracle too far for a club that have been a fixture of the senior scene for well over a century.

It wasn’t so long ago that Steven Gerrard stood on the sidelines at Central Park and admired the view. Cowdenbeath have a long though perhaps not always distinguished history in the Scottish League; they have been members since 1905. They have played league football at Central Park since 1917, when they moved to a stadium some might cruelly suggest has been left untouched since.

It was still able to accommodate a very decent crowd of 2,202 on Saturday as the hosts failed to overturn an always challenging three-goal deficit from the first leg seven days earlier. Bonnyrigg Rose are a coming team. They never looked in any real danger after enjoying such a fruitful afternoon at their own New Dundas Park ground.

Neil Martynuik, the Bonnyrigg Rose left back, applied the coup de grace just after the hour mark when he slotted home a penalty. Jonathan Stewart, the visitors’ skipper, was adjudged to have been fouled by Alex Ferguson. The decision looked harsh.

It certainly didn’t brighten the mood of Cowden manager Maurice Ross. He was free to admit afterwards that the tie was already as good as over when Harvey Swann was shown a red card in the first half of the first leg after picking up a second booking for a foul on Dean Brett, the former Cowden player. A debatable penalty was given against Ross’ team shortly afterwards on the way to a ruinous 3-0 defeat.

Another soft penalty, awarded by referee David Munro, completely extinguished the home team’s slim hopes in the second leg. Stewart was loudly jeered when he was replaced with 15 minutes left.

Not that the Bonnyrigg fans cared a jot. Five supporters’ buses had left the Midlothian town earlier in the day and many others had clearly made their own way to the stadium. The Rosey Posey experienced the highs when winning the Scottish Junior Cup in 1966 and 1978. They might have another memorable day to come as soon as next weekend when they play Auchinleck Talbot in the Scottish Challenge Cup final.

But this, surely, tops the lot. It’s just a shame Sean Connery, perhaps their most famous former player, is not still around to toast them with a martini cocktail.

But what of Cowdenbeath? The struggle is real. Donald Findlay, the colourful chairman who will shortly celebrate 12 years at the helm, surveyed the scene pre-match, as if drinking it all in for the last time. Even Findlay, a top QC, would struggle to concoct an argument to persuade anyone that Cowdenbeath do not deserve to be sent down. They are persistent offenders.

As Ross later said: “It is not by mistake this has happened. Year after year we have found ourselves in the same situation. You have to change what you are doing. If you don’t change, the inevitable happens.”

Ross signed an 18-month contract in November. “I have come to what is probably the most impossible job in Scottish football and we made it better but it was not good enough in the end,” he said. Before Bonnyrigg, Cowdenbeath had lost only once in seven games. Ross expects to be given the chance to bring them back up from the Lowland League.

The hosts had their moments. Bobby Barr hit the post early on with a shot from the edge of the box and the real “what if?” moment arrived nine minutes before half-time, when Sam Denham clipped the bar from about four yards as he tried to divert a cross into the net. A few inches lower and who knows?

“I kent it was coming just not this season,” said Jimmy Brown, a fan since the 1970s, as he left the stadium. “You just got the feeling. Another second bottom finish last season to a poor Brechin side. I think the blame has to lie at the door of the signings made last summer by Gary Bollan.

“I have seen Bonnyrigg a couple of times on my travels this season and I was not impressed. We were in a bit of form and I think we are actually better than the Cowden sides from the previous play-offs which managed to win v East Kilbride and Cove Rangers, who are both better than Bonnyrigg – in my opinion.”

As for the team’s prospects in the Lowland League next season, he said: “It’s an abyss, isn’t it? You either do it first time next season or you are stuffed.”

He will continue attending Central Park whatever happens – except when the Colts teams from Rangers and Celtic are in town. He will draw the line at that. “I don’t agree with them being in the league at all,” he said.

Could it possibly be the trigger for a rebirth? “Maybe it would be beneficial if we went down again,” he argued. He reasoned that clubs in the East of Scotland League such as Tranent Juniors and Penicuik Athletic would bring more fans than the likes of Caledonian Braves and the university teams from Stirling and Edinburgh.

A non-drinker, he didn’t even have the option of drowning his sorrows. “I’ll just go home and do the weeding,” he said.

In the background as he spoke could be heard the revving of engines. Just as time waits for no man, the same applies to stock car racing. The Saturday night meet was scheduled for 6pm, as normal.

Few in the petrolhead community seemed interested in extending any sympathy to those few local football fans still milling around in something of a daze after what, in Scottish football terms, had proved such a significant afternoon. It was a noisy reminder that life will go on.