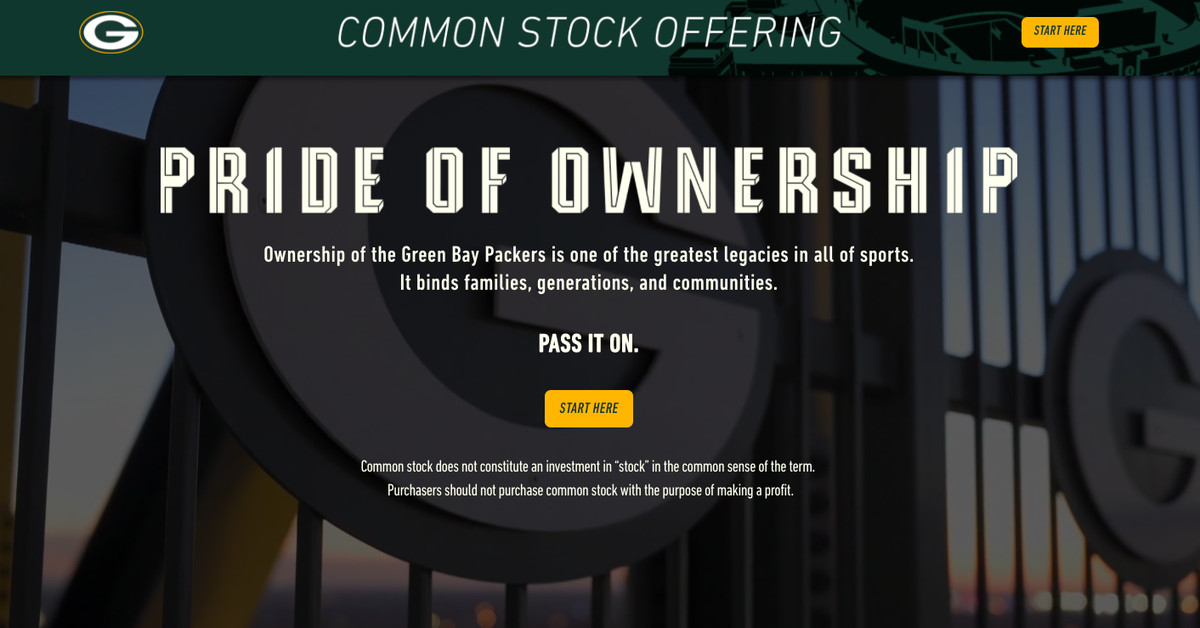 It’s a huge day if you like giving away money to a billion dollar organization and getting nothing in return. That’s right folks, your chance to become an “owner” of the Green Bay Packers is here!

On Tuesday the Packers opened up shares of their “common stock” for the first time in 10 years. It gives anyone the chance to say they’re part owner of an NFL team for the low, low price of $300. Alternatively, you could just lie about it and tell people you part own an NFL team, because you’re pretty much getting the same thing out of it.

So, what does that $300 get you? What can you expect as a part owner of one of the proudest teams in NFL history? Nothing at all! It doesn’t matter if NFL profits soar, or if the Packers become the most valuable sports franchise in the world — the team is very quick to tell you that you won’t make anything. Heck, it’s right there on the landing page.

So, by the Packers own admission, the “stock” isn’t stock. The only way you can call it stock is if you ignore the common sense meaning of the term stock. Get it? Dig a little further in and they make it clear that you can’t sell, trade, or transfer your stock to anyone — except an immediate family member in the event of a death. So, once again, not a stock.

Surely you must get some really sweet deals for being a shareholder, right? Hell no you don’t! Do you think this is some sort of utopian co-op? That’s commie trash. You don’t get tickets, don’t get the rights to any preferential seating, you don’t get a say on any hirings or the football direction of the team.

You DO however get the right to vote on who makes up the board, from a pre-approved list of people sent to shareholders. Also a certificate, because who doesn’t like a good certificate? Also, there’s a $35 additional handling fee for the certificate. You didn’t think your $300 investment would actually get you the certificate, right?

Maybe you really like the idea of voting on who makes up the board. It makes you feel in power. Well, it sure as shit shouldn’t, because there are 501,000 shares currently owned, with another 300,000 being made in this offering. So, your $300 will give you the voting power of 0.000125 percent — and you can keep getting diluted forever, because the available float the Packers can change whenever they feel like it, wee!

Don’t get too discouraged though. If you decide voting and keeping up with the Packers is just too much, you can always just ignore their messages and not vote. Then after five years the team can revoke your share and pay you the handsome sum of $0.025. Who knows what two cents will look like in the future? That’s fun to imagine, right?!

The new float will raise $90 million for the Packers, with plans to make further renovations to the stadium. In the 2011 float the funds were used to make improvements to Lambeau Field as well, presumably without raising ticket prices. Joke’s on you for believing that, because despite getting fans to pay for stadium improvements by calling them “owners” the team still took taxpayer money, and will keep taking it until 2031!

As for ticket prices, surely raising all this money multiple times in team history was a brilliant way to pay it forward. A wonderful world where those who could afford shares offset the cost of rising ticket prices for families. That had to have happened, right? Hell no! Ticket prices have soared over the last decade, and now the Packers have the fourth most expensive tickets in the entire NFL!

So don’t miss your opportunity today to become an owner of the Green Bay Packers. The only investment I can think of worse than spending $300 on a share of the Packers, is spending $250 on this vintage 1992 Flowbee, which was a vacuum that cuts your hair. Actually, scratch that, the Flowbee will save you money on haircuts with every single use. A couple of years and it pays for itself. The Packers stock will never pay for itself, you just get to brag about being one of 800,000 other rubes. But at least you get a cool certificate.