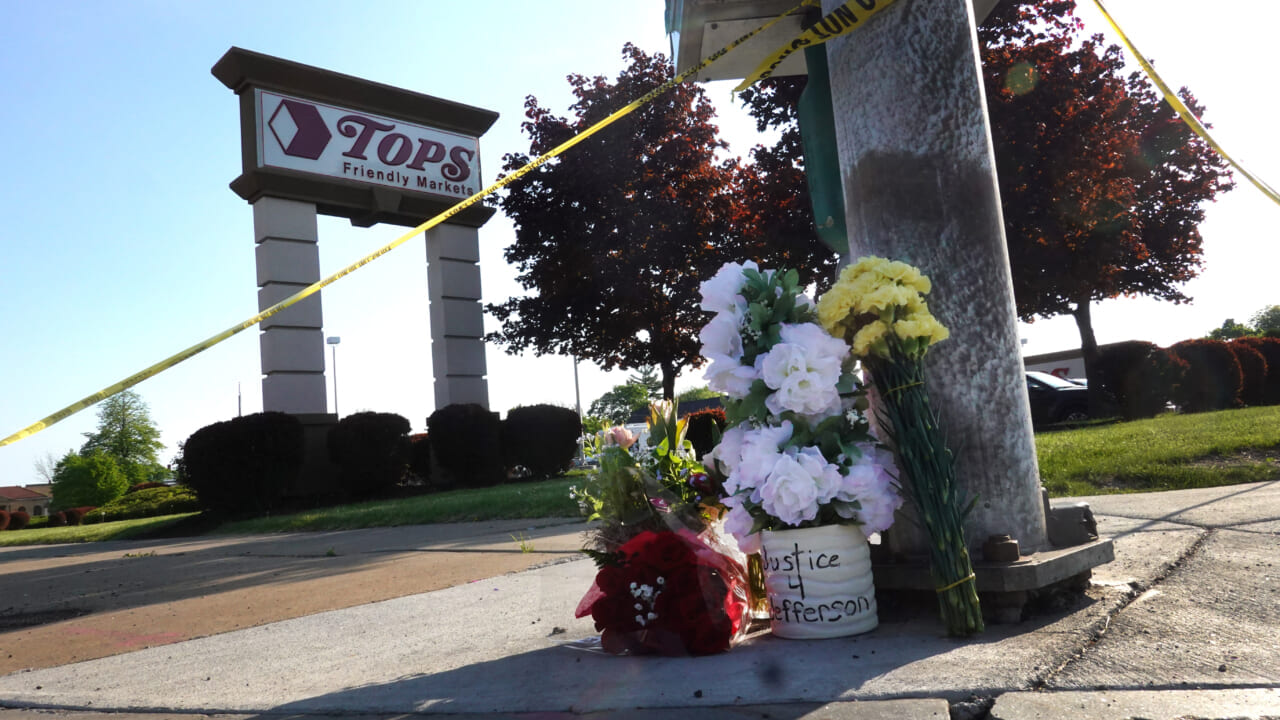 Flowers are left at a makeshift memorial outside of Tops market on May 15, 2022 in Buffalo, New York. On Saturday, a gunman opened fire at the store, killing 10 people and wounding another three. (Photo by Scott Olson/Getty Images)

There is a sentence fragment embedded in my memory that historian Ron Chernow once used to describe the terrorist attack on June 30, 1866 at the Mechanics’ Institute in New Orleans. Overtaken by what could only be described as “hating,” a racist mob of white citizens surrounded the building filled with a group of Black voters so elated with their newly gained right to vote that they danced their way to Louisiana’s constitutional convention and…

Chernow will take it from here:

The whites stomped, kicked, and clubbed the black marchers mercilessly. Policemen smashed the institute’s windows and fired into it indiscriminately until the floor grew slick with blood. They emptied their revolvers on the convention delegates, who desperately sought to escape. Some leaped from windows and were shot dead when they landed. Those lying wounded on the ground were stabbed repeatedly, their skulls bashed in with brickbats. The sadism was so wanton that men who kneeled and prayed for mercy were killed instantly, while dead bodies were stabbed and mutilated.

“…until the floor grew slick with blood.”

For me, those seven words capture the essence of America’s bloodstained soil more accurately than all the purple mountains’ majesty and amber waves of grain combined. The phrase serves as an enduring metaphor for white America’s rapacious dedication to preserving power. Although it is convenient to believe that this current racial backlash is an outlier, American history is pockmarked with racial violence sparked by the fear of whiteness becoming extinct. Yet, even the most well-meaning Americans have embraced the dangerously naive narrative that Trump, Fox News and the MAGA minions that they serve have unleashed a new wave of racism across the country.

This phenomenon is not new.

Eight years before a reported white domestic terrorist killed at least 10 people in a Buffalo, N.Y., supermarket; two years before a majority of America’s white electorate selected a white supremacist as commander-in-chief; long before Tucker Carlson had a show on Fox News, back when podcasts were barely a blip on the digital media landscape, I interviewed a white supremacist named Shawn. As a devotee of the “white empowerment” movement, Shawn introduced me to a rapidly growing conspiracy theory now known as “the great replacement theory.”

“We are being disenfranchised, and it is very much a genocide,” he explained. It’s not because I hate other races. I just wanna preserve my own. It’s because what’s happening right now is an existential threat to my people. And one that needs to be confronted.”

It is easy to understand why many people believe that white supremacy is trending upward. Because of social media, the availability of information on the internet and police data, the news of white extremism is more likely to reach the average American. Even the Bureau of Justice Statistics’ 2021 report notes that from 2010 to 2019, the number of hate crimes incidents recorded by law enforcement rose by 10 percent. However, a closer look at the data shows that the reported rise and decline in hate crimes is due to the number of law enforcement agencies participating in the FBI’s hate crime reporting program.

Year in and year out, about 6 in 10 hate crimes in America are motivated by race or ethnicity—most because of anti-Black sentiment. And, as the FBI notes, over the past decade, “the number of hate crime incidents motivated by race, ethnicity, or ancestry bias was stable,” while, at its lowest point, the number of victims decreased by about 3 percent. According to records maintained by the NAACP, about 55 Americans were lynched each year between 1882 and 1968. In 2021, 51 Americans were killed in hate crime incidents.

The floor is still slick with blood.

In a sense, the “great replacement theory” is just a new name for the white majority’s longstanding fear that their power and authority will eventually be usurped by a non-white majority. The “great replacement theory” alluded to by Donald Trump, Tucker Carlson and the mass-murdering terrorist in Buffalo has sparked domestic extremist violence from church bombers in Birmingham, Ala., to insurrectionists in the Capitol rotunda. In his 1963 inauguration speech, Alabama Governor George Wallace defended his segregationist beliefs by citing the plot to “persecute the international white minority to the whim of the international colored majority.” Dylann Roof lamented about “people pretending like they have something to be proud of while white people are being murdered daily in the streets.” The day after the Mechanics’ Institute Massacre, the front page of the New Orleans Times-Picayune said: “If there was any question as to who constitutes the dominant population of Louisiana, we think it is now settled.”

The danger in painting racial terrorism as an uncommon occurrence is that it makes people less vigilant about pursuing the people who perpetuate racial terrorism. Elon Musk’s willingness to sweep Trump’s tweets that incited violence under the rug by painting it as “free speech” seems reasonable once people believe that white extremists are isolated outliers like flat-earthers or people who like sugar on grits.

Furthermore, it absolves white people of any complicity. Beliving that the entire Republican Party isn’t a terrorist cell allows the majority of white voters to waltz into a voting booth, vote for a party that pushes this racist rhetoric and walk away with clean hands. They can listen to their uncle spout a version of this harebrained conspiracy theory at Thanksgiving and shrug it off as Uncle Jeb being “stuck in his ways.”

And technically, they are correct—white America is stuck in its ways. If this country wants to change, it must recognize white violence for its sheer ordinariness. We have to stop offering “thoughts and prayers” and deflecting with anecdotal evidence of Black-on-Black crime by asking, “what about Chicago” or we will continue this cycle of American racist exceptionalism.

Even if proponents of the great replacement theory are concerned about the white race’s fall from grace, perhaps they should ask each other:

“How did this floor get so slick?”

Michael Harriot is a writer, cultural critic and championship-level Spades player. His book, Black AF History: The Unwhitewashed Story of America, will be released in 2022.