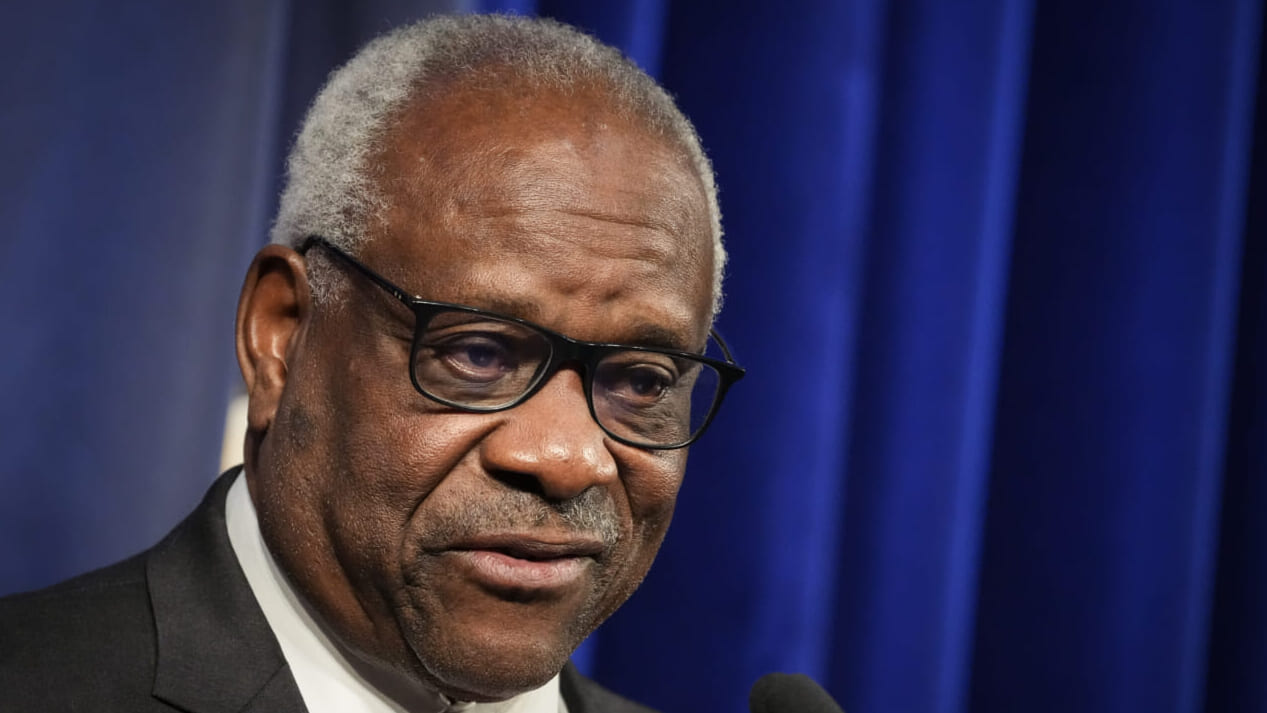 When Rep. Hakeem Jeffries (D-N.Y.) stepped up to the mic on Wednesday during a House Judiciary Committee hearing, he knew he was about to show out, and we all owe him a collective thank you for speaking truth and dragging Justice Clarence Thomas as thoroughly as he did.

Thank you, Rep. Jeffries. Thank you for saying what needed to be said about Justice Thomas, his insurrectionist wife, and his continued efforts to take away our basic freedoms.

Like most of us, Rep. Jeffries was fed up with Thomas’ self loathing and hypocrisy when Thomas decided to open his mouth and deign to say that, “[As a society,] we are becoming addicted to wanting particular outcomes, not living with the outcomes we don’t like…We can’t be an institution that can be bullied into giving you just the outcomes you want [sic].” All of which effectively translates into, you will get what we give you, and you can’t bully us about it.

And just when you thought he crescendoed, Jeffries tied it all together beautifully by calling out Thomas’ hypocrisy and directly named Thomas’ own wife, Ginni. “And if Justice Thomas really wants to deal with bullying in America, or this problem of people supposedly unwilling to accept outcomes that they don’t like, I’ve got some advice for Justice Thomas. Start in your own home. Have a conversation with Ginni Thomas,” Jeffries continued. Now for those who don’t know, Justice Thomas’ wife worked to overturn the 2020 election as revealed by dozens of text messages she sent to former White House Chief of Staff Mark Meadows.

The sad reality is that it’s all true. At no point during this read was Rep. Jeffries exaggerating or embellishing any of Justice Thomas’ actions or affiliations. Everything he said was true. And what’s more upsetting is that when you zoom out to review Justice Thomas’ various fixations on the bench, it’s clear that he behaves as though he hates himself and all of us. From voting rights to abortion, Clarence Thomas has been front and center working to take away our basic civil rights, surgically overturning court decisions that he didn’t like, as former Attorney General Eric Holder aptly put it recently.

Roe v. Wade is merely Thomas’ latest target, but most certainly not the first time he has worked to ignore and overturn decades of precedent that would result in harmful outcomes for women, pregnant people, and especially Black people writ large. Thomas was integral to gutting the Voting Rights Act when he joined with the 2013 majority opinion that effectively stated that racism was a thing of the past, and since 40 years had passed preclearance was no longer necessary to keep state officials from denying Black people their basic right to vote. Thomas doubled down on this sentiment in his own concurring opinion where he states that he would have gone further to strike down even more of the Voting Rights Act because, “Today, our nation has changed.” But seeing as Georgia, Texas, Florida, Arizona, Alabama and plenty of other states have all passed voter suppression laws just in the past two years that will disproportionately harm Black and brown people, our nation hasn’t changed much at all.

Justice Thomas has also registered his continued disdain for the Obergefell decision, which legalized same-sex marriage, after he voted against it in 2015. In October 2020, he declared, “Since Obergefell, parties have continually attempted to label people of good will as bigots [sic].”

What an absolute clown.

Thomas’ words, his sentiments are a preview of what’s to come from the Supreme Court after the right-wing justices render a decision that is primed to overturn Roe v. Wade. The Supreme Court majority will continue to live out their demented dreams of undermining precedent and thus additional Supreme Court rulings that are predicated on our basic right to privacy, as Vice President Harris noted after the draft Supreme Court decision was leaked.

With all of this history, it is particularly biting that now, in this moment of taking away yet another one of our basic civil rights, Justice Thomas claims that the nation is trying to bully him and the Supreme Court, when his entire legacy has been harmful to the people of this country, particularly Black people and Black women.

So, I have to repeat Rep. Jeffries’ question, “Brother Thomas, why are you such a hater?”

Juanita Tolliver is a veteran political strategist and MSNBC Political Analyst who previously served as National Political Director at Supermajority and Director of Campaigns at the Center for American Progress. Follow her on Twitter: @juanitatolliver.