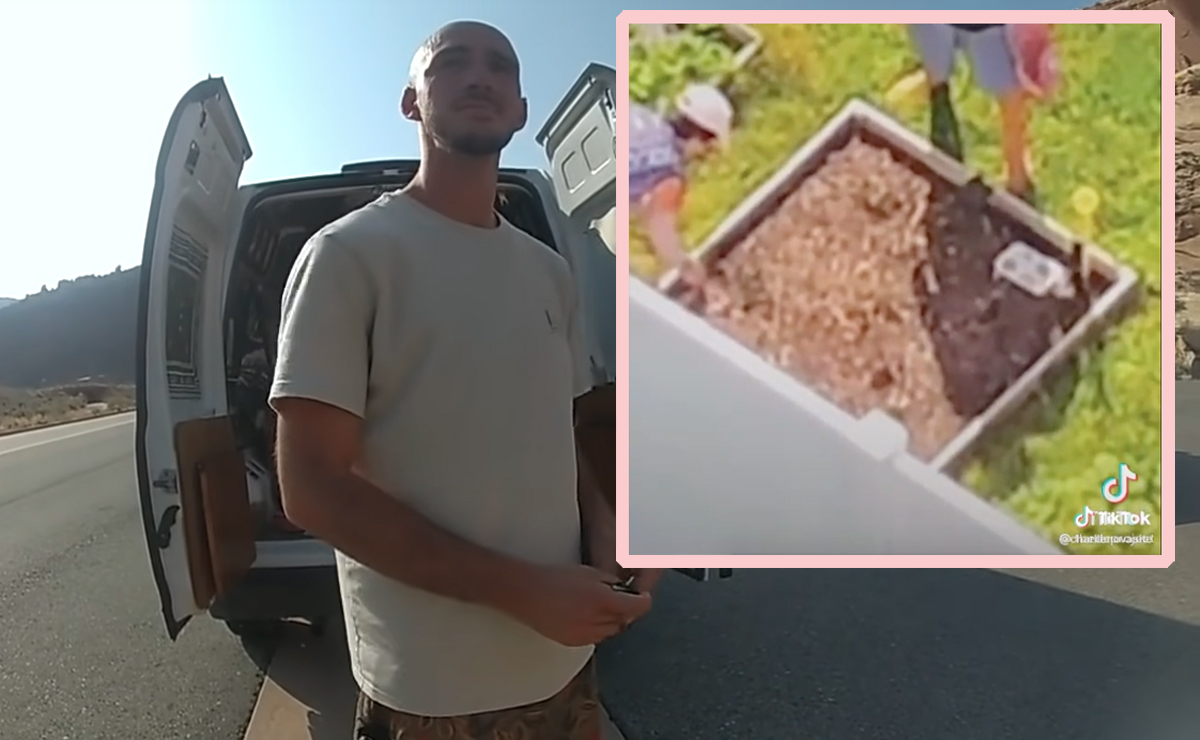 One of the wildest, most incredible, most wholly unbelievable things we’ve heard in a long time is the theory that Brian Laundrie never really left his parents’ home in North Port, Florida. Never hiked to the Carlton Reserve, didn’t double back north to the Appalachian Trail, none of that — because he’s hiding in the backyard, under the soil.

The supposition, which caught fire on TikTok last week, stems from a video, captured by a drone cam, in which the fugitive’s parents can be seen in their backyard visiting an empty flowerbed. Brian’s mother Roberta Laundrie appears to reach down her hand into the corner — and something else seems to pop up from the soil and meet it.

Internet sleuths believe this is the hand of their 23-year-old son reaching up to get handed something from Mom. Which is why they think, naturally, he must be hiding in a secret underground bunker.

Crazy, right? For sure. Only… that video is really hard to explain if it isn’t true…

While it’s unclear if the police or FBI have looked into the left field lead, we’re wondering if such a thing is even possible. One of the big reasons critics have given for denying the underground garden bunker theory out of hand, so to speak, is that in Florida you can’t have an underground bunker due to the water level in the ground.

Fox News reached out to experts on the matter: Ron Hubbard, CEO of Atlas Survival Shelters, and Gary Lynch, head of the Rising S Company. The shelter companies are both based in Texas, which is at the same latitude as Florida — so they would know whether the damp soil makes it impossible to install an underground bunker.

“It’s not a problem. You just have to make them heavy enough that they don’t float out.”

Hubbard agrees it’s easy enough to build such a chamber in such a climate that can keep the water out. He also says it’s a simple job to install a secret entrance — something he says is actually a really common request. Not only that but the argument that the Laundries would have needed to file for permits? Hubbard admits a lot of folks don’t bother with permits because there’s a chance they’d get turned down and a certainty they’ll get delayed. Instead they just wait for their neighbors to be gone and get it done.

Well, isn’t that something? It’s actually possible! But… is it probable?? Hubbard says the chances Brian Laundrie is living in a secret shelter under the garden in his parents’ backyard is “about zero.” He explains:

“The possibility of having a bunker there, his parents having a bunker, is absolutely 100% plausible. However, that being said, it didn’t look anything like if a hand came out of the bunker to me.”

Yes, Hubbard examined the video and says that although secret bunker entrances under flower beds are a thing (!!!), he doesn’t think it looked like one to him. Besides, he argues, the authorities “would have figured that out by now.”

Would the authorities have looked into the possibility of a secret chamber under the surface of the backyard? Really? We’re talking about the same police who, despite him being a person of interest in a very suspicious and controversial missing persons case, let Brian disappear from under their watch in the first place.

But yes, you would think the FBI would have looked into this over the weekend. Right?

Hubbard’s other thought, as someone who sells bunkers, is that it’s just so unlikely they have one. After all, so few people do!

“You probably have 1%, or less than 1%, of the United States has bunkers. But that being said, if they have a bunker, it could be highly likely.”

“My own opinion is he’s gotten as far away from Florida as he could possibly go.”

Seems like a reasonable guess. But for us to discount the possibility of this garden bunker theory, we’re going to need a good explanation for that hand!

What about you, Perezcious detectives?? Do YOU think you see a hand in the video? What else could it be??