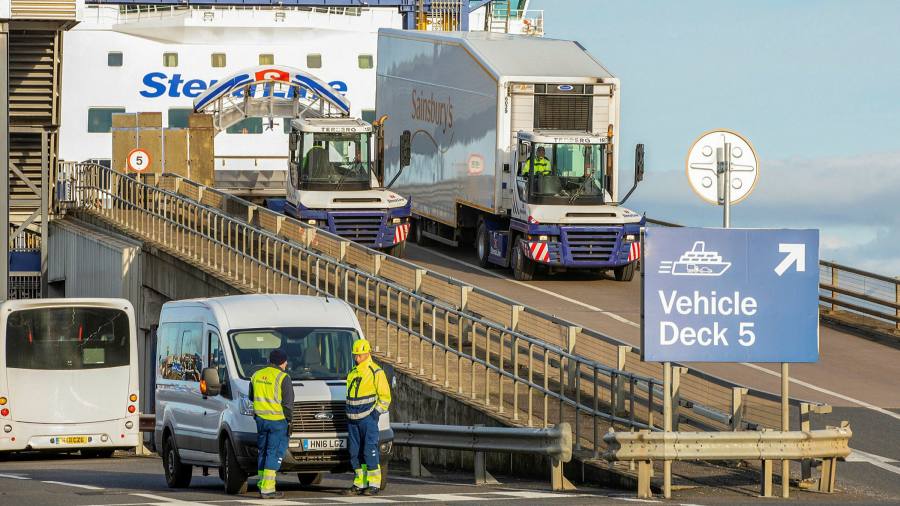 Trade links between Great Britain and Northern Ireland are being “worn away” by post-Brexit rules with the EU, says Lord David Frost, Britain’s Brexit minister. But try finding the data to prove that. Official Northern Irish statistics for trade stop at 2019.

At a conference I attended shortly after moving to Ireland this summer, the audience of academics, diplomats and officials issued a collective groan when the topic of Northern Ireland’s patchy economic data came up. Businesspeople describe being sent between departments on a quest for seemingly impossible-to-extract information about an economy once famous for the Titanic and linen and now focused on agriculture, construction and manufacturing. But the lack of timely data on exports and imports seems particularly odd, not least because of the prospect of a trade war with Brussels over UK demands to rewrite the rules for Northern Ireland.

Frost has rowed back, for now, on firing the first salvo — triggering Article 16 of the post-Brexit Northern Ireland protocol, a clause allowing either side to suspend key parts of the deal if it were deemed to be causing severe economic harm or diverting trade. But he has made it clear that option is still on the table if Brussels refuses to budge on his demands for greater concessions.

“Wouldn’t it be terrible to trigger Article 16 and find when the figures come out that there had been no difference, when the whole justification for doing so was that it was affecting trade,” said one business leader who asked not to be named. “They’d have egg on their face — but the damage would be done.”

Northern Ireland’s unique post-Brexit access to both the UK internal market and the EU single market is billed by Brussels as a significant advantage for the tiny region of 1.9m people, which in 2019 exported £11.3bn in goods to Britain and just £4.5bn to Ireland and £2.4bn to the rest of the EU.

According to official data published in Ireland this week, the republic’s imports from Northern Ireland rose 60 per cent between January and September, compared with the same period last year. But real-time data on trade between Northern Ireland and the British mainland is harder to come by; economists are left piecing together information from ports and other sources.

The lack of official figures is frustrating, but not the fault of Belfast’s small statistics agency, Nisra, argues Neil Gibson, chief economist for Ireland at EY. After all, Northern Ireland is far smaller, in both population and economic terms, than big UK urban centres such as Greater Manchester and “we don’t know how much Manchester trades with London, or what County Donegal trades with Dublin”, he said.

“In Northern Ireland, it does seem that the data are either lagging or absent in too many areas,” said Paul Mortimer-Lee, deputy director of NIESR. “I don’t fully understand the reason for that . . . but it’s difficult to make data-based decisions without any good data. What you can’t measure, you can’t manage.”

ESRI director Alan Barrett found that “very, very often [the data] does exist somewhere”. But, he added, statistical agencies may not publish the more obscure data on a regular basis. Indeed, ESRI’s models had “generated a market” for some numbers from Ireland’s statistics office, he said, predicting the same could happen in Northern Ireland.

“My view is that lots of data is gathered, but Nisra and the [UK’s] Office for National Statistics lack a kind of joined-up approach in presentation,” said Graham Brownlow, a senior lecturer at Queen’s University in Belfast. The region’s statisticians defend their output, saying their trade data depends on an annual survey. Fresher numbers — for 2020 — are out on December 15.

When it comes to data collection and analysis, Brexit uncertainty is exhausting enough. As one Northern Irish business figure put it: “You don’t want to wait 18 months to find there’s a problem.”