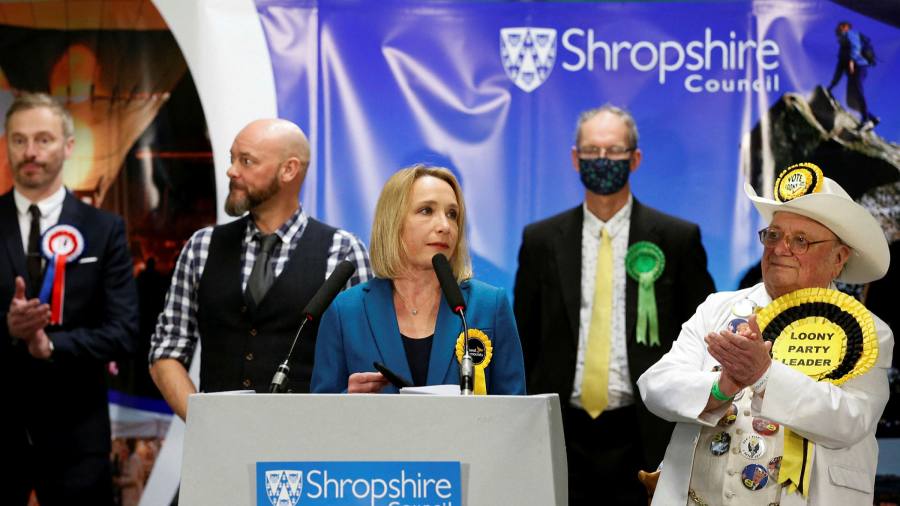 Boris Johnson has suffered another crushing blow to his authority as UK prime minister after the Conservatives sustained a heavy parliamentary by-election defeat in North Shropshire, a Tory safe seat for almost 200 years.

The Liberal Democrats overturned a 23,000-vote Tory majority to win the rural, Brexit-voting seat by a margin of almost 6,000 votes, capping a calamitous end of 2021 for Johnson.

The prime minister will now face further Tory questions about his leadership, following weeks of self-inflicted mistakes and a record rebellion by Conservative MPs this week over his “plan B” policy to tackle the UK’s latest coronavirus outbreak.

Sir Ed Davey, Liberal Democrat leader, said early on Friday morning that “the party is over” for Johnson, a reference to reports of Christmas parties held last year by the prime minister’s staff in breach of Covid rules.

Davey called his party’s victory a “watershed moment in our politics” that offers “hope” to voters across the country “that a brighter future is possible”.

The by-election was triggered by the resignation of former minister Owen Paterson, who stepped down after a corruption scandal.

Johnson’s botched attempt to save Paterson opened up accusations of tolerating “sleaze” in his government, and the Tory by-election campaign was dominated by criticism of the prime minister. That episode was followed by allegations of illicit Christmas parties last year in Downing Street.

The prime minister’s approval rating has slumped to an all-time low this month, and the dismal Conservative performance in North Shropshire will cause Tory MPs to further question whether their leader is still a winner.

A number of Tory MPs are thought to have written letters seeking a no-confidence vote in Johnson, but nowhere near the 54 letters — representing 15 per cent of Tory MPs — required to trigger such a vote have materialised.

With MPs on their Christmas break, an immediate fully-fledged coup is seen as extremely unlikely by most Tory MPs, although the North Shropshire result is certain to renew criticism of Johnson. Tory MPs have urged Johnson to shake up his Downing Street team and the party whip’s office.

The prime minister will also face another bruising fight with his own party if he tries to impose additional virus restrictions after about 100 MPs opposed a requirement for Covid passes in nightclubs and other events this week.

North Shropshire has been represented by Tory MPs since 1832. Overwhelmingly rural and with strong backing for Brexit, it was regarded as one of the safest Conservative seats in the country.

The Lib Dem performance was particularly remarkable given the party came third in North Shropshire in 2019. The Lib Dems are polling under 10 per cent nationally, and have just 12 seats in the House of Commons.

But the party’s victory in June’s parliamentary by-election in Chesham and Amersham, another formerly safe Tory seat, suggested the Lib Dems were capable of winning victories in Boris Johnson’s “blue wall”.

Davey said his party was committed to ousting Johnson from Downing Street, removing any ambiguity of how it might act in the event of a hung parliament.

That has opened the possibility of informal non-aggression pacts on the ground between the Lib Dems and Labour, as both parties target resources on seats where each is best placed to unseat a Tory MP.