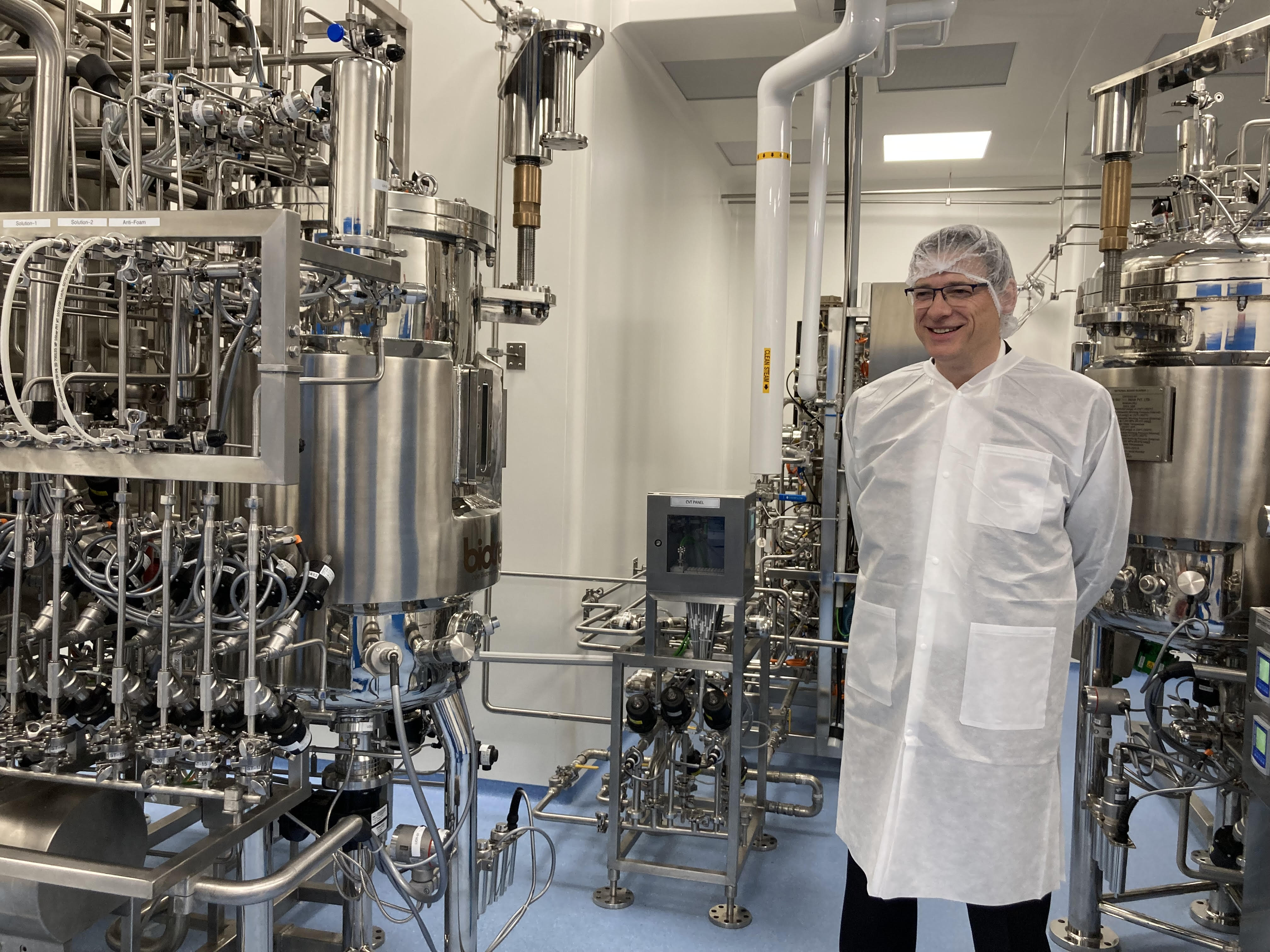 Tucked in the fields and wineries of Seattle suburb Woodinville, Wash., the new 70,000-square foot facility will produce vaccines against pneumococcal disease, which kills hundreds of thousands of children each year. If the company’s upcoming clinical trials are successful, the plant is positioned to produce tens of millions of shots each year for commercial use. Vaccines for other illnesses are also in the wings.

The Gates Foundation in November pledged up to $90 million to the company from its strategic investment fund, which supports the private sector. That funding builds on $100 million the company previously received from the foundation.

“We’re a fully committed partner, fully energized by what we’re seeing here and we have a lot of milestones to come. And I’d say this is a pretty big one,” said Gates in a brief statement at the facility.

GeekWire got a tour inside the facility, where rows of stainless steel incubators grow bacteria. Only one strain at a time can be made with the system, which shreds the microbes and separates out the component used in the vaccine — a part of the sugar coat on the outside of the bug.

After the sugars are generated, they are attached to the rest of the vaccine: a linker and a protein that helps prompt an immune response.

The entire process is fully automated and computer controlled. Once production starts, no human will need to be inside the rooms to operate the system while it’s running. Each room on the manufacturing floor has a different purpose, and the components are sent between them automatically in pipes that are steam cleaned between use. The air is pristine, entering the facility through a giant bank of humming filters.

“What you’ve made is super state of the art and super low cost, and super high quality,” said Gates.

Inventprise has come a long way since its was founded ten years ago in a 700-square foot space in Seattle by vaccine development veteran Subhash Kapre.

The Redmond, Wash.-based company now has more than 100 employees and several locations east of Seattle. Inventprise’s vaccine for pneumococcal disease is lined up for the start of phase 1 trials this fall in children and adults.

The company’s long relationship with the Gates Foundation reaches back to Kapre’s previous role. He earlier led a team of 3,000 as an executive at the Serum Institute of India, a large vaccine maker that also works with the foundation.

Kapre left that job in 2012 and returned to Seattle with plans to retire. But he was lured back into vaccine development by Trevor Mundel, president of global health at the Gates Foundation.

Kapre handed the reins over to CEO Yves Leurquin last fall, and remains with the company as executive chairman. Leurquin was previously an executive in vaccine programs at Takeda and Janssen.

The ultimate aim of the company is to provide low-cost vaccines to low- and middle-income countries. But the larger commercial market for pneumococcal vaccines, now dominated by Pfizer and GlaxoSmithKline, also may yield opportunity if Inventprise can edge into it. Pfizer’s Prevnar-13 vaccine pulled in $5.95 billion in sales in 2020.

Pneumococcal disease can be caused by dozens of different bacteria, and Inventprise’s investigational vaccine protects against 25 bacterial types. That’s more than Pfizer’s current shot against 20 and Merck’s against 15.

Inventprise’s vaccine is built on technology that enables multiple vaccine components to be strung together without losing vaccine potency, a problem with traditional vaccines, said Leurquin. The key is a “linker” molecule that connects the components and increases their visibility to the immune system, enabling a strong protective response.

“All the indicators that we have had so far confirm the expectation about the profile of the product,” said Leurquin.

The company is investigating a vaccine designed to protect against 32 strains. It also has preclinical programs for rotavirus, shigella, yellow fever, meningitis and other diseases.