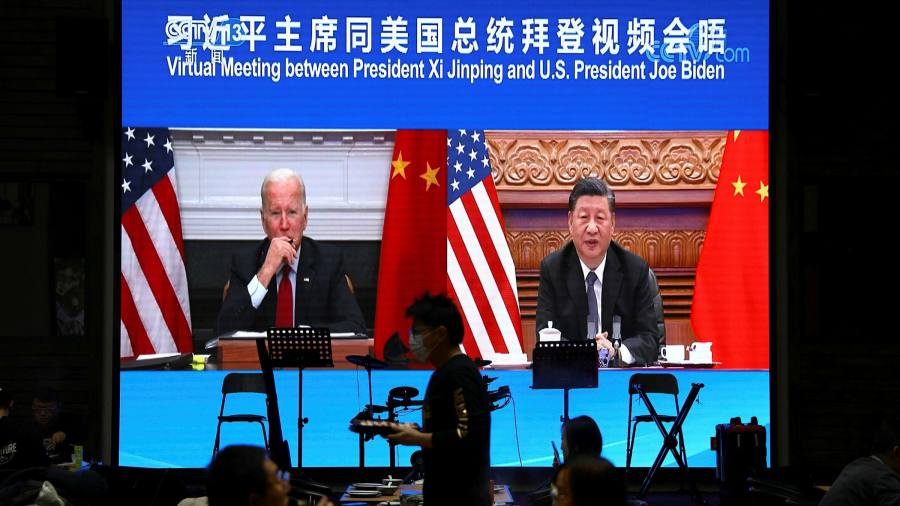 Joe Biden has told Xi Jinping that their countries must not allow competition to “veer into conflict” at the start of a virtual meeting that takes place amid rising tensions over Taiwan.

“We need to establish a common sense guardrail, to be clear and honest where we disagree and work together where our interests intersect,” the US president told his Chinese counterpart. “None of this is a favour to either of our countries . . . it’s just responsible world leadership.”

Biden wanted to hold an in-person summit but Xi has not left China for almost two years because of the coronavirus pandemic. US-China relations are mired in their worst state since the two countries established diplomatic ties in 1979.

“It’s the first time for us to meet virtually. Although it’s not as good as a face-to-face meeting, I’m very happy to see my old friend,” Xi said to Biden in his opening remarks, which were made in front of the media.

Xi said the countries should “respect each other, coexist in peace and pursue win-win co-operation” in a mantra that critics say means letting China pursue controversial policies such as the repression of Uyghurs and the crackdown on the pro-democracy movement in Hong Kong.

But the White House said that Biden raised US concerns about Xinjiang, Hong Kong and Tibet, as well as human rights more broadly. “He was clear about the need to protect American workers and industries from [China’s] unfair trade and economic practices,” the White House added, and “discussed the importance of a free and open Indo-Pacific”.

According to Xinhua, the Chinese news agency, Xi told Biden that the two sides needed to “manage differences and sensitive issues in a constructive way to prevent Sino-US relations from derailing”, while seeking common ground on issues such as climate change and the pandemic. He also compared the two countries to two large ships that needed “stable rudders” to avoid a collision.

The US has been alarmed by China’s military expansion and the situation around Taiwan, with Beijing flying more and more of its warplanes into the island’s air defence identification zone.

China tested a nuclear-capable hypersonic weapon in July and the Pentagon recently said Beijing would quadruple its nuclear stockpile to more than 1,000 warheads by 2030.

Xi pressed Biden to make sure he did not weaken the “one China” policy under which the US has recognised Beijing as the sole seat of government in China since 1979. The US implemented policy changes this year that have made it easier for American officials to engage with Taiwanese officials.

Xi warned that advocates of Taiwan independence and anyone supporting them were “playing with fire” and would only “burn themselves”, according to Xinhua. If anyone crossed China’s “red lines” on Taiwan, he added, Beijing would “have to take decisive measures”.

Drew Thompson, a former Pentagon official now at the Lee Kwan Yew School of Public Policy, said both sides had “very modest expectations” for the meeting. “The goal is to stabilise the relationship and manage the competition, not necessarily fix big problems,” he said.

Biden recently said the US would defend Taiwan against any attack from China, in comments that contravened the longstanding “strategic ambiguity” policy in which the US is vague about whether it would come to Taiwan’s aid. The White House immediately watered down Biden’s comments but they raised further concerns in Beijing about his stance.

Chinese analysts said Xi could not compromise on “bottom line” issues such as Taiwan and its campaigns to assert control over Hong Kong and the north-western Xinjiang region.

“China has a very clear position on [these issues] and will not be moved,” said Shi Yinhong, a foreign relations expert at Renmin University.