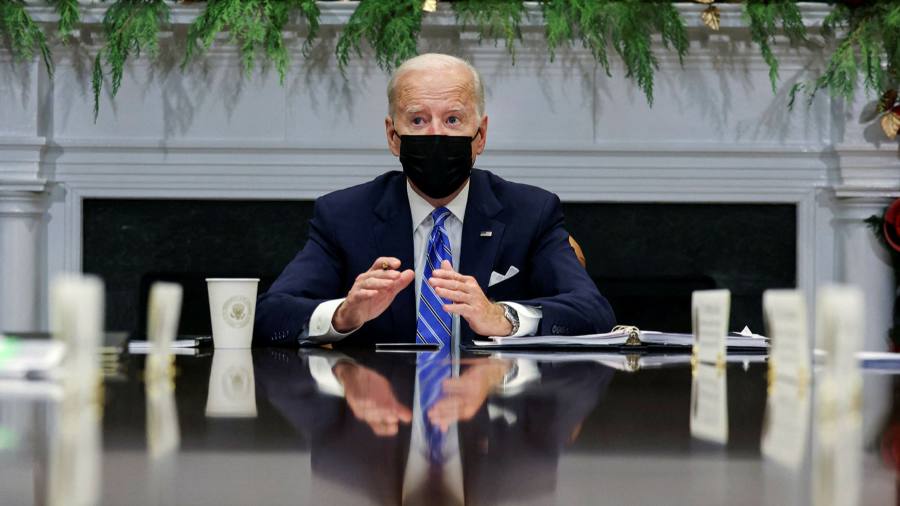 Joe Biden said it could still take “weeks” to secure the final passage of his flagship $1.75tn Build Back Better economic plan, meaning Democrats are likely to miss a self-imposed deadline to pass it by Christmas.

The US president’s admission — a blow to what has been his top legislative priority in recent months — on Thursday came after weeks of intense negotiations with Joe Manchin, the Democratic senator from West Virginia, who has been resistant to the legislation.

Biden said in a statement that he had held a call with Nancy Pelosi and Charles Schumer, the Democratic Speaker of the House of Representatives and Senate majority leader, respectively, to brief them on the negotiations. The US president said he remained confident he and Manchin could “bridge our differences and advance the Build Back Better plan, even in the face of fierce Republican opposition”.

However, he warned: “It takes time to finalise these agreements, prepare the legislative changes and finish all the parliamentary and procedural steps needed to enable a Senate vote. We will advance this work together over the days and weeks ahead; leader Schumer and I are determined to see the bill successfully on the floor as early as possible.”

The $1.75tn legislation designates large doses of government investment to the fight against climate change and the expansion of social spending in areas such as child care and education. It would be funded by raising taxes on businesses and wealthy Americans.

Even though the bill would be largely paid for over 10 years, Republicans have criticised it, saying it would further raise inflation because of its excessive cost — a concern shared by Manchin.

But Biden said he was determined to see it through in order to “give America’s families the breathing room they deserve”.

As the talks with Manchin dragged on with no sign of a breakthrough, Democrats on Capitol Hill grew increasingly frustrated with their colleague, who has been a thorn in the administration’s side for months, delaying the bill much longer than anticipated.

The reason Manchin wields so much power is that the upper chamber of Congress is evenly divided, meaning that if all Republicans oppose the legislation, every Democratic senator is needed to approve it.

“If you have a 50/50 split Senate, you can have one person, or two people, just stop everything and that is why people in our country should know that a 50/50 Senate sucks and we can’t get things done,” Mazie Hirono, a Democratic senator from Hawaii, told CNN on Thursday.

Democrats and the White House suffered another setback on Thursday after the Senate’s parliamentarian — a non-partisan civil servant who judges the compliance of legislation with Senate rules — said that their immigration provisions, offering legal protections to undocumented workers, could not be included in the Build Back Better bill.

“We strongly disagree with the Senate parliamentarian’s interpretation of our immigration proposal, and we will pursue every means to achieve a path to citizenship in the Build Back Better Act,” a group of Senate Democrats led by Schumer said in a statement late on Thursday.

“The American people understand that fixing our broken immigration system is a moral and economic imperative, and we stand with the millions of immigrant families across the country who deserve better and for whom we will not stop fighting,” they added.

This week, Biden had pointed to legislation protecting voting rights as a domestic priority for Congress before the holiday, but that too faces significant obstacles. Republicans are opposed, and both Manchin and Kyrsten Sinema, the Democratic senator from Arizona, do not want to change the rules of the chamber to allow it to pass with a simple majority.