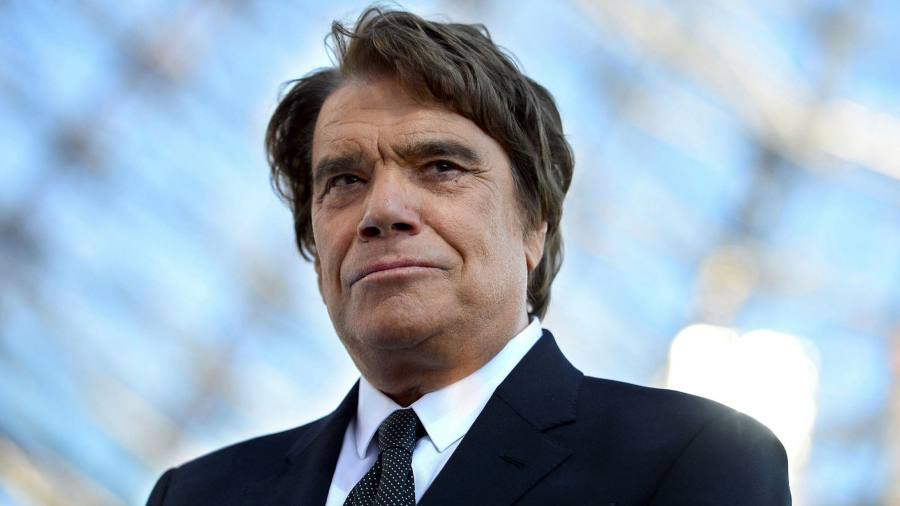 Bernard Tapie, the French businessman who rose from nothing to scale the heights of power in politics and sports despite being dogged by scandal, has died of cancer aged 78.

With a gift for self-promotion and not a little charm, Tapie became a symbol of les années fric (the money years) in 1980s Socialist-led France as he made a fortune buying bankrupt companies in industries from batteries to weighing scales.

But Tapie was never a dull chief executive in a suit, and he stood out in the often conservative French business elite. With his trademark mane of wavy hair and a deep tan, he seemed to live multiple lives — all of them colourful — earning vast sums of money only to lose it, winning elected office, and becoming a television presenter and pop crooner.

His biggest business coup — buying sports-gear maker Adidas — in the 1990s ended as his biggest nightmare, leading to a long legal battle he was still fighting when he died. The legal woes, which pitted him against the French state and banking establishment, have outlived him: an appeals judgment is expected on October 6.

As he rose in business in the 1980s, Tapie caught the eye of then Socialist president François Mitterrand, who backed his political career by helping him win a seat in parliament for Marseille. His fearless takedown of far-right politician Jean-Marie Le Pen in a televised debate in 1989 impressed Mitterrand, who later named him as minister of urban affairs, to the shock of others in the cabinet.

When he was named minister, he decided to sell his stake in Adidas to signal his independence, a decision he later told his biographer he bitterly regretted. “I’ve made many mistakes in my life, but that was the biggest one,” he said. “Selling one of the best known sports brands in the world for a shortlived stint as minister.”

Although he grew up in a working class family in Paris, Marseille became Tapie’s spiritual home and where his most glorious and lowest moments took place. He gained adulation as the owner of Olympique de Marseille when it won five titles and Europe’s top football prize in 1993, a first for a French club. Opprobrium followed, however, when he was convicted in 1995 on match-fixing charges, and served six months in prison after losing his appeals.

Soon after, he went bankrupt and was convicted in separate cases for corruption and tax fraud.

When Tapie emerged from jail in 1997 he told journalist Airy Routier he would exact revenge just as the main character did in Alexandre Dumas’s The Count of Monte Cristo. “I am Edmond Dantès. I will come back and crush them all,” Routier recalled in a 2020 documentary.

Tapie did indeed rebuild his business interests, helped in part by a spectacular arbitration award worth €403m that he won in 2008 stemming from the sale of his stake in Adidas.

That saga began when he sued the then state-owned Crédit Lyonnais bank, his former lender, alleging the bank had sold Adidas at a depressed price. Tapie ended up fighting the French state after Crédit Lyonnais failed.

The case turned into a political scandal after it was alleged that President Nicolas Sarkozy and allies had pushed for the settlement instead of continuing the court case. Since the payout to Tapie came from public coffers, it prompted outrage in some quarters and questions about whether he benefited from political connections.

L’Affaire Tapie, as it was called in the press, has cast a long shadow over the French business and political elite: in 2016 Christine Lagarde, now head of the European Central Bank, was convicted of negligence over her actions as France’s finance minister at the time (Lagarde did not appeal). Her then chief of staff, Stéphane Richard — now chief executive of state-backed telecoms group Orange — is still facing charges related to the payout and his appeal judgment is expected on Wednesday.

As the various cases dragged on, Tapie returned to his habits of conspicuous consumption. He splashed out on a 76-metre yacht he named Reborn, a private jet and bought the Marseille newspaper La Provence.

In 2015, a court ordered Tapie to return the Crédit Lyonnais settlement money, but as of mid-2021 he still had not done so amid the continuing legal challenges.

Prosecutors also alleged that Tapie and others engaged in fraud to get the settlement. He was tried along with five co-defendants and acquitted in 2019. Prosecutors appealed that decision and a new trial took place in May 2021.

Weakened from a years-long battle with cancer, a white-haired, rail-thin Tapie appeared in court on one occasion before his family said he was too frail to attend.

Tapie went public in 2017 with his diagnosis of stomach and oesophageal cancer by telling a well-known Olympique de Marseille supporter, who announced it on social media. The next day, fans at OM’s Velodrome stadium chanted his name and unfurled banners reading: “Courage! We are with you boss.”

Since then Tapie had spoken out about his battle with the illness and advocated for other sufferers. “Each person has to find the motivation for their combat,” he said in an interview with broadcaster TF1 in April this year. “Science is advancing incredibly quickly, so someone with a supposedly mortal cancer now can still have hope.”

In the same interview, he said there were things he still wanted to accomplish and mused about acting in a movie for his old friend, the director Claude Lelouch. “He wants to make a last movie with me and I am crazy happy about it!”

Tapie is survived by four children and his wife of 34 years, Dominique Tapie.

The story was corrected on October 4, 2021 to include the fact that Christine Lagarde was convicted of negligence in 2016.