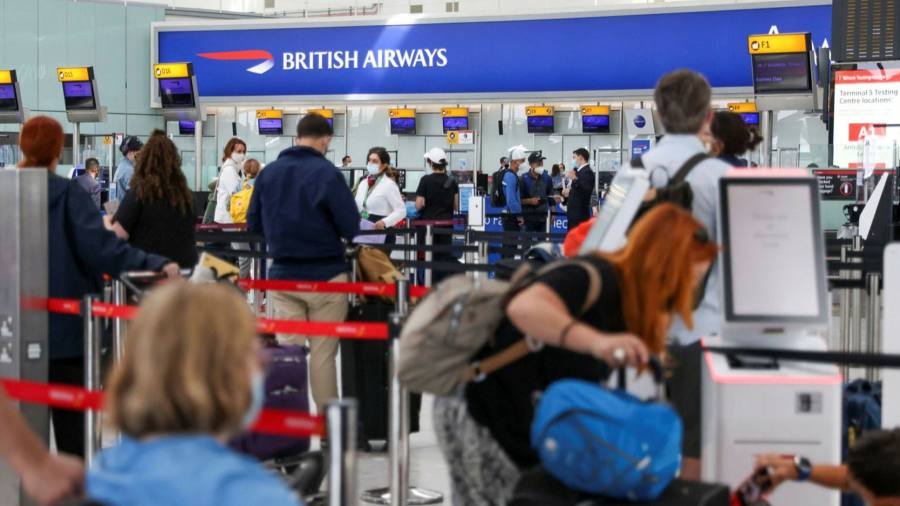 British Airways is facing disruption at London’s Heathrow airport this summer after hundreds of staff voted to strike, the latest industrial action set to hit passengers in the UK as the railways ground to a virtual standstill again on Thursday.

Both the Unite and GMB unions said their members had voted in favour of industrial action in two separate ballots of check-in staff in a dispute over pay.

The airline expects the strikes to affect about 700 staff, roughly half its check-in workforce at Heathrow.

The unions are calling for BA to reinstate a 10 per cent pay cut implemented during the pandemic.

“Unite is now giving BA a short window of opportunity to remove the 10 per cent pay cut before announcing strikes which will cause severe disruption to flights this summer,” the union said.

The airline, which has lost £4bn over the past two years, has instead offered a one-off 10 per cent of salary award, rather than a full pay rise. This was accepted by other parts of the business, including crew and ground staff.

As Britain’s railways were disrupted by strikes for the second time in three days, officials said ministers remained “hopeful” that a pay deal could be struck with the unions, government officials said.

The RMT union resumed strike action on Thursday in a dispute over pay, job losses and working practices.

Only about 20 per cent of normal train services are expected to run and routes in many parts of the country will be closed. Another strike is scheduled for Saturday.

Talks between the RMT and rail industry resumed on Thursday morning, after breaking up in a war of words on Wednesday when the union refused to negotiate while the threat of compulsory redundancies hung over members.

Bosses at Network Rail, which owns and manages the infrastructure, have said they will move forward with 1,800 redundancies and changes to working conditions, but said the “vast majority” of the job losses could be voluntary.

“The RMT are being far more reasonable in the private talks than the bellicose language in public,” he said. “We’re still hopeful we can do a deal.”

Another senior official said the fact the RMT had not announced further strike dates this summer “suggested there is still space to do a deal”.

RMT leader Mick Lynch said it was “extremely likely” there would be more strikes if a deal could not be agreed, and blamed the government for holding back negotiations.

Andrew Haines, chief executive of Network Rail, said there was a pathway to a deal that included higher pay rises and very few compulsory redundancies, in exchange for changing working practices within the public body’s large maintenance business.

“We have all the components there, we have to unlock the maintenance efficiency,” he said.

Haines threatened on Wednesday to go over the heads of union leaders and put the offer straight to Network Rail staff in a company referendum on maintenance changes, which he admitted would be escalatory and a last resort.

Eddie Dempsey, a senior RMT executive, said maintenance staff were already very flexible and he did not expect them to back the company’s proposals.

Ministers on Thursday outlined new legislation to make it easier for businesses to use “skilled, temporary” agency staff to reduce disruption caused by industrial action.

“Repealing these 1970s-era restrictions will give businesses freedom to access fully skilled staff at speed, all while allowing people to get on with their lives uninterrupted to help keep the economy ticking,” said Kwasi Kwarteng, the business secretary.

Kate Bell, head of employment rights at the Trades Union Congress, said the plan was “an attack on the right to strike”.