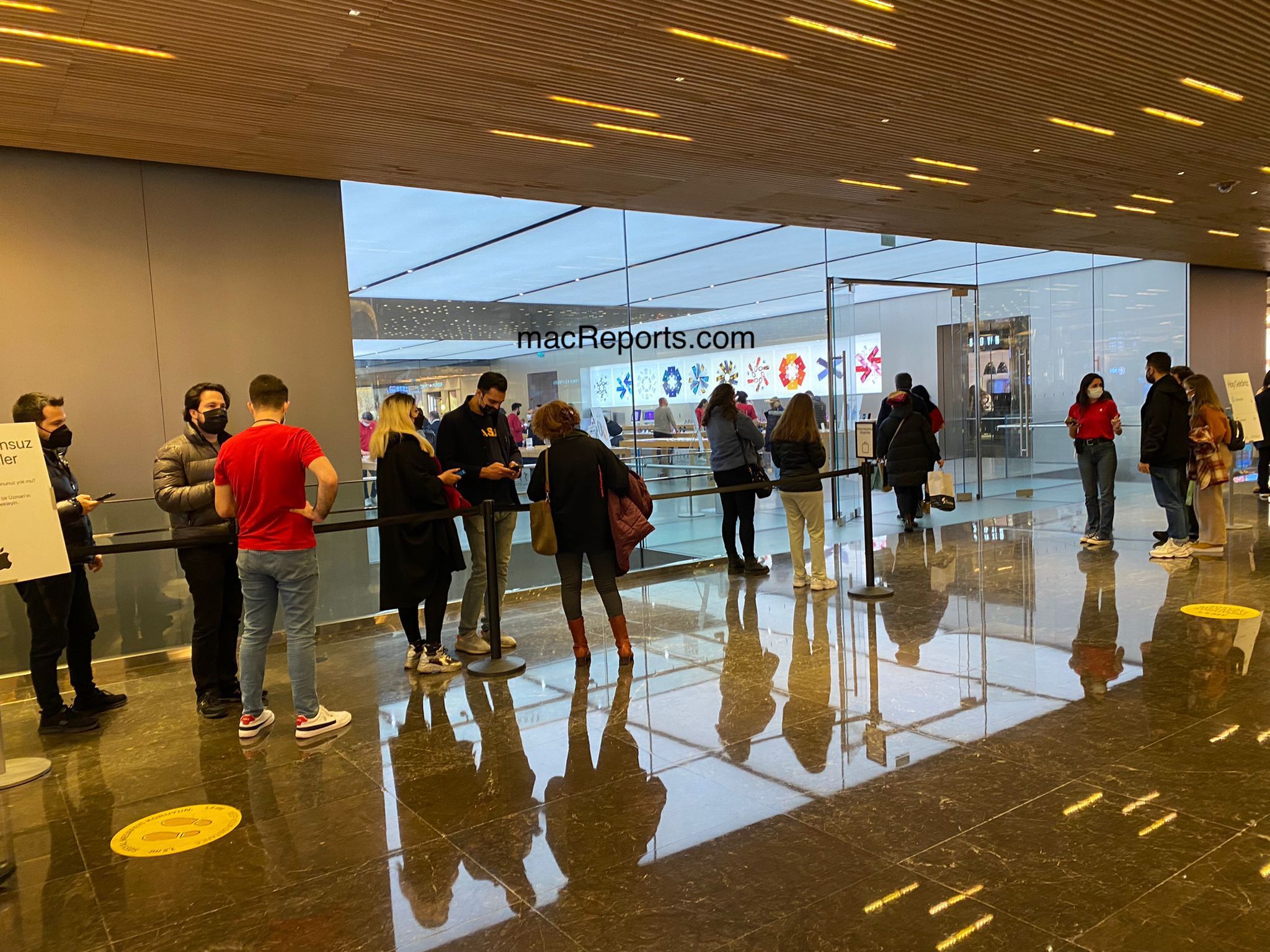 Apple customers in Turkey are being turned away at retail stores by staff following the halt of online product sales in the country, although the exact reason for the in-store sales halt is unclear.

According to macReports, the halt is due to rapid currency fluctuations as the Turkish lira has declined significantly in recent days, and store staff are telling customers that normal sale operations will resume once the Turkish economy stabilizes.

Other Turkish sources have claimed that the stores have been selling products today and that any halt is simply due the stores running out of available stock to sell, a supply chain situation that has been ongoing for some time and has regularly resulted in Apple stores limiting in-store sales.

Images shared by macReports show customers waiting outside two Apple Stores in the country’s largest city, Istanbul. According to the report, customers with service appointments are being attended to, while customers looking to purchase products are being turned away. Retail staff is also reportedly telling customers that once sales resume, a price hike can be expected for products due to the Turkish lira collapsing.

Apple stopped the sale of products in Turkey yesterday following a historic economic collapse which resulted in the Turkish lira dropping 15%. At the time of writing, a Turkish lira is equivalent to approximately 0.082 U.S. dollars. We’ve reached out to Apple for a statement.

Note: Due to the political or social nature of the discussion regarding this topic, the discussion thread is located in our Political News forum. All forum members and site visitors are welcome to read and follow the thread, but posting is limited to forum members with at least 100 posts.

Apple recently announced that it will soon be opening a second retail store in the heart of Berlin. The store will be located on the popular Rosenthaler Strasse shopping street in Mitte, the historic center of Germany’s capital city. Apple has yet to share a specific opening date for the Rosenthaler Strasse store, which will accompany Apple’s existing Kurfürstendamm store in Berlin….

Apple appears to have temporarily halted sales of devices in Turkey as the country’s economic crisis deepened on Tuesday morning. The lira dropped 15 percent after Turkish President Tayyip Erdogan staunchly defended recent rate cuts, reports Reuters. Right now, Apple’s Turkey storefront is up and operational, but no devices are able to be added to a virtual cart or purchased at this time…

Apple and Amazon were today fined a total of more than 200 million euros ($225 million) by Italy’s antitrust authority for alleged anti-competitive cooperation in the sale of Apple and Beats products, reports Reuters. The fines are the culmination of an investigation that began last year over allegations that the two companies had been blocking the sale of Apple and Beats devices to…

Nomad today kicked off a new sale that is taking 20 percent off most full-priced products across Nomad’s entire website, using the code SAVE20. This sitewide sale will last for two days. Note: MacRumors is an affiliate partner with Nomad. When you click a link and make a purchase, we may receive a small payment, which helps us keep the site running. If you haven’t shopped on Nomad before,…

Facebook, now rebranded to Meta, is looking to open physical retail stores where customers will be able to experience the wide range of products it has to offer, such as Oculus headsets, in a “welcoming” and “judgment-free” experience, according to a new report from The New York Times. The report says that Facebook executives began floating the idea of a physical retail store last year, but…

Apple today opened a new retail location in the Los Angeles area with the official launch of Apple The Grove. Apple has had an Apple Store in The Grove shopping area for close to 20 years, but the recently opened store is in a new location. To celebrate the relocation of Apple The Grove, Apple last night hosted a Q&A event with the cast of popular Apple TV+ show “Ted Lasso,” including Jason…

The Apple Store app for iOS was updated today with a new feature that lets you easily save items to lists, share them with a specialist online or during a store visit, and then get a recap of your visit to help you later purchase your items. After you’ve saved items to a list, they can be found in a new Saved Items section on your account page accessible via your profile picture at the top…

Apple Stores to Drop Mask Requirement for Customers in Many U.S. States

Apple will no longer require customers to wear a mask to enter many of its retail stores in the United States, reports Bloomberg. Mask mandates will disappear at several stores starting on Friday due to positive trends in vaccinations and declining COVID-19 cases. More than 100 stores will drop the mask mandate starting Friday, with the policy then expanding to additional stores based on…

Apple this week opened its newest Apple Store in New York City, Apple The Mall at Bay Plaza, which also happens to be the first Apple retail location in the Bronx. Apple Store aficionado Michael Steeber teamed up with Storeteller for a virtual 360-degree walkthrough of the new location, giving us an in-depth look at the features and improvements that Apple has brought to its latest Apple…