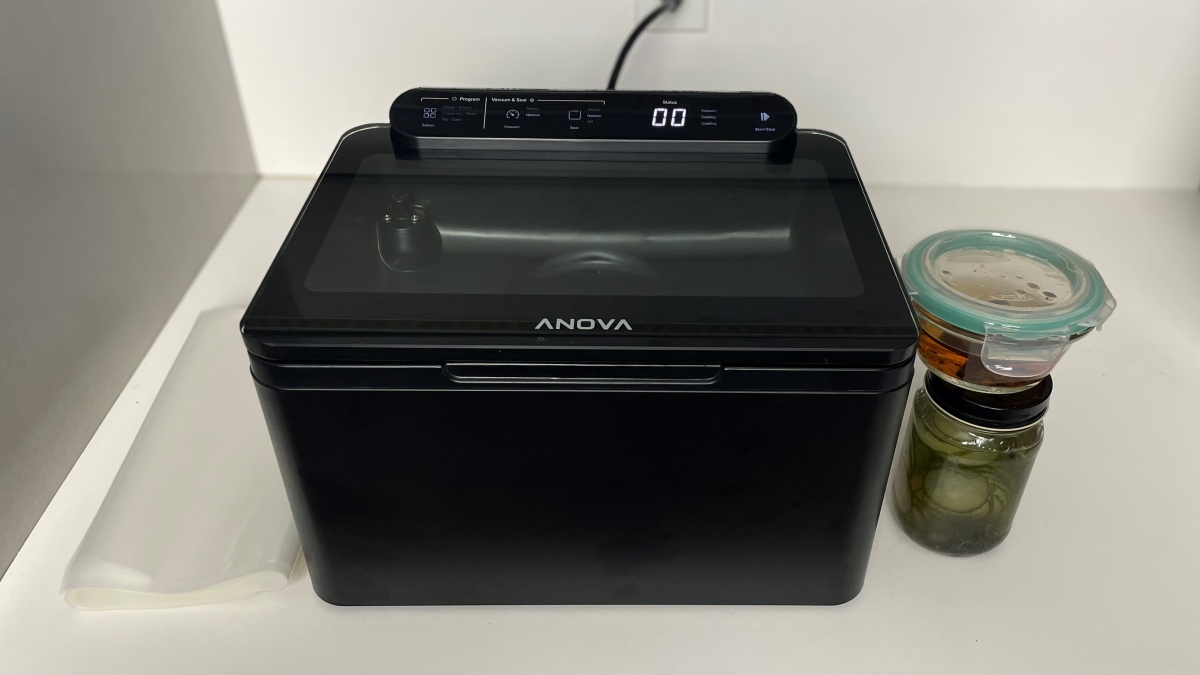 Confession: when Anova recently announced the launch of its new Precision chamber vacuum sealer (retailing for $349.99), I had no clue what it was. Sure, I knew what a vacuum sealer was. I’ve had one for years to maintain the freshness of my groceries and save on storage space by sucking out all that icky outside air and sealing it away. But a chamber vacuum sealer? What could this boxy thing do that my compact regular sealer couldn’t? Turns out, a heck of a lot more.

This new release is a multifunctional, pressurized chamber designed to, of course, vacuum seal, but also to infuse, extract, compress, pickle, dry, and cool with the click of a few buttons. As someone who is constantly tinkering in the kitchen for work and in my personal life, the thought of saving hours and even months of wait time to see if my latest recipe was successful had me intrigued. Naturally, I had to find out if the Precision chamber vacuum sealer was truly the creative time-saver in the kitchen that it claimed to be. Spoiler alert: yes!

Before I dive into mad scientist mode, let’s talk product details and setup. The chamber itself comes completely assembled and couldn’t be easier to start using. You simply unbox it, plug it in, press the on/off switch and choose a program. It’s about the size (13.6 x 11.2 x 8.9 inches) and weight (18.7 pounds) of a small microwave, so you need some solid counter space for it. It comes with 20 smooth, clear plastic bags (notably different from the mesh-lined bags regular edge sealers use) for vacuum and sealing. I was surprised to find it did not come with any jars since a lot of the pictures and recipes show them, nor are they sold on the site. Not to worry, any jar 2.8 inches or shorter will suffice. I found the eight-ounce options from OXO and Snapware fit perfectly.

While the vacuum sealer takes up a good chunk of counter space, the actual chamber is relatively shallow.
Credit: AnnMarie Mattila/Mashable

The small jar requirement indicates just how shallow the actual workspace is in the chamber, only about three inches deep. That works to your benefit when laying a bag in to be sealed because you’re not reaching too far down. The surface is mostly flat with a divot right in the center so jars can nestle in comfortably as well.

The chamber sealer works by removing all the air from the entire chamber, rather than just out of the bag or jar like conventional sealers. Those low-pressure physics are why a chamber sealer can not only vacuum and seal all sorts of products (even liquids like soups) but can also speed up the usually long processes indicated on their pre-programmed settings: infuse/extract, compress/pickle, and dry/cool.

Putting the chamber vacuum sealer to the test

Okay, now the fun part. Since I had no experience with a chamber vacuum sealer, I decided it was probably best to start with the basics. I went right to the source and decided to tackle a bunch of the recipes Anova developed for the product with the assumption that if those recipes worked well, then it’s a good sign of basic functionality. That would also make me feel a little more comfortable trying my own experiments. The site breaks the recipes up by function and that’s exactly how I decided to approach the testing.

The infuse/extract function uses low pressure to remove the air and water from food and replace it with the flavor molecules. That means you can make your own flavored oils like chili oil or alcohols like gin and limoncello that are infused with the flavor of spices, fruits, vegetables, etc. in a few minutes rather than days, weeks, or months.

The quick-start vanilla extract recipe immediately jumped out at me, since my professional background is in pastry, and I use it several times a week. Typically, the process of making an extract takes a few minutes of assembly but months to steep — like two to six at a minimum. No thanks. The Anova promised to cut that steep time considerably and have it ready in a week. All I had to do was add a vanilla bean to the jar with rum, press infuse/extract, and then start. Each cycle took 92 seconds with a convenient countdown timer. Twelve cycles and one week steeping later, voila! Vanilla extract, as promised. It’s not as dark as commercial extracts and it’s a wee bit weaker, but I think with a little tinkering, I’ll nail it and still save a considerable amount of time in the process.

Next up, I went for the limoncello because well, I really wish I were in Italy right now. Traditional limoncello takes about two weeks to steep. Anova limoncello takes only three cycles and it’s glowing yellow, ready to consume immediately. I had my friend, who lived in Italy for 15 years mind you, try it and she was impressed. “Seriously, this took you less than 10 minutes to make?” Yup. I promptly made two more batches, as I contemplated my own experiments for the future of this function. I’m thinking spiced rum and garlic oil.

Similar to the other functions, compressing and pickling are possible because the low pressure removes the air from cells, making them collapse and become denser or fill up with whatever might be around, like brine. I’ll admit I was a bit unenthusiastic about making compressed pink fruit garnish recipes for cocktails, but the pickle recipes? Say no more. I went right for the dill pickles (though I skipped the star anise for personal reasons).

Think of all the vegetables you can pickle!
Credit: AnnMarie Mattila/Mashable

Each cycle is 42 seconds with an additional four-second release. I like my pickles extra brined, so I did three cycles per batch. Because the container capacity is small, I had to repeat the process three times to use up all the brine and half of a large English cucumber. That being said, the whole process took less than 10 minutes, and they were ready for immediate consumption. Regular brining can take days or weeks, depending on the size of the pickles and the amount of brine flavor you wish to impart. That versus 10 minutes for crispy, puckery pickle chips? I’ll take the 10-minute option any day. And since that was so successful, I think I’ll opt for some pickled jalapeños or cauliflower next.

As a trained baker, I usually know how to plan ahead. But there are times that I just wish the world would speed up, like when I smell fresh bread in the oven. Enter the dry/cool button. The pressurized chamber pulls out the moisture in a product, which allows the items to cool quickly. This comes in handy with bread because it tastes gummy when served too hot.

I was able to handle fresh-out-of-the-oven rolls after a 30-second cycle in the vacuum sealer.
Credit: AnnMarie Mattila/Mashable

Thankfully, I was recipe testing whole wheat cloverleaf rolls the week the machine arrived. Typically, I like to serve the rolls warm and let them sit at room temperature for about five to 10 minutes. One 30-second interval had the same effect, making them cool enough to handle with my hands but warm enough to melt a pat of butter. Three intervals cooled them completely, which would normally take about a half hour. That’s certainly convenient, especially when I’m recipe testing to know if I like the batch. However, the largest size you can cool is only 4 x 8 inches, so essentially a demi baguette. I find that a bit too limiting since I like making bigger loaves. So, while the function is cool (literally), I honestly don’t think it’s worth raving about like the other preset functions.

Back to basics: The vacuum and seal function

After having so much fun playing with the presets, I almost forgot this thing was a vacuum sealer, too. The vacuum has two options, strong and normal, as does the seal. The benefit of the chamber style is that because it doesn’t suck air directly out of the bag, it won’t pull liquids out. That means it’s much easier to seal and store soups or marinate proteins in liquid than with a standard vacuum sealer.

I gave it a shot with a few tuna steaks in a lemon and olive marinade. You lay the bag flat in the chamber with the open side facing you along the sealing bar, lift the little bag holder up, tuck the edge of the bag under it, and press the holder back down. Close the lid, choose the vacuum option (I went with normal), and seal option (again, normal) and in a matter of seconds, it’s ready. I found the bag tuck motion into the holder a little awkward and questioned whether it would work, but it did. Perfect suck, perfect seal. Since I have this machine now, I can easily see it replacing my previous standard sealer.

This functionality is not only great for marinades, sealing in freshness and saving room for storage, but also perfect for the ever-popular sous vide method of cooking. It’s also great for hydrating doughs like pasta and cookies quickly, which I never thought of until I read the website. Honestly, I almost always choose the instant gratification of baking chocolate chip cookies right after making the dough over the potential flavor improvement by allowing them to hydrate overnight in the refrigerator.

To see if this machine could help, I made two batches of dough. The first I hydrated overnight and the second I popped in the strong vacuum for 30 seconds with no seal. I baked them off and found no discernible difference in the flavor or consistency between the two, but they both benefited from the hydration with lovely, consistent browned exteriors. The machine gave me both the instant gratification of baking immediately and the flavor enhancement of resting. I believe they call that a win-win.

The vacuum sealer hydrates dough without having to let it sit overnight.
Credit: AnnMarie Mattila/Mashable

One thing to note

Definitely follow the instructions and do not overfill the jar or bag no matter what process you’re using. You will see some significant bubbling during a lot of the pre-programmed cycles, and you need the space so it doesn’t spill over.

Overall, I was really impressed with this machine for the infuse, extract, and pickle functions. It’s perfect for someone like me who loves experimenting in the kitchen and finds joy in the creation of artisanal products, but also hates waiting. It saves hours, days, weeks, and in some cases, months of anticipation. I’ve only had it for a few weeks and already have a long list of fun, new things I want to try. I might even finally break out the sous vide that I’ve never used. I will most certainly donate my old vacuum sealer in favor of this multitasker.

That being said, this machine isn’t for everyone. You have to be an avid creator to make it worth the $350 price tag (though others on the market are upwards of $1,000 by comparison, I will note). You will need to buy your own jars and eventually bag refills since those aren’t reusable. It also takes up a chunk of counter space if that’s a concern. And for such a large machine, the capacity is very small. If you’re into batch cooking, beware! This machine is meant for small batches. But if you’re all about experimenting and creating in the kitchen, definitely check this out because it’s easy, fun, and saves an incredible amount of wait time. Now if you’ll excuse me, I’ve got a summer of limoncello drinking to prep for.