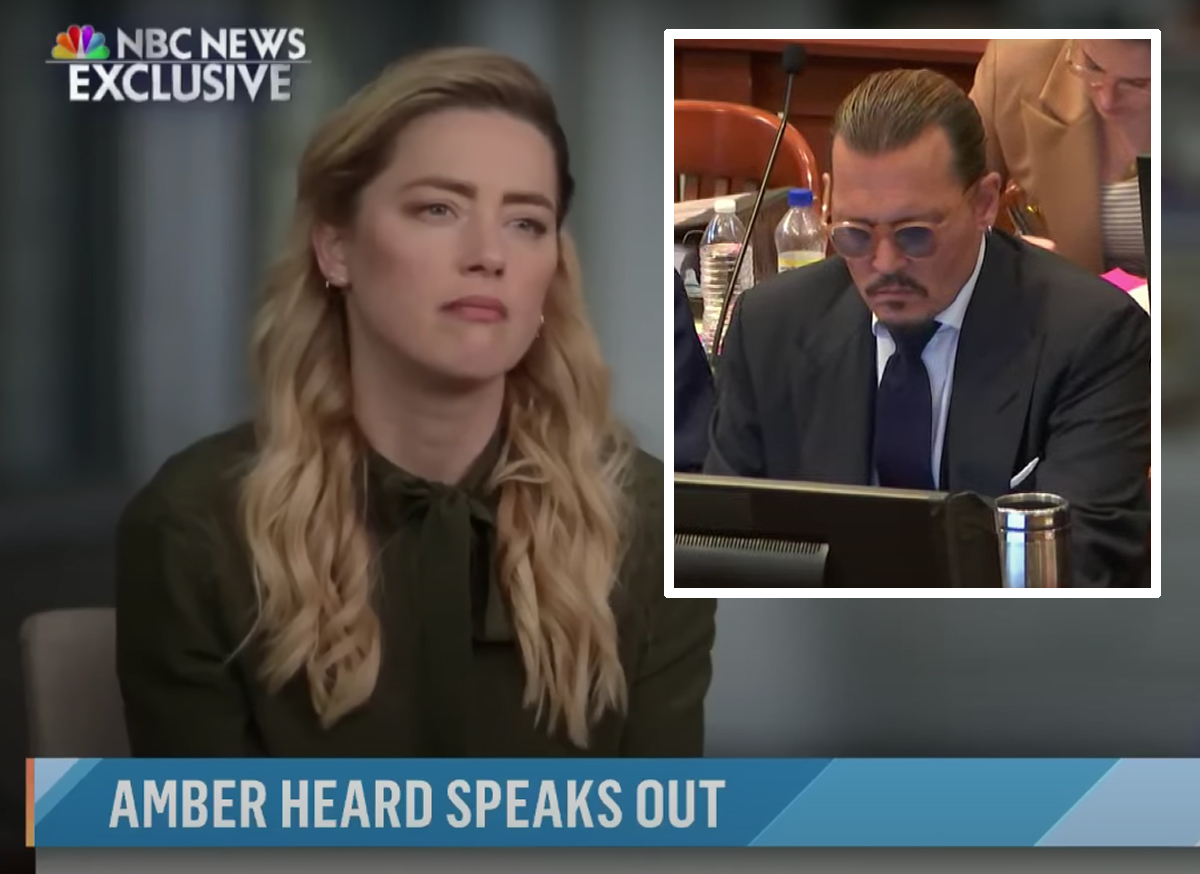 Amber Heard is expressing her frustrations about how Johnny Depp’s defamation trial panned out — and claiming that one potentially crucial piece of evidence never made it to the courtroom.

Ahead of her explosive sit-down interview with Savannah Guthrie, which will air Friday night, the Aquaman star apparently turned over “a binder worth of years of notes dating back to 2011 from the very beginning of her relationship” with Depp to NBC‘s Dateline, and those notes are said to detail instances when she claimed to her therapist that the actor “hit her, threw her against a wall, and threatened to kill her.”

Notes taken by Heard’s therapist during their sessions could be seen on-screen during the 20-minute preview from the Dateline episode released on NBC’s Peacock, while Guthrie told viewers that the binder contained several descriptions of violence the actress claimed she had faced at the hands of Johnny.

“There’s a binder worth of years of notes dating back to 2011 from the very beginning of my relationship that were taken by my doctor who I was reporting the abuse to. Her notes represented years, years of real-time explanations of what was going on.”

According to Dateline, the notes include descriptions of alleged violence dating back to January 2012, when Heard told her therapist Depp “hit her, threw her on the floor.” Eight months later, he allegedly “ripped her nightgown, threw her on the bed,” per Deadline, and “he threw her against a wall and threatened to kill her” in 2013.

As for why the notes weren’t shown in court? Amber’s legal team was barred from submitting them as evidence by the judge in the trial, who dismissed them as “hearsay.” Hmmm…Of course, it was reported the judge also dismissed evidence Johnny’s team wanted to bring in too, presumably under the same reasoning.

Related: Amber Responds To Rumor She Was Just FIRED & Recast In Aquaman 2!

Despite being found guilty of defamation, Heard isn’t walking back any of the claims she’s made against Depp. She also insisted in her Dateline interview that she isn’t a “vindictive” person who is trying to “seek vengeance” against him either, saying in the preview:

“One thing I can tell you is, one thing I’m not is vindictive. This would be a really lousy way to get vengeance. As silly as it is to say this out loud, my goal – the only thing I can hope for at this point… I just want people to see me as a human being.”

Guthrie wasn’t letting her off easy, though. The NBC anchor grilled Heard about testimony given by several witnesses who said they “saw Heard instigate violence” against Depp during their relationship — to which the actress replied that insisting she “never had to instigate it” and that she only ever “responded to it,” claiming that she only became violent towards the actor “to cope with” his own alleged violence.

“When you’re living in violence and it becomes normal, as I testified to, you have to adapt, you adopt strategies to cope with it. If it meant, as I testified to, if it meant the difference between a broken nose or a sore cheek, I would do it… I got hit for a very long time before I even knew how to defend myself.”

When Guthrie asked why no other woman has come forward with allegations of abuse against Depp, Amber offered:

“Look what happened to me when I came forward. Would you?”

For their part, members of Depp’s legal team are rolling their eyes over Heard’s interview. In a statement given to Dateline, they slammed Heard for continuing to air her allegations so publicly even after the trial concluded, saying:

“It’s unfortunate that the defendant and her team are back to repeating, reimagining and re-litigating matters that have already been decided by the Court and a verdict that was unanimously and unequivocally decided by a jury in Johnny’s favor.”

Despite the outcome of the trial, Heard insisted she’ll “stand by her testimony to her dying day,” maintaining that she was and always will be a “survivor.” She said:

That said, Heard also insisted that she wants nothing more than to move on with her life, telling Guthrie:

“I look forward to living my life and I have a long one, I hope, in front of me. And I will continue to walk through this with my chin up.”

[Image via Law and Crime/NBC News]