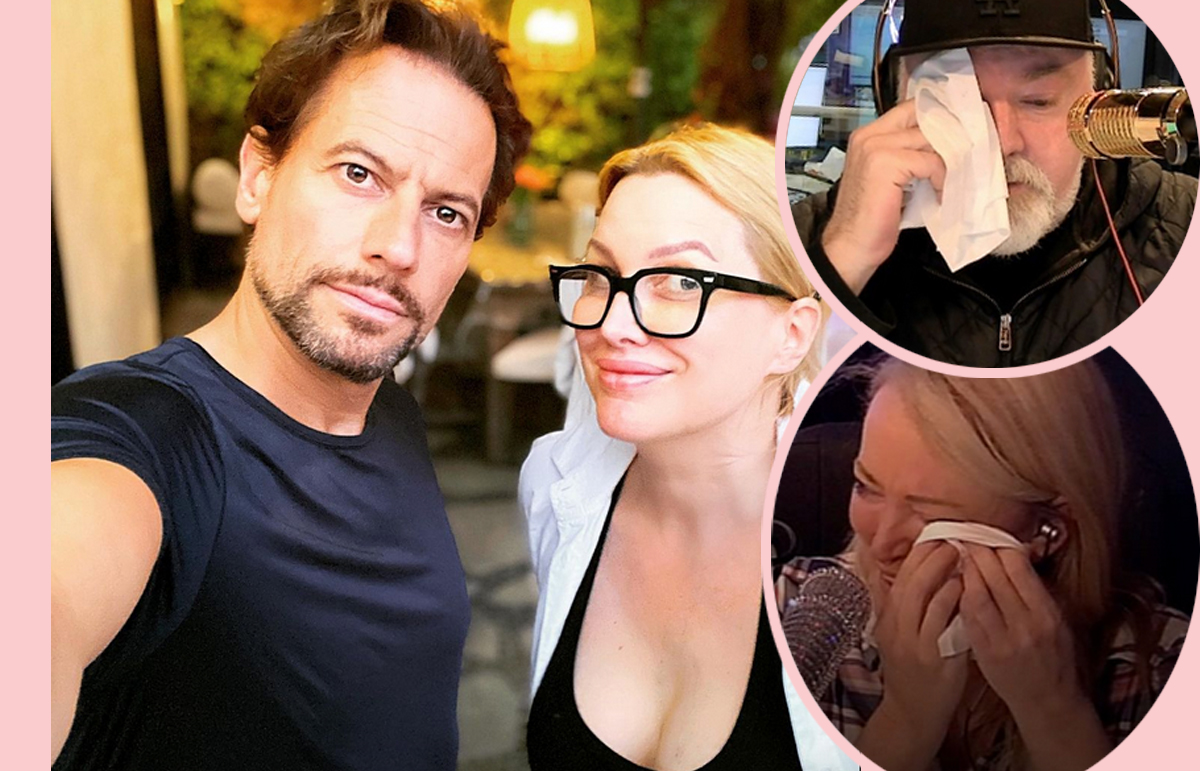 Alice Evans has taken her crusade to a new medium: the airwaves.

The Vampire Diaries alum has been vocal about her breakup ever since announcing that her husband Ioan Gruffudd left her and their daughters back in January after two decades together. That escalated last month when the Fantastic Four star went Instagram official with his new girlfriend, Bianca Wallace, an aspiring actress 20 years his wife’s junior whom he met on the set of the TV show he’d been filming in Australia.

Alice has since taken her fight to not be forgotten to TV, giving an interview a week and a half ago on Lorraine, in which she claimed her ex had cruelly unblocked her on IG just to show off his new relationship.

Related: Alice Drags Ioan’s Girlfriend As ‘Creepy’ For ‘Liking’ Photos Of Her & Their Kids Going Back YEARS

It was that interview that made radio hosts Kyle Sandilands and Jackie ‘O’ Henderson — of the world-famous Kyle and Jackie O Show — cry right there in the studio! The Aussie hosts listened on Friday, and the usually stoic Kyle admitted Alice’s story had “brought tears to my eyes.”

Jackie was shocked at his emotional outburst — and it sounded like he was, too! He added:

“I don’t even know that lady. I hate hearing people crushed emotionally. I don’t like it. Sorry, sorry, sorry.”

And it wasn’t long before Jackie O joined in on the waterworks over how Alice “broke the news to one of her daughters,” unable to hold it in as she emotionally recounted:

“She just showed her an article where the headline says, ‘Ioan Gruffudd is divorcing his wife.’ And she showed that to her daughter, she said, ‘Look. Read this,’ and her seven-year-old daughter began screaming and ran to her bedroom and said, ‘No, my daddy would never do that to my mummy.’”

Yeah, it’s a rough one, for sure. And we can’t imagine it was easier to take in person. But that’s what happened as Alice got booked as a guest on the show Monday morning.

The 102 Dalmatians star (she and Ioan were actually in the family film together) phoned in to the Australian radio show to answer any and all questions the hosts had.

First, her account of getting hit with the news just gets more devastating. She says she “did not see [the breakup] coming” as he had messaged her just days before returning to their home in LA — after weeks filming Down Under — to say he was counting down the hours until he saw her again. In a moment that made her start crying again, Alice recalled that just two weeks before coming home, he’d talked with her on the phone about a TV program he’d just seen about a widower and got all romantic with her:

“He called me up and said, ‘I’ve just watched that After Life… I can’t imagine what it would be like if I lost you.”

Then, per her account, he arrived home, refused to hold her, and told her he didn’t love her anymore. It wasn’t until later, Alice said, that she found out “he may have been cheating on me for two years.”

The pain of being dumped after so long, horrible as it was on its own, was doubled by the way he weaseled his way through it. Alice told Jackie O:

“He could’ve gone about it the right bloody way. He could’ve sat us down and said, ‘Look, this has happened. Let’s talk about it.’ And I would’ve been open to that.”

She then explained that despite the fact it’s common knowledge now, Ioan still hasn’t actually been able to face her and admit he moved on with a younger woman.

“He still hasn’t told me because now he’s ghosting me.”

On why he chose to just cut her off and reveal his new relationship the way he did? Alice does not mince words:

She also intimates it might somewhat be Bianca’s influence, adding:

“I don’t know her, I hear that she’s very pushy, but I don’t want to drag anybody that I don’t know.”

On speaking out, she said she felt for a while that she was “muzzled” and “gagged.” She actually knew she was being dumped for months but that she was being advised by friends not to tell anyone because it was “embarrassing.” So for a while she stuffed her pain down deep, like a dutiful piece of chattel being traded away. She recalled one very specific incident where she broke down at the OB-GYN while trying to keep his decision a secret:

“You go to your gynecologist, he goes, ‘Hey, how’s the lovely Ioan?’ … and I would burst into tears and say, ‘No it’s just something else.’ It’s just awful.”

Finally she opened up, revealing that he was leaving her and refused to speak to her. She said in that first post:

“Sad news. My beloved husband/soulmate of 20 years, Ioan Gruffudd, has announced he is to leave his family, starting next week. Me and our young daughters girls are very confused and sad. We haven’t been given a reason except that he ‘no longer loves me’. I’m so sorry.”

Oof, still so heartbreaking. But being open and honest, she said, has been like “releasing some kind of cut.”

She also accused Ioan of “gaslighting” her — living this double life pretending everything is fine while talking trash about her on set and apparently hooking up with a hungry extra. She said:

The 50-year-old made another point about the position her husband had put her in: she basically gave up her own acting career to be a stay-at-home mom for the kids so that he could fly all over the world to film. She only started her “little Instagram” for fun because she didn’t have acting in her life. And now he’s upset that she’s using her social media to talk about the awful thing that he’s done to her??

Alice also revealed that Ioan — who she’s said previously is trying to get custody of the kids in the divorce — hasn’t even seen his daughters in four months. He’s currently filming in the South of France, and she offered to take the girls to visit their father — and he said no, making the excuse that there just wouldn’t be time with all the work he had to do on set. It wasn’t until the reveal of Bianca’s presence there with him that she suddenly knew why he wasn’t interested in having his daughters come to visit.

You can listen to the full interview HERE.

After the interview, she posted to her IG once again, this time to break down how she felt the interview went.

She shared with her followers that the KIIS hosts were “adorable and very laid back” but that she suspected they didn’t share the exact same view of her:

“I was on the Kyle and Jackie O show today. Jackie was incredible although I sensed Kyle was a little more on the fence about what was driving me. I can see that it’s easy for me to come a toss as a person who has been hurt and is angry and wants to hurt back. I don’t think that would be sufficient enough of a motive for doing this, if such was the case.”

Going deeper into her answer to cynics like she suspected Kyle was (we guess she didn’t hear him crying last week), she explained:

“He asked me the same question most have been asking me: Why did you decide to do this? The question always trips me up because I try to be 100% honest in everything I do. And as far as the ripple I’ve set off which has brought letters, emails, messages to me from all over the world saying they wish they’d had a voice… that makes me feel really proud of myself. Takes away the fear somewhat. “

“I think on a personal level, however I did it because I had no other choice. I was gagged, blinded and lies were being told about me. Lies that I was supposed to just accept, because I had no power.”

Everything changed when she broke her silence:

“When I spoke out on SM after almost six months of crying every night, driving my friends round the bend it felt like somebody had lanced an enormous cyst on my body, I could physically feel the pressure releasing.”

“That’s so gross can’t think of a better way to explain it.”

However, the intent is spot on. She added:

“There’s nothing wrong with calling out a man who is telling awful stories about you, smearing openly and then telling you it’s your fault.”

One last inneresting note: Alice actually took a moment to defend Ioan for once, or at least the Ioan that she used to know, writing:

“PS A last thought occurred to me. That this is very much about my husband’s choices, his behavior, not the man himself. For 20 years he made me very happy and when our little family came along I was the happiest I thought I could be. It’s just he wasn’t, it would now seem, and the way he chose to convey that to us lacked courage and caused way more pain than was necessary.”

Seems fair to us.