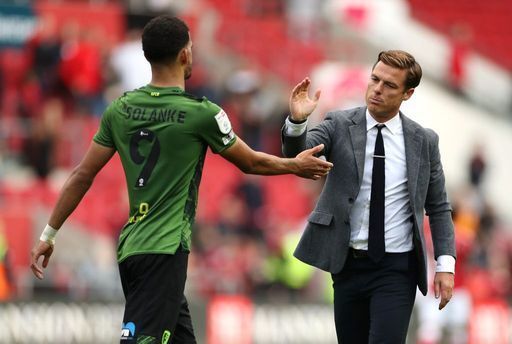 SCOTT Parker would love to tie down star striker Dominic Solanke with a new deal – with the Cherries boss claiming: “I want him at this club as long as I can have him.”

Solanke joined Cherries from giants Liverpool in January 2019 for an initial reported fee of £17.5 million, with the striker signing a “long-term” deal understood to expire at the end of the 2023/24 season.

Whilst only finding the net three times in 42 Premier League appearances for Cherries, Solanke has come into his own since the Dorset club dropped to the Championship.

After notching 15 goals last campaign, the 24-year-old nearly doubled his output this year, striking 29 times from 46 games, helping to fire Cherries back into the big time.

Head coach Parker has continuously praised his leading man throughout the campaign, previously stating that: “I don’t think there’s a centre forward in the Premier League or the Championship that would be pumping out the physical numbers Dominic Solanke pumps out.”

Since the end of Cherries’ campaign the rumour mill has started churning out stories that clubs are now looking at the one-time England international.

But, speaking before the end of the season, boss Parker is keen to ensure the former Chelsea man stays at Vitality Stadium.

When asked if the thought of offering the Basingstoke-born striker a new deal had crossed his mind, Parker responded: “Yeah, I’d like to (offer him a new deal), definitely.

“Dominic Solanke is a top centre forward, in my opinion.

“Again, I don’t know the full ins and outs of Dom’s contract.

“But from my side, I want him at this club as long as I can have him.”

Over the past two Championship seasons, only Fulham’s Aleksandar Mitrovic has contributed more goals and assists.