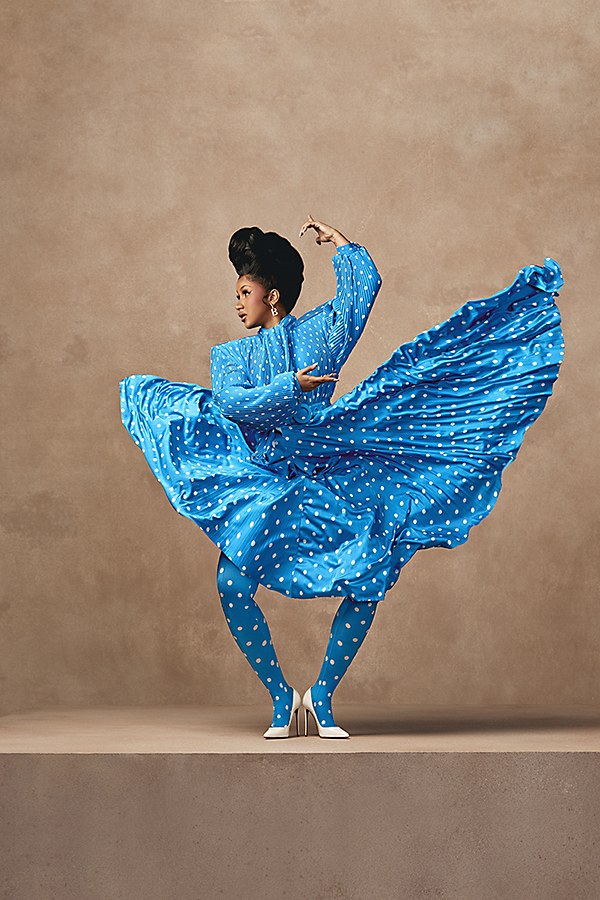 Photographers are often seen as singular artists whose individual sensibilities make, or break, an image. Perhaps that is why photography duos are so rare, which is part of what is so intriguing about the partnership of Ahmad Barber and Donté Maurice. Known professionally as AB+DM, the inimitable Atlanta duo have moved from relative obscurity to hot commodity in record time, with their striking imagery showing up everywhere from Town & Country to Essence to Marie Claire to XXL.

When I finally connect with AB+DM, it’s the spring of 2021, and COVID-19 appears to be in cautious retreat across the United States. I am expecting them to tell me that they are getting back to work in earnest. As it turns out, they have just come back from a quick-turnaround shoot in New York.

“We started traveling and working again when COVID was pretty much at its peak,” Maurice says, before Barber adds that other than a short break for the holidays, they have been busy for a while. “We go through super busy weeks, then we take two weeks off doing post-production, then get into a tizzy of traveling,” Maurice says. Most recently, that has meant going back-and-forth from Los Angeles, with a few days in Miami thrown in, and an unexpected trip to Tennessee to photograph outfielder Mookie Betts for GQ. Navigating COVID protocols across state and city lines has been its own experience.

The two came to photography through different means, which illuminate their individual personalities. Maurice, laser focused as always, was an aspiring actor who had never given much thought to another career. That dream was shattered when, still in high school, an agent told him that he wouldn’t make it as an actor. It was an event that badly damaged the young artist’s self-confidence, and in the beginning, photography was a refuge from that painful experience. He started out by making self-portraits, and, upon arriving at Georgia State University to study film and media, began to form a group of people who were willing to sit for him. Pretty quickly, he knew that photography was what he wanted to do. “I worked part-time in college in PR, and I knew I wasn’t meant to be behind a desk, and I was willing to risk going full-time. I also had loving and supportive parents who believed in me,” Maurice explains, before deferring to divine intervention. In typical fashion, he dove in headfirst, using Tumblr and, to a lesser extent, Flickr to find inspiration and educate himself on the technical aspects of the craft. He landed his first commercial photography gig while still enrolled at Georgia State, and never looked back.

For Barber, a self-described introvert and “emo kid,” photography was a tool to connect with other people and express his emotions. Growing up in a tight-knit family in Detroit, Barber received his first camera as a gift from his grandfather. In high school, his classmates would see their own photos on Facebook, taken by him at a party the week before, and ask him to make their portraits. Even after he enrolled at Morehouse College as a STEM student, he never shook the photography bug. “I still really loved to produce images, loved to connect with people in that way,” he says, “and as I got older and began seeing that photography was a viable career, then it was like, ‘Let me finish my degree [in biology] and then I have that as a backup.’” Making use of every resource he could, he meticulously researched techniques, gear and equipment, then created test work with his equally ambitious friends, all of them eager to break into the industry. These early collaborations would prove valuable by providing Barber with professional connections to emerging makeup artists, stylists and other local talent.

When the two photographers discovered each other’s work in the mid-2010s, each found himself drawn to the other’s completely different aesthetic: Maurice to Barber’s use of light and color, and the way he posed and angled his subjects. Barber to Maurice’s ability to bring out the personality of his models, the ease and familiarity in every photo, and his use of toning. “We clicked immediately because we get each other so well, we understand each other’s humor and we respect each other,” Maurice says. Their mutual admiration swiftly blossomed into friendship and collaboration, and they formed AB+DM in 2018.

AB+DM’s first big break came in the form of an assignment for Billboard in December 2019. Maurice had worked with the magazine several years prior, but when they were approached about shooting a cover for the City Girls, a rap group that was making waves, they were excited. That excitement went up several notches when they looked at the call sheet and saw celebrity stylist and reality TV star Law Roach’s name. “We both ended up connecting with Law Roach in a way that allowed our breakout moment of shooting Zendaya for InStyle magazine to happen,” Maurice says. “Things grew really, really fast after that job. It propelled us forward right before COVID hit.”

We clicked immediately because we get each other so well, we understand each other’s humor and we respect each other,” —Donté Maurice

When leafing through their growing portfolio, it’s surprisingly hard to put a finger on what exactly constitutes AB+DM’s style. Their published work varies greatly in concept and composition, yet somehow nothing ever seems like a reach or an affectation. Perhaps that’s because although they are both great photographers, Maurice’s and Barber’s abilities and aesthetic are not similar so much as they are complementary.

“The way we balance is that my solo experience directly contrasts and conversely relates to where Donté is,” Barber says. “I had made up my mind that I wanted to work in fashion and advertising, so I focused on editorial, on how garments move and how people move. Whereas Donté is more portrait based, more intimate, more about personal connection.”

These differences enable them to cover all the bases efficiently. Ever the “nerd,” Barber tends to be very focused on things like equipment and gear, lighting setups, and the shot list, and is more likely to communicate with the client before the shoot. Meanwhile, Maurice is most often charged with finding the story they are trying to tell and usually handles the subjects, not hesitating to strike a pose if a model needs direction.

Their meteoric ascension has not been without its learning curves. Their third big gig as an official duo was a feature on basketball phenom Zion Williamson for Men’s Health magazine. It was a location shoot in New Orleans, and because of travel restrictions, they had to formulate a plan with nothing more than Airbnb photos to judge potential spaces. Unsurprisingly, when they arrived, the place they had chosen was significantly smaller and less lavish than it had appeared online, which forced them to move the shoot outside. Additionally, they had been assured by New Orleans natives that it was not going to rain.

“The whole morning we are setting up, lights are locked in, everything looks perfect, the client is happy. Then about ten minutes before talent is about to come out, it starts to drizzle, and keeps drizzling through the whole first look, but we have to keep shooting because we only have the talent for a certain amount of time. So that shoot taught us we need to have a plan B, C, D and E as far as equipment, and not to ever play with weather,” Barber says.

I had made up my mind that I wanted to work in fashion and advertising, so I focused on editorial, on how garments move and how people move. Whereas Donté is more portrait based, more intimate, more about personal connection.” —Ahmad Barber

When it comes to equipment, speed and flexibility are musts for the duo. Lately, they have been favoring the Canon 5DS or the Canon Mark IV and Profoto lighting. In post-production, Barber usually takes on the task of file management, sending their joint selections to the client before the duo take another pass at the images. “We are blessed to [know] an amazing retoucher, Rafael Sochakov, who we have been working with
on every job since Zendaya. I’m probably the one [retouchers] hate because I am always zooming all the way in and circling stuff,” Barber says with a laugh. “Then, once that is done, Donté handles toning, which is something that adds a little more character to our work.”

After all this time together, the distinctions between them have blurred as both have learned from each other, perhaps even more than they realize. Maurice came to the partnership with a minimalist approach of just him, the subject and one light, but working with Barber opened him up to more lighting options and expanded his palette. For his part, Barber says Maurice helped him come out of his shell and loosen up. Now he is more willing to be in the moment, taking whatever comes and leaving room for intuition and play.

Neither man has ever had a mentor, which is something that is often the case for African American commercial photographers in a field that has traditionally been overwhelmingly White. But Maurice posits that Barber has been a kind of mentor to him. “He taught me how to work as a team because he had those experiences, whereas I had always done everything on my own,” Maurice says. “Another thing I learned from Ahmad was to just calm down and let things happen. Before, if something negative happened, I would go into a spiral and get mad, but he is like, ‘Nah, relax, step away and come back to it.’”

Despite how rare long-term collaborative work is in the photography field, AB+DM are characteristically confident in their shared vision. They no longer take individual work and are jointly represented by The Only. It helps that they are really good friends whose personalities complement each other in much the same way as their artistic talents. Barber describes them as yin and yang, before Maurice chimes in, “Every time we’re around each other, it’s a good time, and it’s hard to find that with people in the same field.” ca