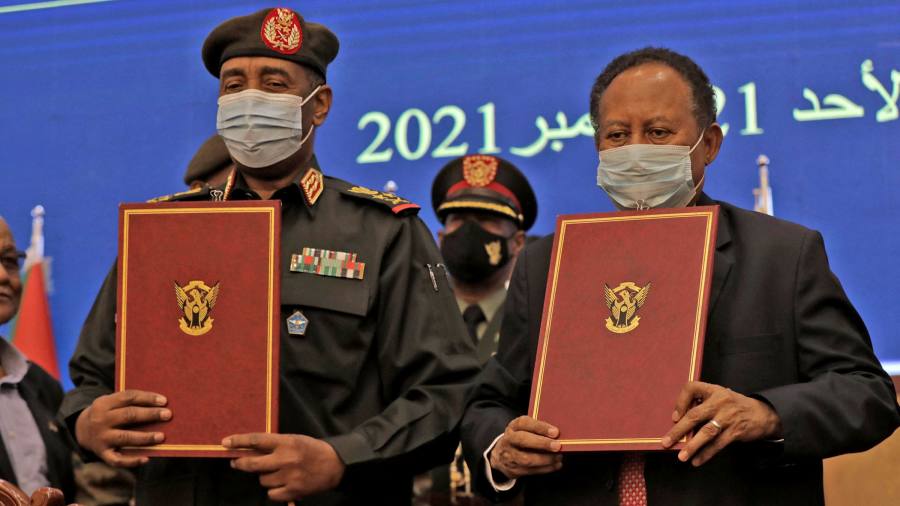 Sudan’s civilian and military leaders have sealed a deal that reinstates Abdalla Hamdok as prime minister almost a month after the army seized power and put him under house arrest.

The agreement signed on Sunday by Hamdok and Abdel Fattah Burhan, Sudan’s top general and the coup leader, restores the civilian element of the country’s transitional government, paving the way for elections in 2023.

The 14-point pact is aimed at reverting to the terms of a transitional agreement that brought both men to power in 2019 as part of a hybrid government, which shares power between the military and civilians and oversaw Sudan’s administration after the fall of longstanding dictator Omar al-Bashir following months of protests

It also provides for the release of all political prisoners detained since the October 25 coup, which spurred mass protests, condemnation from the US, the country’s suspension from the African Union and the freezing of World Bank aid.

Tensions had been brewing for several weeks between the civilian and military sides of the transitional government before the army takeover. Burhan had been supposed to hand over chairmanship to Hamdok this month, marking the first time in decades that a civilian would have led Sudan.

“When I then accepted the designation as an interim prime minister, I realised that the road was not strewn with roses, it would be a daunting task, fraught by risks and dangers,” Hamdok said at the signing ceremony. “However, by joining hands, we can . . . prevent our country from plunging into the unknown.”

Calling for an end to “the bloodbath” of recent weeks — in which at least 40 people have been killed in a crackdown by security forces, according to a Sudanese doctors’ committee — he added: “This agreement will bring down the tension.”

Burhan, who has previously denied the military takeover was a coup, said Hamdok, who had been under house arrest for much of the past month, “was always the subject of our confidence and respect”.

He added that Sunday’s agreement “will pave the way for a total and complete transitional period” and pledged to “march forward until we reach a transparent, democratic election and peacefully and safely cross towards total civilian government and total democracy”.

Protesters on the streets of the capital Khartoum on Sunday said they rejected the deal, calling it an attempt at giving in to the military.

Wrapped in Sudanese flags and chanting “there’s no going back to military rule”, referring to the 30-year dictatorship of Bashir, they continued to erect barricades and face off with security forces.

Amanda Hindi, a 25-year-old pharmacist, was protesting alongside dozens of others on a main street in the city’s Al-Zohur area, where a protester was killed this weekend. “Even if Hamdok says it, we don’t want a deal, we don’t agree to a deal,” she said. “We want a full civilian government — that’s it.”