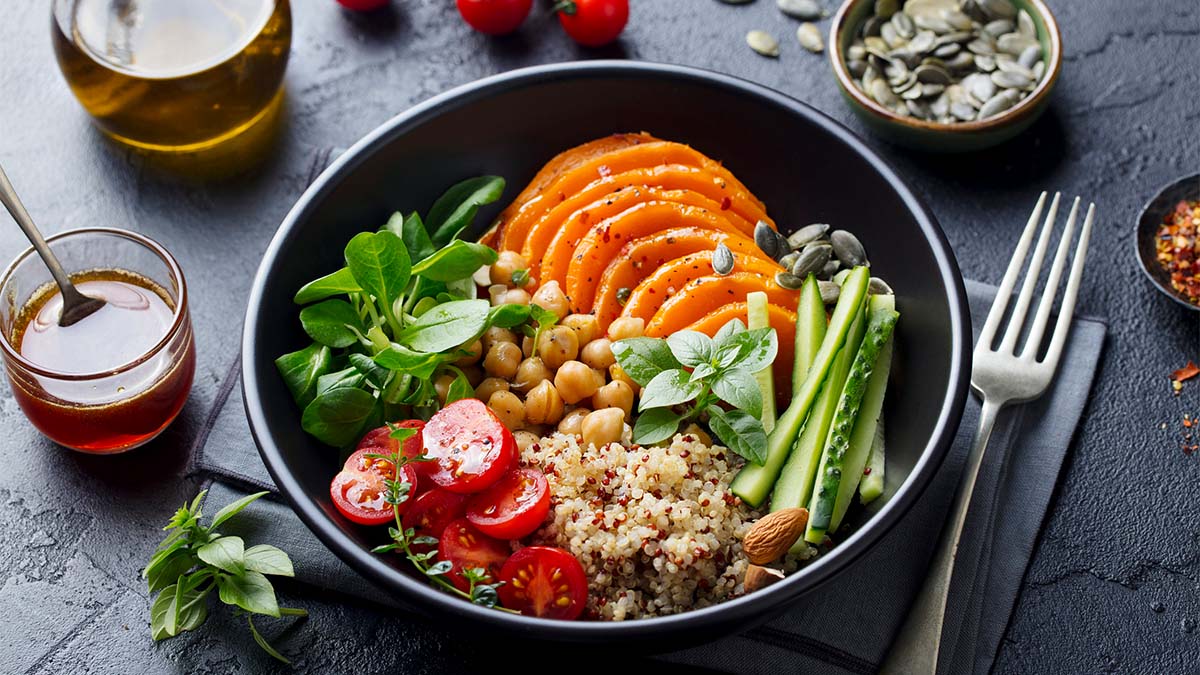 Usually, we think about going on a diet as a way to help us shed unwanted pounds. But there are plenty of good reasons besides weight loss to change your eating habits — and people who want to cut down on the number of prescription medications they take would do well to take a closer look at what they eat. New research has uncovered promising findings indicating that adopting a vegan diet — meaning avoiding all animal products — can help adults take less medication on a daily basis.

A recent study published in the American Journal of Lifestyle Medicine looked at the connection between dietary habits and polypharmacy, the scientific term for regularly taking five or more prescription medications. Polypharmacy is common among older adults, and can lead to severe health troubles including cognitive impairment, falls, and negative side effects to multiple medications.

For this study, which took place between between 2015 and 2016, 328 participants ages 60 and over completed surveys about their everyday medication routines and what kind of diets they followed. Study co-author Alaa Alabadi, MPH, DrPH(c), tells Woman’s World that the most common medications participants took were to treat high blood pressure and heart disease, and that over-the-counter medications such as Tylenol and vitamins were prevalent as well.

The Benefits of a Vegan Diet

Researchers ultimately found that participants who stuck to a vegan diet took 58 percent fewer prescribed pills than non-vegans. A vegan diet calls for cutting out fish, meat, dairy, eggs, and all other products that come from animals, and replacing them with plant-based foods such as fruits, vegetables, grains, legumes, and nuts.

While this is a significant study finding, Alabadi says it didn’t come as a surprise. “I was expecting these findings, due to the nature of the study population,” she explains. “As we all know Loma Linda [CA] is one of the “blue zone areas” and the residents here are mostly healthy.”

The “blue zone areas” she refers to are regions across the globe where people are more likely to eat healthy and live longer (not to be confused with political “blue states” and “red states”). Thankfully, you don’t need to move to a different zip code to change your diet and reduce your reliance on medications.

How to Start a Vegan Diet

The idea of going vegan might seem intimidating, but it’s easier than you think: There are a few simple things you can do to start incorporating a vegan diet into your everyday routine. A great place to start is to include more plant-based sources of protein like mushrooms, beans, and leafy greens in your diet, rather than relying on meat. You can also find meatless versions of sausage and chicken if you’re looking to mimic the real thing. For dairy, oat milk and almond milk are great options to use in your morning cereal and coffee. Try them and see what you like best!

It’s always a good idea to check with your healthcare provider when starting a new diet or trying to go off any prescription medication — but taking some baby steps toward a vegan lifestyle is a healthy start in the right direction.