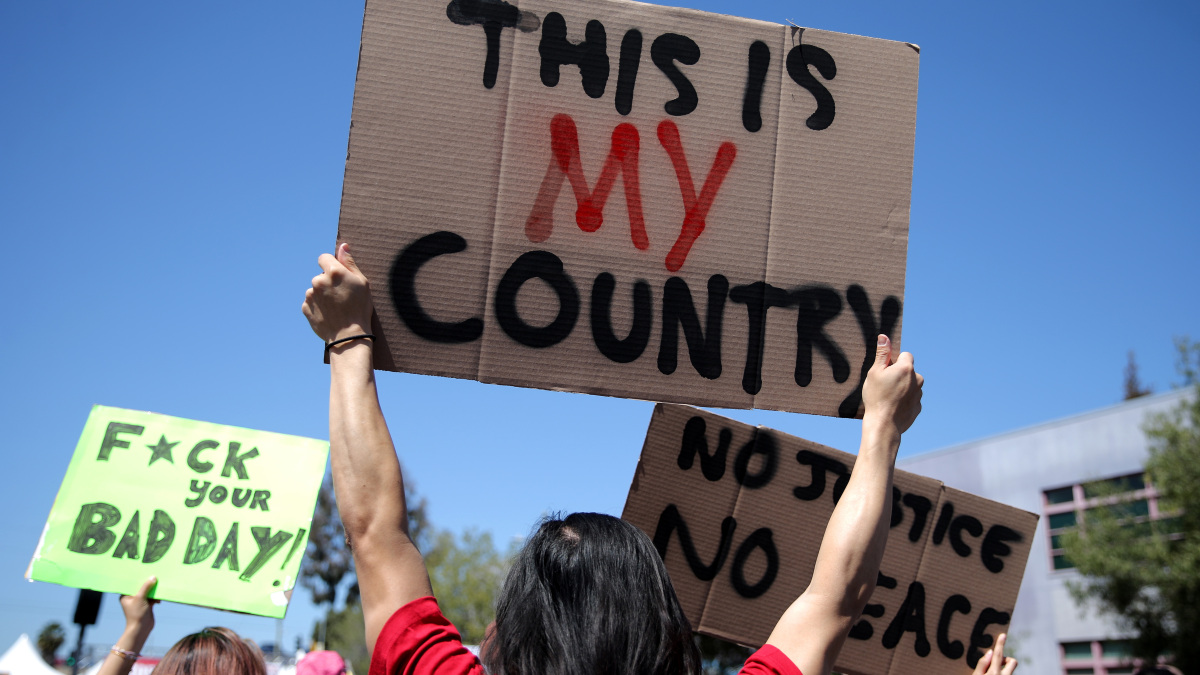 Biking down the street or riding the bus in Los Angeles, Candice Cho isn’t doing anything particularly unusual — stranger things happen on the streets of Hollywood every day. And yet her existence as an Asian woman is enough for many to unleash swarms of verbal, often racist abuse. “Hey Mulan!” one man shouted at her while biking. “Konnichiwa! Tokyo!” another yelled at her repeatedly as she waited 30 minutes for public transportation.

Such experiences are unfortunately common for many women, especially women of color, and also deeply relevant to Cho’s work. She’s the managing director of policy and counsel at AAPI Equity Alliance, a Los Angeles–based coalition of AAPI community organizations campaigning for equitable policy and services for community members across the country.

Cho’s story is just one representation of a diverse array of tales shared through the #SaferPlace social media campaign, a new effort by advocates to document the frequent harassment that women, people of color, and LGBT and gender nonconforming people face in public spaces. As May is Asian and Pacific Islander (API) Heritage Month, the social media effort adds a sense of heightened, nuanced awareness of the intersectional public safety issues faced by members of these diverse communities.

“Street harassment may not be violent, but it’s still traumatic. It still impacts how safe we feel, our mental health, how free we feel to move and to care for ourselves and our loved ones. These different facets of hate need to be treated seriously,” Cho said.

The campaign is making a larger case for re-contextualizing street harassment as a public health issue, similar to the way our understanding of common tobacco use or car seatbelts evolved over time as public safety concerns regulated by the government, the organizers explained. Yamuna Hopwood is the communications manager for Chinese for Affirmative Action, a progressive advocacy group championing immigrant rights, language diversity, and racial and social justice advocacy. She’s helping lead the social campaign. “We kicked off the campaign with a simple question,” she says. “We were asking, ‘What would a safer, more accessible place mean, for you?’ And not just AAPI individuals, but everyone — Black and brown folks, LGBTQIA folks, disabled folks, anyone who struggles with street harassment or the fear of street harassment.” Hundreds of people responded with their experience, fears, and hopes for safer public spaces under the #SaferPlace hashtag across social media.

Both Chinese for Affirmative Action and AAPI Equity Alliance are founding partners in the Stop AAPI Hate coalition, which was launched in March 2020 in response to a (continued) rise of racist attacks on Asian communities corresponding with the spread of COVID-19. The coalition tracks incidents of hate and harassment among Asian Americans and Pacific Islanders, and engages in nationwide policy and awareness campaigns. “We have received nearly 11,000 reports since the start of the pandemic, and the majority of them are from AAPI women. They are about being verbally harassed, often racialized and sexualized harassment, in public spaces,” Cho explained. And those numbers are just among a single, vulnerable population.

One #SaferPlace participant, Luna, shared her experiences as a Black trans woman working and commuting in San Francisco’s Transgender District. “Before we leave our job, before we leave our house, before we go to the store, we feel this anxiety of, ‘What is going to happen?’ Everywhere we go — even among people who say that they accept us — there is still this anxiety of ‘What can they say?’ and ‘What can they do?’” she wrote.

We don’t generally talk about our experiences with street harassment. We just carry that with us

Another participant, Sally Chen, tweeted a common #SaferPlace refrain — the fear of being in public and alone. “When I have to wait too long for the bus at night, especially by myself, I watch the time pass in fear. I want a #SaferPlace to actually spend time with my important people, without having to count the minutes on my own safety,” Chen wrote. Even more users on Twitter and Instagram shared similar fears of violence and a widespread sense of uncertainty when out in public.

To fight against that narrative, Cho said that #SaferPlace is one part of a larger push to recognize street harassment as a structural, institutionalized problem that demands a response on the same scale. The campaign is the latest in a larger political effort demanding state-level legal protections for women and other vulnerable populations who frequently face harassment and violence in public spaces. The “No Place for Hate” legislative package was introduced in February by California State Senator Dave Min and assembly members Mia Bonta and Dr. Akilah Weber, who co-sponsored it with Stop AAPI Hate. The bills cover a range of public spaces, including protections for those on public transit and a proposed statewide education campaign against street harassment. A third seeks to extend civil protections against public harassment to large businesses. All three bills are currently under discussion in committee.

“Even though these bills really grew out of the stories and the experiences that are shared by API women with us, the bills are for all communities who are harmed by this kind of hate,” Cho said. “Black and Latinx communities, women, LGBTQIA people, young girls. We really see this as addressing harm against all of our communities in public spaces.”

Hopwood and Cho encourage all kinds of people to go to Twitter and Instagram to share their stories, fears, and support for victims of street harassment to drum up support and place pressure on leaders to address the public safety issue. They say these stories can be personal experiences, expressions of worry for your loved ones, or instances of calling out abuse by those in more privileged and powerful positions. If you’re in California, they ask you to put pressure on your state representatives to support the No Place for Hate bill package and protect people in public spaces — the passage might even inspire more states to take similar action. Currently, street harassment legislation is reserved to city-level protection, which exists in places like New York City and Washington, D.C.

“The bills and the campaign speak to our fear of being alone, but they also speak to our hopes for something better,” Cho said. “They’re about our imaginative capacity for the world we all want to live in, where public spaces are truly public.”