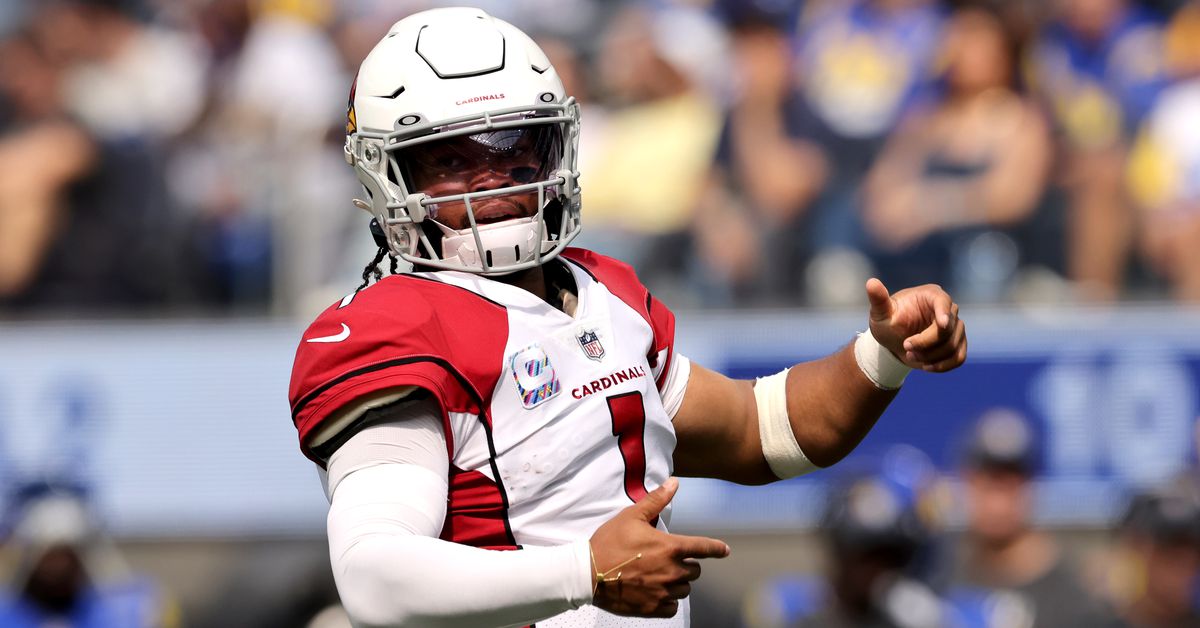 I’m drinking the Cardinals Kool-Aid, big time. I’ve been warned against falling for its intoxicating scent. Given reason not to give in to its sweet promises. But dammit, at this point I’m willing to take a big swig, even if it kills me.

After the first week of the season I noticed this was a very, very different Cardinals team to the past. There have been established expectations for Arizona that existed long before the Kliff Kingsbury era. They established themselves as a team that lived or died by the pass, with almost nothing else to show for it. There are times this approach has worked well, like the 2008 team that made the Super Bowl — but what is often forgotten about that team is just how average they were.

Kurt Warner having one last run made for a heck of a story, but this was a really bad team propped up by a hell of a playoff run. The Cardinals went 9-7, in the regular season, had the worst rushing attack in the NFL, and a defense that was in the bottom third of every statistical area. The narrow loss to Pittsburgh for the Lombardi Trophy was the absolute maximum juice that could ever be squeezed out of that orange.

We know that Kingsbury’s approach was bold. He was taking the Air Raid offense and porting it over to the NFL, and for a while it seemed destined to follow in the path of other bold offensive choices that flourished, before fizzling and failing.

Now in 2021 it’s working, or it would be if this was a true Air Raid. Calling what Arizona is doing by any label would be inaccurate, because they’re absolutely unique. Sure, the bread-and-butter of the offense is overwhelming teams through the air with a host of weapons, but the running game has increasingly become a focal point — and it’s been trending this way for a couple of years.

The concept that the Cardinals are marked by Kyler Murray throwing 50 times a game is definitely true at times, but not in 2021. Rather, they’ve been remarkably balanced. Murray has thrown the ball 134 times this season, while the team has run the ball 114 times. This near-parity has positioned Arizona as 19th in the NFL in passing attempts, and 11th in rushing attempts.

This offensively balance was on full display against the Rams, who really didn’t have an answer defensively for the Kingsbury approach. Now with a 1-2 punch of Chase Edmonds and James Conner at running back as their shifty and power back respectively, there are just infinite ways this Arizona offense can attack you — and this season they’ve finally found a defense that’s good enough to get the job done as well.

A win over the Rams is of extra significance to Cardinals fans, who have seen this team struggle so much against Los Angeles in recent years that it’s their Moby Dick. Entering the game on Sunday Arizona had never beaten the Sean McVay led Rams, with an 0-8 record against them. Now sure, 1-8 isn’t much better — but that’s a very important symbol. In doing so it’s also catapulted Murray into potential MVP conversation, even though the season is young.

In four games Murray has been, well, incredible. He’s thrown for 1,273 yards, which projects to well over 5,000 on the year. While his 9 TD to 4 INT ratio is good, but perhaps not incredible — it’s really two other statistics that jump out to me. Murray is completing a ludicrous 76.1 percent of his passes, while converting at yard-per-attempt of 9.5. Keep in mind that averaging over 8.0 is normally a sign of an elite quarterback, and this number is just astonishingly good.

Oh, have we mentioned he can run too? 109 rushing yards for three touchdowns this season. Nothing to exactly write home about, but he’s also been incredibly efficient on the ground when needed — averaging 4.7 yard-per-carry.

What this means in totality is that Murray makes everyone’s life so much easier because he’s locking down an entire phase of the game. It’s meant that the defense doesn’t need to be in world-beating form, just enough of a speed bump that it’s impossible to hang with a team averaging 35 points a game and succeeding against everyone they’ve faced.

Now at 4-0 and coming off a big divisional win over Los Angeles I’m ready to double down on the Cardinals this season. They are that damn good, and this could be their best season ever.

It’s not like beating the Panthers is some huge statement game that solidifies the Cowboys in the NFL elite, but there’s a trend to this 3-1 team that’s worth following: Their offense is extremely good, and very difficult for teams to manage. Dallas hasn’t really had an easy “gimme” game this season so far, and they’re still on the right side of the ledger.

Time will tell whether their offensive explosion against Carolina is an indictment of their defense just not being as good as we thought, or if it’s a case of how good the Cowboys’ offense is — but either way this was an important win to take a grip on the NFC East.

In the next four weeks Dallas plays the Giants, Patriots, Vikings and Cowboys — which could absolutely position them at 7-1 as they reach the halfway point in the season.

If you lose to the Jets you’re a loser of the week. I don’t make the rules around here, I just enforce them.

Winner: The Panthers and Broncos

This was a major statement week for both teams who entered Sunday at 3-0, but neither of whom really had an actual test. When the dust settles I think fans of both teams should remain pretty excited about their teams.

Carolina definitely made mistakes on Sunday, and their defense was exposed by Ezekiel Elliott — but without Christian McCaffery on offense the team still made this a one score game. Assuming McCaffery isn’t out too long there’s every chance this team can get back on track and continue to surprise this season.

Meanwhile the Broncos deserve plenty of props too. The scoreboard might not appear too favorable, but Denver was able to hang very close to Baltimore up until Teddy Bridgewater was forced out with a concussion. The game got away from them after that point, and it became clear a comeback wasn’t in the cards, because Drew Lock is terrible, but this is another case where I think Denver can move past this and put together a good season.

Even if 2021 isn’t the year in Carolina or Denver, both teams are showing that they’re trending in the right direction.

‘Nuff said really. You can find the video, I’m sure.

The Chiefs are a bit of a mess this season if we’re all being honest. Defensively Kansas City has been one of the worst teams in the NFL, and when that side of the ball is so bad that Mahomes can’t bail you out, well, you know there’s trouble.

That aside, we can’t just ignore a player throwing five touchdowns — even if it meant just a 12 point win over the Eagles, who are lost and confused this season.

I don’t think the Chiefs have it in 2021. There are just too many issues on defense to imagine this team making a playoff run in a division with the Raiders, Chargers and Broncos (who are better than expected), and I just realized that’s an actual sentence that I said, and not as a joke.

This is all so wild. This season rules.

Loser: Everyone who sat through the Patriots vs. Buccaneers broadcast

The game between Tampa Bay and New England was fantastic. Easily one of the best of the weekend — and it was absolutely ruined by how far the hyperbole in this match was pushed.

Every Patriots series we heard Cris Collinsworth talk about what a win over Tom Brady would mean to Mac Jones. Whenever Brady made a throw there was a cut away to show him warming up before the game, walking into the stadium or hugging Robert Kraft.

Then, just when you thought “this game is so great we don’t need to rely on Jones vs. Brady being a thing,” NBC played this video of Patriots fans leaving voicemails about Brady like it was call in radio, and it was awful. People saying they felt like Tom betrayed them, others saying watching him win a ring in Tampa was tantamount to seeing an ex get married.

Anyway, Mac Jones was good. The Patriots have a solid foundation, the Buccaneers are still the dangerous — and we just didn’t need any of this.