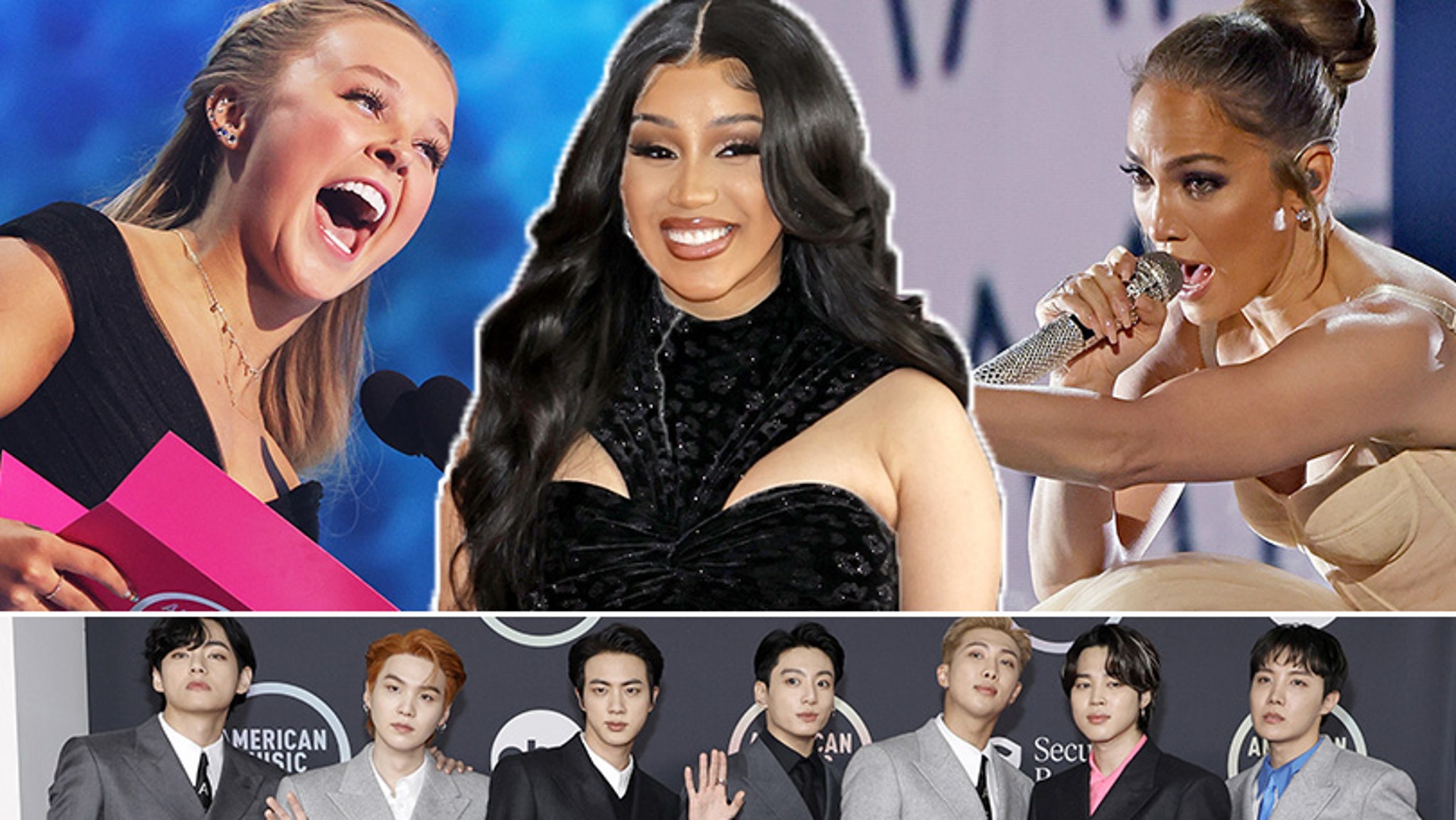 Cardi B takes multitasking to the next level by hosting an awards show and booking a private party for daughter Kulture — at the same time!

It was hard to tell who was more excited about the “American Music Awards” going live with the unmistakable energy of a live audience, the members of that audience or the 2021 host, Cardi B.

Cardi was having a blast all night long and her energy proved infectious, and persuasive. Not Mama Cardi booking a live appearance by JoJo Siwa for daughter Kulture while hosting an awards show! She even hilariously cut her own acceptance speech short after a big win because, “I’m hosting!”

Cardi B Geeks Out After Meeting Robert Pattinson: ‘I Felt Like a Teen’

.@itsjojosiwa, you get all 10s from us! Thanks for stopping by to present Favorite Pop Duo or Group at the #AMAs. 🌟 pic.twitter.com/H5MNrKyZ9q

Olivia Rodrigo came into the night with the biggest number of nominations, with seven total, but it was probably the collaboration between BTS and Coldplay that got the biggest audience reaction even before they started singing!

Bruno Mars and Anderson .Paak’s Silk Sonic duo kicked off the star-studded night of musical performances, which included appearances by Olivia Rodrigo, Jason Aldean & Carrie Underwood, Kane Brown, Tyler the Creator and the boy band showdown of the century with New Edition and New Kids on the Block.

Check out the night’s most viral moments below:

Celebs Who Are Already Ready For The Holiday Season

Easily one of the most anticipated performances of the night, the audio sounded like an absolute mess as Coldplay’s Chris Martin took the stage to perform alongside mega-sensation BTS.

The result was a high-energy cacophony of noise that sounded like excited people just jumping around and screaming — and we’re talking about the eight singers on the stage. Either the mix was off, or they were, but nothing was working.

By the time the performance ended, it sounded as if it just blended in with the roar of the crowd, who were chanting “BTS.” The live audience probably didn’t care that it was barely recognizable as “My Universe”; they were just excited to be in the presence of the biggest stars on the planet. And Chris Martin.

Coldplay and BTS sound like two cats tied together over a clothesline. They sound awful #AMAs pic.twitter.com/mcrvvI8cPi

What happen with that sound and that cameraman pic.twitter.com/d5VN40wVmG

Coldplay and BTS sound like me and the boys at drunk karaoke on Thursdays. #AMAsBTS #AMAs #Coldplay #ColdplayXBTS #The AMAs #MyUniverseAMAs

Coldplay and BTS look and sound like they rehearsed one time. #AMAs

Easily one of the most surreal moments of the night, Cardi took off her host hat for a moment and put on her mom one to take advantage of the unique opportunity in front of her. Giving shout-outs to various stars in the audience, she had a special message for JoJo Siwa.

“My husband, he was trying to get JoJo Siwa, right, for my daughter’s birthday party but she is booked and busy. So JoJo Siwa, could you please come see my daughter for Christmas?” she said, basically calling JoJo out publicly.

Just a few moments later, JoJo herself hit the stage to present an award, and she had an answer for Cardi — making the case for mother of the year with this one. “Cardi, I’m gonna see what I can do,” JoJo promised. “I’m gonna try to make Christmas happen, I promise. Putting it in my phone right now. I take Bitcoin.”

She then gave perhaps the most shameless plug we’ve ever seen on an award show, taking back the Bitcoin joke to instead say she would rather just have votes for Monday night’s “Dancing with the Stars” finale. She went so far as to give the voting times, the number to vote for her and everything.

JoJo is already a front-runner to possibly take home the Mirrorball Trophy this season, but if she does win, there are certain to be some looking to this moment to see if this made a difference at all. We didn’t see any of the other finalists plugging themselves tonight!

Cardi B said Offset tried to book JoJo Siwa for Kulture’s birthday but she was booked: “Y’all rappers ain’t got nothing on JoJo Siwa” #AMAs

Cardi B really shot her shot with Jojo 😂 #AMAs

Damn Jojo siwa that booked that Cardi had to try to get her by mentioning it in the awards. #AMAs

J.Lo Kills It Live … Or Is It Memorex?

Jennifer Lopez has been a triple threat for years, but it’s possible that she just gave her best-ever live televised vocal after all these years in the industry. It turns out her incredible physique isn’t the only thing that seems to be improving with age.

Not only is J.Lo making a long-awaited return to the big screen with a romantic comedy — still one of her favorite formats among fans — opposite Owen Wilson for “Marry Me,” but she’s bringing some of the best music of her career along with her.

Like Paul Rudd and Denzel Washington, J.Lo has long looked timeless, but even as her appearance doesn’t seem to change, her vocal ability appears to be getting stronger and stronger.

If that was her singing, that is. Twitter isn’t so sure, with online sleuths debating whether or not this was live or lip synch.

So are we supposed to believe that is Jlo singing live at the #AMAs pic.twitter.com/tANASVl5kG

As a kid, I used to lip sync into my hairbrush with more accuracy and realism than J Lo’s AMA performance. #jlo #JLoAMAs #AMAs pic.twitter.com/punaXqfYls

Now they know that ain’t jlo singing that… #AMAs pic.twitter.com/2U8LmGTOqJ

Nobody is gonna make me believe that Jlo is singing live. Everybody has had audio issue, expect her ….
( anyway love the vocals ). #AMAs pic.twitter.com/H4OQ3SW1ce